Young women making strides in IT through mentoring programme 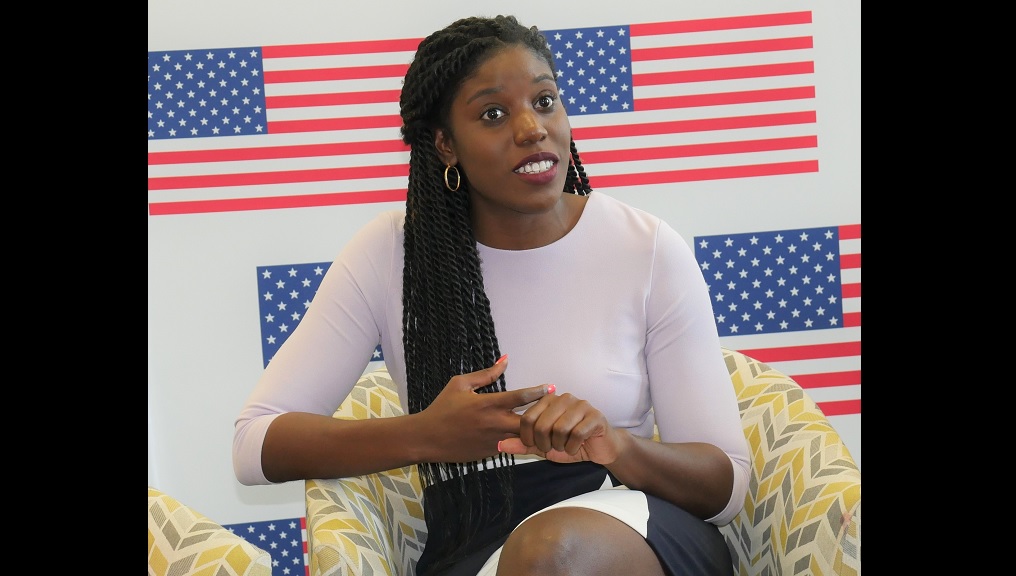 Lianne McNaughton, Founder and Managing Director, Youth Can Do I.T., makes a point during a roundtable discussion at the US Embassy on Thursday, March 5.

More young Jamaican women are gaining the skills and confidence to take their place as leaders and innovators in the field of Information Technology (IT), thanks to a mentoring programme spearheaded by Lianne McNaughton.

The successes of the programmes run by Youth Can Do I.T. (YCDIT), headed by McNaughton, range from high school students starting their own businesses and participants attending an IT conference in California, USA, to young mothers learning to use computers for the first time, leading to much-needed employment.

One of its programmes, which paired young IT professionals with 30 female high school and university students (mentees) to nurture them in the IT field, was funded by a grant of US$20,000 by the United States Embassy in 2018.

“We were really grateful to the US Embassy for providing the funding,” McNaughton said of the Women in IT programme in which the students had monthly meetup sessions which sought to increase confidence and awareness and provide technical, personal and professional skills training for the girls.

“What they really found of value was that there were like-minded individuals that they felt comfortable having conversations with,” McNaughton said.

She was speaking earlier this month at a Women’s History Month media roundtable session hosted by the US Embassy in Kingston which brought together grantees to talk about their experiences.

Of note was that three girls – all still in high school – started their own businesses as a result of them being in the programme. One started a t-shirt company, another a charity organsation, and the third a venture in sustainable development.

Coincidentally, the same three girls were selected to attend the Wonder Women Tech Conference in Long Beach, Califorina where they were exposed to tech giants Google and Facebook among other life altering experiences.

But, despite the achievements of these females, some of them were affected by what is known as the impostor syndrome.

“The impostor syndrome is a feeling of being in disbelief about your own achievements; it’s where you feel like a fraud in your own body,” McNaughton explained about the phenomenon which is apparently common among women in the tech field.

“It was a relief for them to be exposed to others in the field and to give them confidence that they were indeed doing great things.”

Apart from the mentorship project, WCDIT has worked in other areas such as a Women in Tech programme in Rose Town, South St Andrew, which involved a completely different grouping.

“This was an inner city community where people would have seen a programme like this for the first time. These were girls and women aged 14 to 28. The oldest one had three kids and never had a job before,” McNaughton said of the programme sponsored by the Sandals Foundation.

Given the educational level of the females involved, the content for the programme had to be adjusted with focus being placed on simple tasks such as typing and setting up emails – things that most people take for granted.

We had to knock (the course content) down a few levels; first we had to provide access and then exposure to the possibilities of what they could do. We unearthed so many things working with those girls. We had to overcome trust issues and showed them how they could become empowered with technology. It’s not just about building a website or becoming a programmer or coder because, moving forward, every job will require some digital literacy and technical competence,” McNaughton said.

Of note is that the 28-year-old mother of three learned enough to ace her interview and typing test to get a job in a call centre.

“It was the best thing that ever happened to her," McNaughton said proudly.

Despite the successes, McNaughton would like more sponsors to realise the value of her work by coming on board.

“People say its a nice idea but don’t necessarily provide support. The hardest thing is for people to be inspired enough to open up their wallets; because they don’t see the impact immediately, they are not committed to the cause,” she stated.

Broaching conversations on gender violence 'From the Barber Chair'