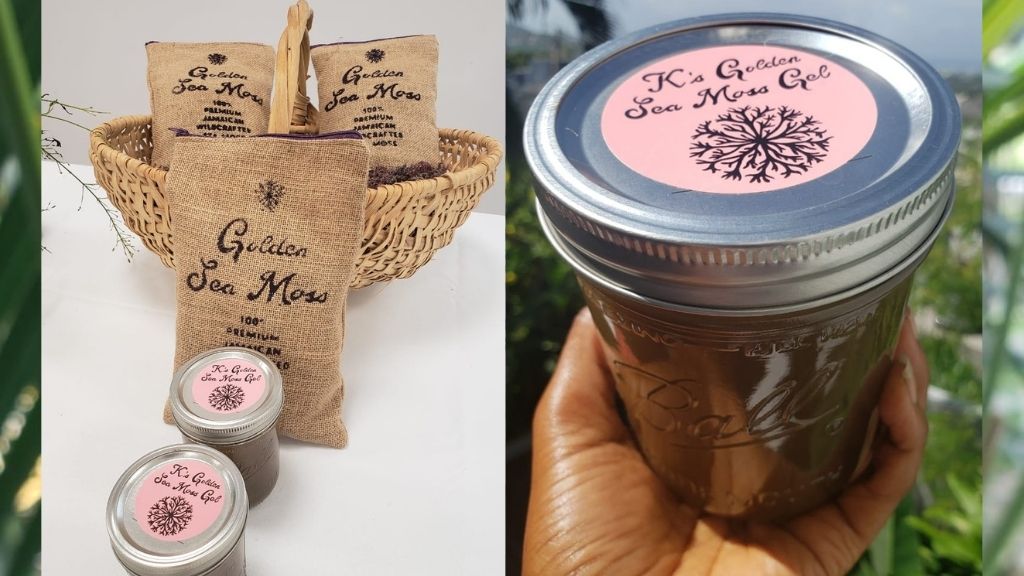 When she’s not vlogging – delving into Jamaican culture and lifestyle – she’s working creatively in the arts or doling out batches of the now in-demand Jamaican wild-crafted Golden Sea Moss gel.

Kareece Lawrence has a hand in more things than we can list. Her Sea Moss gel fell on our radar when she was listed among the ‘femtrepreneurs’ on the Femme Creative line-up (read more about Femme Creative here).

Now, with the current global sea moss obsession, count yourself lucky if you’re able to find it at your nearest supermarket.

The gewy, naturally converted algae is completely organic and packed with all the good stuff —Golden Sea Moss contains 92 of the 102 minerals that the human body requires for daily function.

Lawrence’s K’s Golden Sea Moss is retrieved by divers early in the morning when the sea is smooth and the sun low.

They are washed with spring water from the mountain, dried by the sun, and ‘respectfully sourced with gratitude to nature,’ she shared with Loop Lifestyle.

She has expressed, however, concern for sea moss wild-crafting.

‘I'm concerned because we've seen what tends to be the usual actions of human beings where anything that becomes of value commercially is always subject to over-indulgence and exploitation.’

‘We source our sea moss in partnership with Golden Sea Moss — in an eco-friendly and sustainable way.’

‘We call ourselves 'earth family' because we honour the earth, we love the earth, we understand the importance of the earth and we know how everything in creation is interconnected.’

‘We are not exploiting,’ she continued, ‘and we don't intend to, we pray that the others who carry this medicine will honour it in the same way.’

What keeps the customers coming back is the sea moss is ‘only indigenous to Jamaica and a few places in Asia’.

‘It is not only exclusive, it is very potent and a superfood that is also anti-inflammatory,’ she added.

Now, more than ever, ‘moss crop’ is in high demand, which makes sea moss gel — an immune-builder that has 92 of 102 minerals necessary for the proper functions of the human body — in equally high demand.

Necessity is the mother of invention.

‘The natural flow of my life started a journey with sea moss, and that same flow has led to my making the gel.’

It was inevitable, Lawrence’s natural and organic lifestyle, coupled with a completely vegan diet, led her to use sea moss.

‘I came upon sea moss to provide iron, minerals and reduce inflammation. I incorporated it in my livity immediately, like all great things,’ she said.

‘A friend of mine, Peta Linton from Peta Linton Wellness Catering, who is a nutrition and wellness coach, highly ‘fulldorsed’ me making this commitment and supported my journey by sourcing for me, and sometimes teaching me creative ways to prepare [sea moss].

‘When COVID-19 reached Ja, I became aware that I had to do my best to keep myself and family healthy and with a strong immune system, so I shared my sea moss with them.’

After several requests for the now in-demand sea moss, Lawrence followed all the signs that came her way: the initial gut feeling, support from her ‘support system and tribe’, and a kick from the universe in the form of the Femme Creative expo.

K’s Golden Sea Moss was born. Since the expo, Lawrence has been making gels to supply the demand only from word-of-mouth marketing.

What's with the current sea-moss obsession?

Social media and the easy access to information has taken sea moss to many doorsteps.

Growing awareness is not just in Jamaica, but the world, especially via public figures such as Dr Sebi, Chaka Bars, celebrity rap artistes, and so on.

My time at the Femme Creative pop us was magical from beginning to end.

After an R&R sesh with some sistrens, Lawrence agreed to present at the expo, curated by Debra Edwards and Summer Jarrett.

‘Because of the current obsession with sea moss, many patrons who visited the K’s Golden Sea Moss station either wanted to know more or make a purchase right away’, she told Loop Lifestyle.

On the final day of the three-day trade show, Lawrence sold out and left with several orders for more.

‘All of the ladies were beautyfull, bright, creative, supportive, and very inspiring women. It was amazing to watch everyone organically connect and build the energy in the space… there were zero bad vibes around.’

How does Kareece incorporate sea moss into her diet, you asked?

‘I use it in myriad ways… both ingested and topically. I put it in my tea, water, smoothie, shake, juice, soups, stews, baked items such as puddings, etc.

My friends put it in popsicles for their children; I use it as a facial moisturiser, in face masks/ scrubs, and in my hair as a deep conditioning treatment.

In addition to adding sea moss to your diet right away, she recommends a daily intake of (only 1 – 2 tablespoons is the recommended daily dosage), and use it on your skin.

And the top three products that sea moss can replace are...

2 There’s a sea moss that is cream in colour and has a very shelly texture that can replace rice. I was introduced to it by a friend of mine who’s a nutritionist (Peta Linton Wellness Catering).

3 In the beauty department, sea moss can replace your moisturisers and face masks.

Get the looks from Shenseea’s new Rebel music video