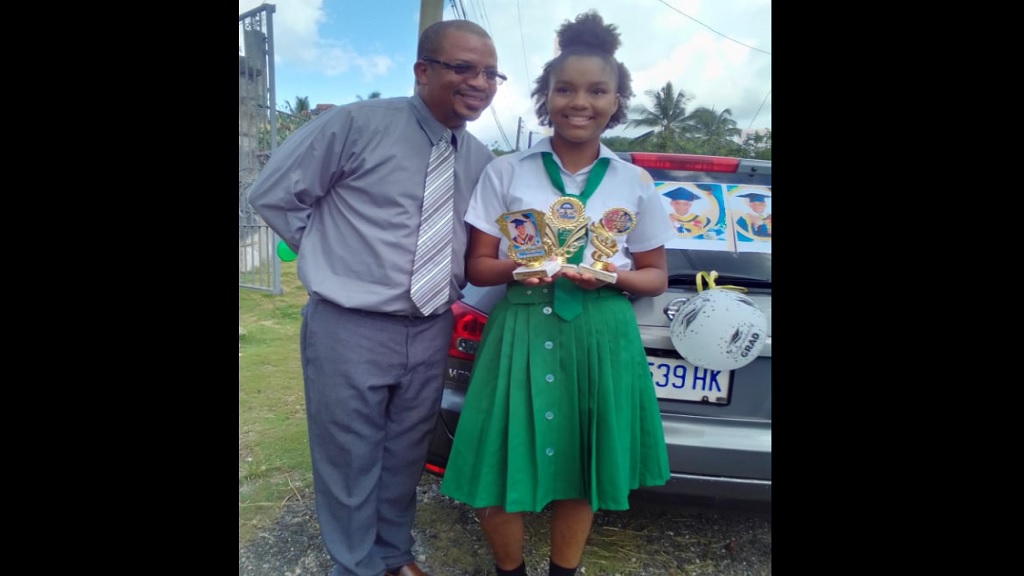 With the COVID-19 pandemic forcing schools across the island to disband traditional graduation ceremonies, Waldensia Primary and Infant School in Sherwood Content, Trelawny opted to host a graduation motorcade for its Primary Exit Profile (PEP) students on Thursday.

Twelve students from the school's infant department who will be moving on to the primary department also participated in the graduation motorcade.

In an interview with Loop News, Principal of the school, Claud Rowe, explained that the staff used their own decorated motor vehicles to drive through the Sherwood Content community, which is also the birthplace of global sprint sensation, Usain Bolt.

"We just could not have sent our students off to another school without giving them some recognition because they were very concerned about what was going to happen," Rowe said.

He said the graduates were visited at their respective homes and presented with their graduation packages.

Of the colourful ceremony motorcade, he said: "So we decorated our cars and drove to each home to stop and hand out their graduation packages, sing, clap and blow whistles for each child," Rowe said, adding that "When we go to each child, the focus is on that child, so all the teachers who are on the motorcade would gather around that child and we take pictures, blow horns and congratulated them."

In relation to the 11 grade six school leavers, they were each presented with certificates, prizes and souvenirs, along with and packaged pictures. PEP sectional prizes were also presented to those students who qualified for the awards.

Rowe described the PEP passes this year at Waldensia Primary as being "pretty good".

The principal elaborated that "The passes this year for PEP were pretty good. I had my top girl for this year, Britney Rowe, and another young lady, Tyricka Gray, who both passed for Westwood High School, which was their first choice."

He noted that the top boy, Denrick Jenkins, was awarded a place at Holmwood Technical High School, which was also his first choice.

The other placements included: another child being sent to Holmwood Technical High School; five students passing for Muschette High; and one child each being sent to Albert Town High and Perth Town High.

According to Rowe, the students welcomed the motorcade-styled graduation.

"They (the students) were very, very excited. Some of my hardcore boys started crying with the attention they got, and the community came out there on the road and clapped us along, cheered us along, some ran behind the vehicles and some joined in with their cars," the Waldensia Primary and Infant School principal outlined.

A special treat for the children at the motorcade graduation was the appearance of their former grade six teacher, Lauren Watson, who the students had not seen since she left the institution at the end of February for a permanent position at a secondary school in St Ann.

During the motorcade through the community, a special prize was presented to former board member of the school, Wellesley Bolt, who is also Usain's father.

"He (the elder Bolt) had been on the school board for many, many years and he has contributed financially and otherwise throughout all those years. As part of the motorcade, we stopped by his house and presented him with a plaque just as a token of our appreciation," Rowe explained.

Meanwhile, he noted too, that after the motorcade, "we (the teachers) put together a thumb drive for the grade six students, with greetings from several officials, and videos and pictures of the motorcade, so that they have that as souvenirs."

The principal expressed gratitude to the Parent/Teachers’ Association (PTA) and the entire staff of Waldensia Primary and Infant School, who he said all contributed to the successful staging of the innovative graduation ceremony.

The success of the first-time motorcade graduation by the school has led prospective grade six students and their parents to be insisting that a similar format should be held next year.

Rowe said: "We have students who graduated last year saying we cheated them because they didn't get a motorcade, and those who are in grade five and even the parents are adamant that they don't want the traditional graduations."

While noting that sections of the PEP exams were cancelled because of the COVID-19 challenges, Rowe said classes for the grade six students continued through online platforms.

He elaborated that "Even though they (the students) weren't going to sit the (PEP) exams, we had classes going for the entire period with maximum participation. We used mainly WhatsApp as a means because most of my parents are hotel workers, so we thought that WhatsApp would be the most effective way. So they were engaged throughout the period even though they knew they weren't going to do an exam per se."

The principal explained as well, that care packages and mobile data plans were provided to students who were in need of the assistance.

"What we did as a school though, through my family abroad I was able to do care packages throughout the period for my most needy students, and a couple of other persons chipped in to assist us in terms of getting food packages out. So we helped with food and mobile data throughout the period," he indicated.

Proud moment for senior cop as daughter graduates with honours

80% of PEP students placed in high schools of choice