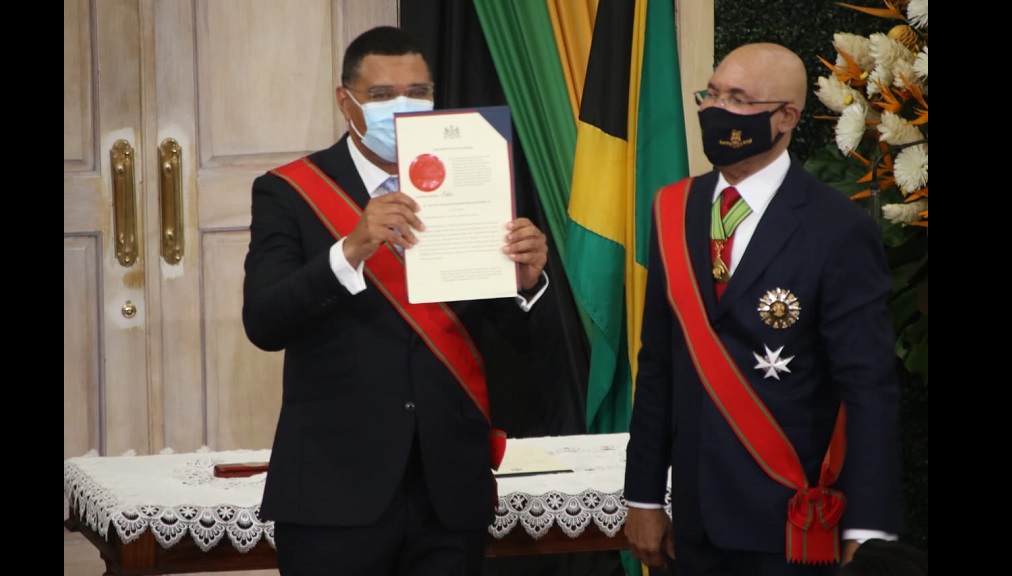 Prime Minister Andrew Holness displays the Instrument of Appointment to the Office of Prime Minister after being sworn in on Monday. Governor General Sir Patrick Allen looks on.

Jamaica Labour Party (JLP) Leader Andrew Holness has been sworn in as prime minister for a third time.

He was sworn in by Governor General Sir Patrick Allen at a ceremony at King's House on Monday.

Holness last week led the Jamaica Labour Party to a 48-15 landslide victory over the People's National Party in the island's 18th general election since Universal Adult Suffrage in 1944.

The swearing-in ceremony was restricted to 32 people inside the banquet hall of King's House due to COVID-19.

Among the major issues in his inauguration speech, Holness said his administration would be targeting the creation of 150,000 jobs, looking to address chronic water problems in a number of parishes, rolling out major infrastructural developments and moving aggressively to stamp out corruption.

He was again sworn in as prime minister on March 3, 2016 after he led the JLP to a one-seat victory over the then Portia Simpson Miller-led PNP on February 25 that year. On that occasion, the JLP won 32 seats to 31 for the PNP for the closet general election in Jamaica's history.