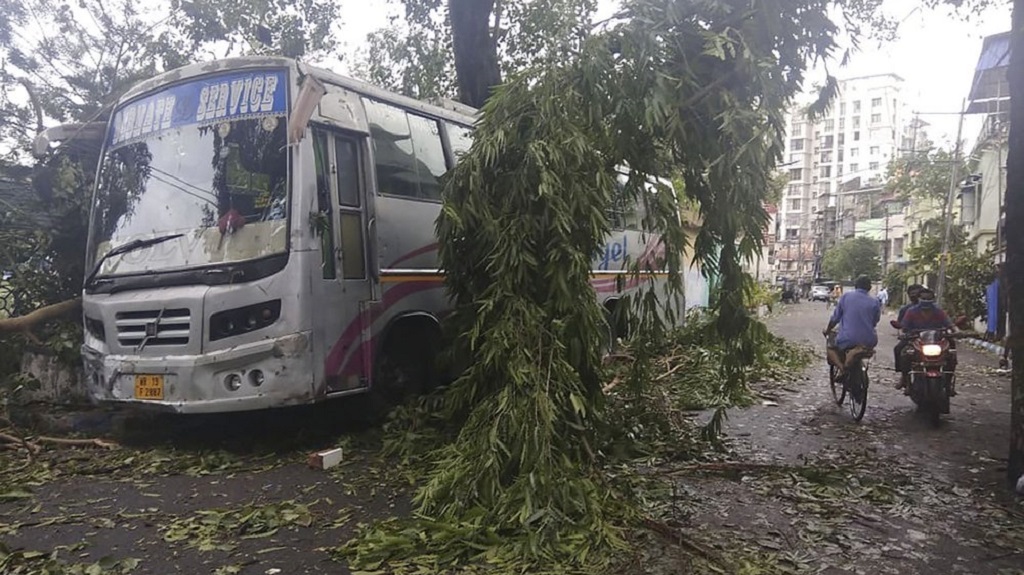 Commuters move past a tree branch precariously hanging after cyclone Amphan hit the region, in Kolkata, India, Thursday, May 21, 2020. A powerful cyclone that slammed into coastal India and Bangladesh has left damage difficult to assess Thursday. (AP Photo/Bikas Das)

Wide swathes of the coasts of India and Bangladesh were flooded and millions of people remained without power Thursday, after the most powerful cyclone to hit the region in more than a decade left dozens dead and a trail of destruction.

In the Indian city of Kolkata, home to more than 14 million people, large portions of the metropolis and its suburbs were underwater, including the city's main airport. Roads were littered with uprooted trees and lamp posts and electricity and communication lines were down.

Cyclone Amphan also badly damaged many centuries-old buildings when it tore through the city on Wednesday.

"It feels like a dystopian Jurassic Park of sorts," said Shuli Ghosh, who runs a cafe in Kolkata. "The roofs of many homes have flown away and the streets are waterlogged."

When the storm made landfall on Wednesday it lashed coastal areas in both India and Bangladesh with heavy rain, a battering storm surge and sustained winds of 170 kilometres per hour (105 mph) and gusts up to 190 kph (118 mph).

It devastated coastal villages in both countries, knocking down mud houses, ripping out electricity poles and uprooting trees.

Hundreds of villages in Bangladesh were flooded by tidal surges and more than a million people were without electricity.

Officials in both countries said the full extent of the damage remained to be seen as communication lines to many places remained down.

India's prime minister, Narendra Modi, said authorities were working on the ground to ensure all possible assistance to the those affected.

"No stone will be left unturned in helping the affected," Modi tweeted on Thursday.

The ongoing coronavirus pandemic and social-distancing measures had made mass evacuations ahead of the storm difficult. Shelters were unable to run at full capacity in many places and some people were too scared of the risk of infection to mass there.

Likewise the pandemic will have and impact on relief efforts and the recovery. The damage caused by the storm is likely to have lasting repercussions for poor families already stretched to the limit by the economic impact of the pandemic.

In India's Odisha state, the cyclone destroyed crops of Betel, a leaf used as a wrapper for chewing areca nut or tobacco. In Bangladesh's southwestern district of Bagerhat, more than 500 fish farms were flooded.

Debashish Shyamal, who lives in a fishing village along the coast of West Bengal took shelter with his family in a government clinic. He said the wind blew open the windows and doors and for hours they sat huddled inside, drenched by the torrential rain.

On Thursday, he woke up to dangling electricity wires, waterlogged streets and an entirely uprooted forest next to his village.

"There is nothing left," he said.