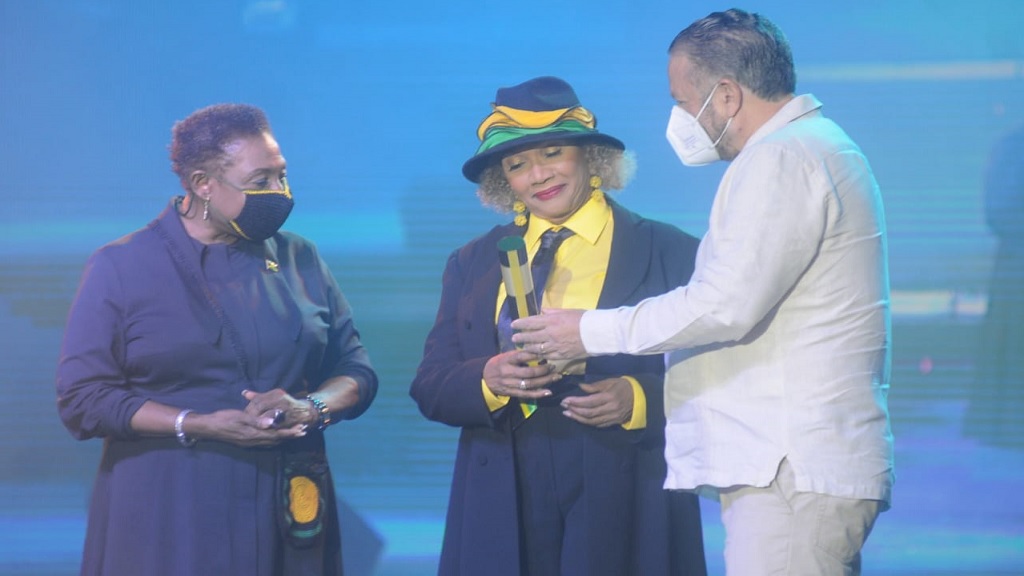 'Queen of Reggae' Marcia Griffiths (centre) being honoured for her contribution to Jamaican music at the Jamaica 58 Independence Spectacular on Thursday. Culture Minister Olivia Grange and Government Senator Tom Tavares Finson share in the occasion.

Jamaica's rich culture was on display for two hours at the National Arena on Thursday with the staging of the Jamaica 58 Independence Spectacular for a virtual audience.

Under the theme, 'Wheel And Come Again', it was a spectacular affair featuring a mixture of musical and dance performances, and also the honouring of three entertainment stalwarts - Ken Boothe, Marcia Griffiths and Shaggy.

Gospel artiste Kukudoo blessed the event with the opening performance before an ensemble took viewers on a historical journey with Jamaican dance moves of the 1960s. Oliver Samuels and Karriott narrated the dancing.

Ken Boothe was then recognised with a plaque presented to him by Culture Minister Olivia Grange before he performed his hits 'The Train Is Coming', 'I'm Gonna Tell You Goodbye' and 'When I Fall In Love'. 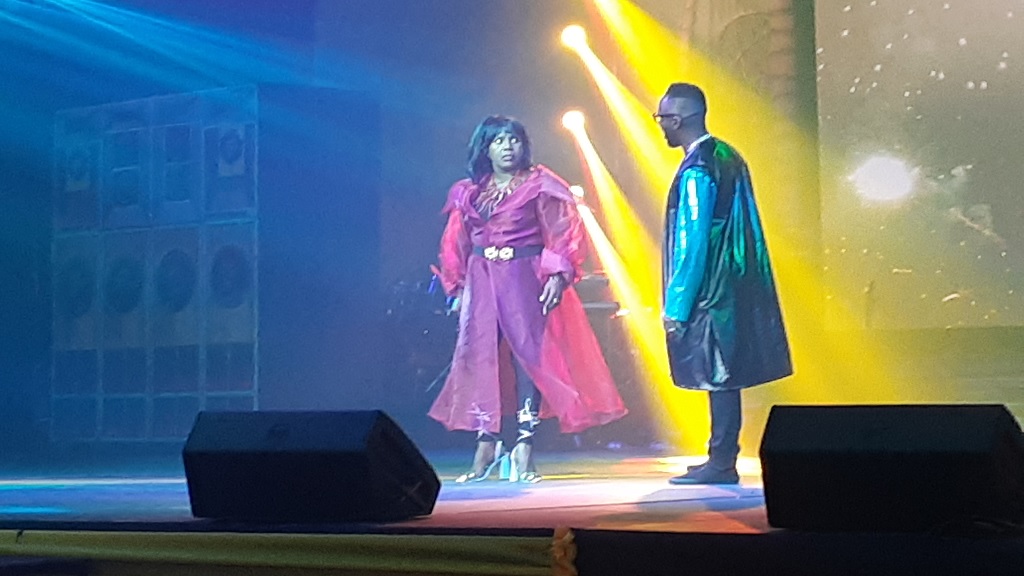 Marcia Griffiths was honoured following the performance of the dance moves of the 1970s, which were narrated by 'Ity' Ellis and Deon Silvera. The 'Queen of Reggae' then delivered 'I Shall Sing', 'Dreamland' and 'Electric Boogie' in a performance that had fellow artiste Tessanne Chin on her feet rocking.

Samuels and Harriott introduced the moves of the 1980s while giving ample descriptions of the estimated $800 million damages done by Hurricane Gilbert in 1988 before making way on the stage for Grange to pay tribute to Shaggy with a plaque.

Dancehall music of the 1990s were highlighted in another dance section, after Silvera and Ellis recalled Lisa Hanna being crowned Miss World in 1993 and Carlene ruling as 'Dancehall Queen'. 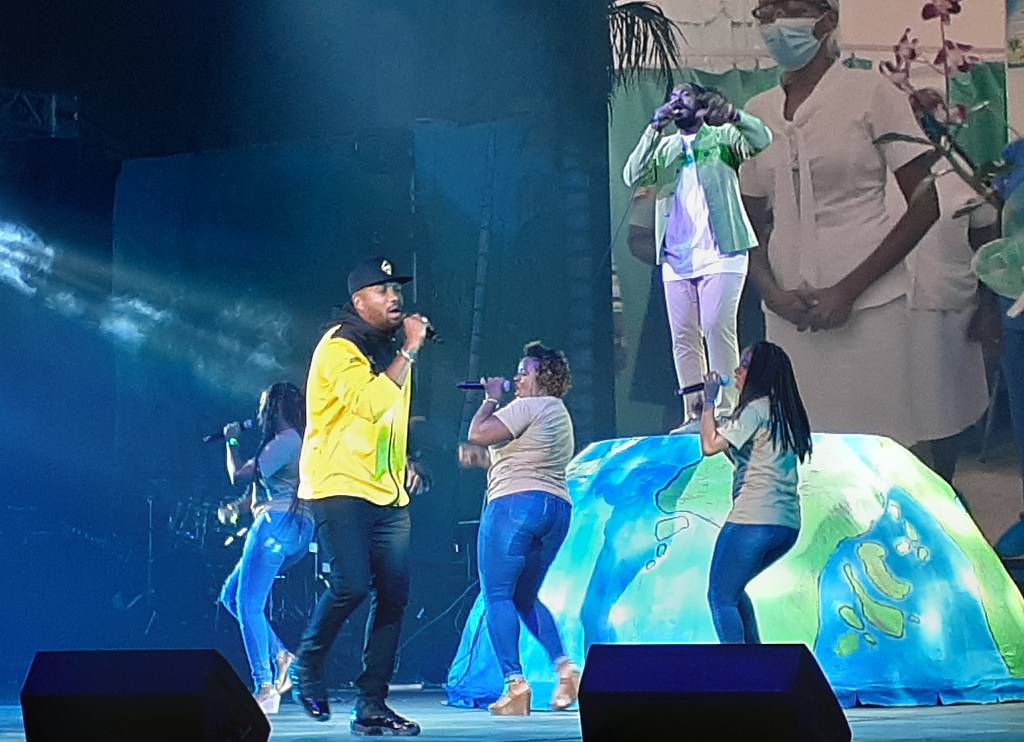 Chevaughn and Agent Sasco did 'Quiet Giantz' in the organisers' effort to show appreciation for the island's security forces and the work they are doing during COVID-19.

Richie Stephens opened with 'Winner' before 'Trying To Get To You' and his duet with the late Garnet Silk, 'Fight Back'.

Jimmy Cliff's 'Many Rivers' was done eloquently by Tessanne Chin before she performed a cover of reggae legend Bob Marley's 'Redemption Song'.

Christopher Martin paid tribute to his 'Mama' before his version of 'Little Green Apples' and a song about summer body. 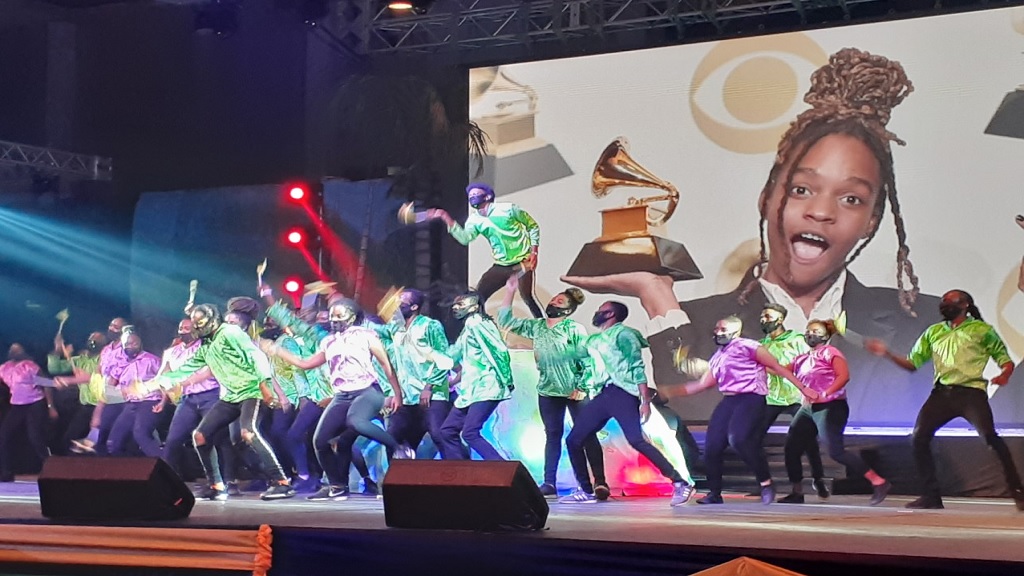 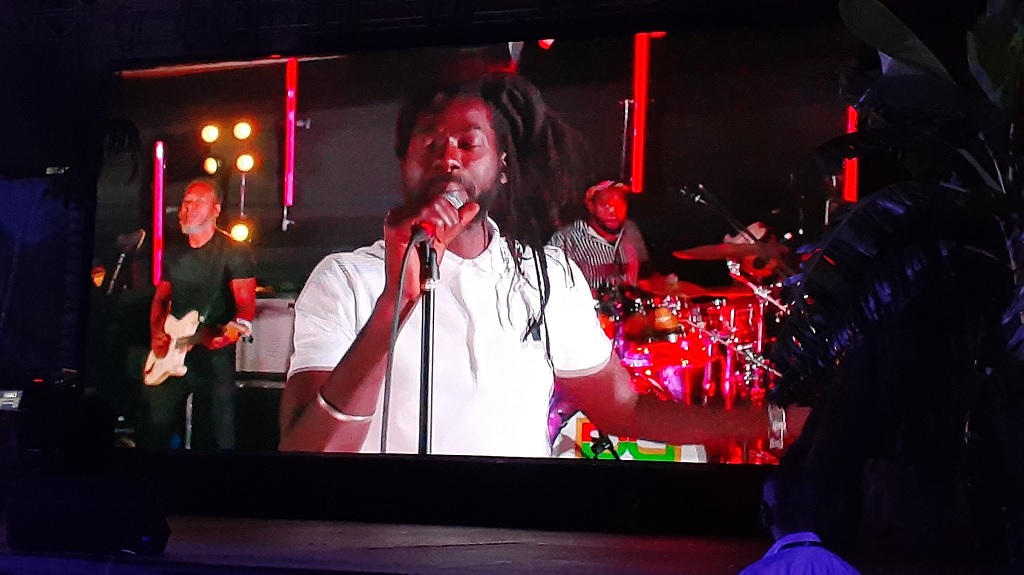 Koffee was celebrated with a dance as her mega hit 'Toast' played in the background. It was in recognition of her Grammy Awards win earlier this year, which makes her the first female and youngest person to win the Reggae Grammy award.

Buju Banton, this year's Festival Song winner with 'I Am A Jamaican' performed along with his band and backup singers from his studio. After performing the winning song, Banton delivered 'Buried Alive'

Like the show started, likewise it closed with gospel as Kevin Downswell asked the Father to 'Carry Me'. He was then joined by Tessanne, Richie, Beenie Man and other artistes for 'You Make Me Stronger'.

The annual Independence Grand Gala, which normally takes place at the National Stadium with a capacity crowd, was cancelled this year due to COVID-19.