A view from the outside: Kudos to Detective Corporal Adrian Lewis 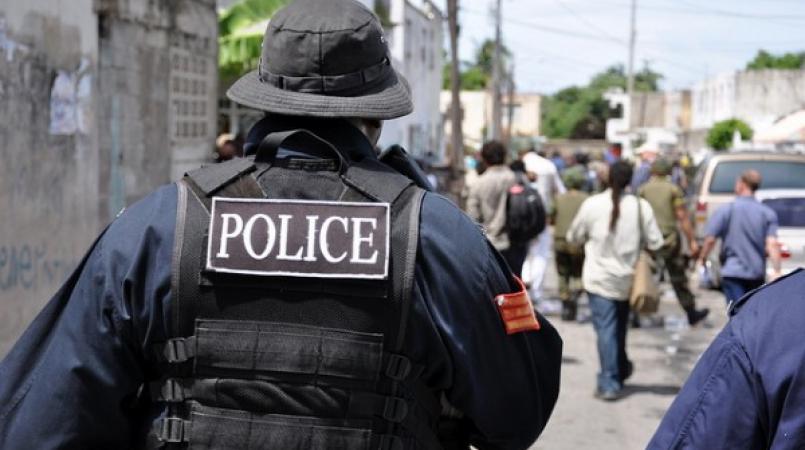 File photo of the back of a local police officer.

At a time when the police are coming under serious flak for a plethora of blunders, criminality, corruption and everything that the public loves to hate them for, there has come to light the diligent work of one cop, who has displayed that following the rules and hard work pays off.

He is detective Corporal Adrian Lewis of the Constant Spring Police Station. Lewis came in for a heap of praise from Director of Public Prosecutions, Paula Llewellyn, who recently lauded him for leading a probe and securing an airtight case against three suspects who pleaded guilty to murder even though the prosecution only had circumstantial evidence.

There were no bodies found in the particular case.

The convicted murderers, Damian Lawrence, Dionne Mitchell and Evon Simmonds participated in the robbery and abduction of businessman Curtis Martin and university student Mario Daley in October 2013 at East Kirkland Heights in St Andrew. The men were held at gunpoint and after items were stolen from the home, the men were placed in a motor vehicle and taken away and killed. They have not been seen or heard from since.

The three suspects were arrested, charged and convicted for illegal possession of firearm, ammunition and robbery but not for the more serious crime of murder. But after prompting from Llewellyn, the police diligently prepared a case against the three and the evidence was so solid that they had no choice but to cop guilty pleas.

This is a bright day for law enforcement in Jamaica. Law abiding citizens must congratulate Lewis for his work as it means three of those among us who are bent on creating mayhem and committing murder for personal gain will be sent away to the place they should spend the rest of their lives.

Too often in Jamaica, criminals snub their noses at us after committing heinous and heartless crimes due to the fact that the state cannot come up with an airtight case against them. They then are released back into the public sphere to commit more crimes and leave other relatives to grieve after they spill innocent blood.

My only fear is that they entered into a plea bargain arrangement and will be given reduced sentences for their crimes. That would defeat the purpose of Corporal Lewis’ hard work.

Llewellyn is absolutely correct. The police must try harder to ensure that, when a suspect is held and the evidence points in the direction of them being guilty, that they plug all the leaks and make life hard for a wily attorney who, in doing their job, will try to find every loophole to ensure their client gets off.

The burden of proof lies on the shoulders of the prosecution. They must prove a defendant guilty beyond a reasonable doubt. A suspect is innocent until proven guilty and to prove guilt takes hard, dedicated work from investigators.

We need more bright sparks like Detective Corporal Lewis to reassure us that we have hope to see justice done and meted out to the vermin among us.

Too often the police produce shoddy work similar to a case in the lower court that I personally witnessed while in Jamaica last week.

This was a simple case of assault. A fight broke out between two vendors who sell in manor Park. The skirmish erupted after one vendor accused the other of stealing $5,000 off his stall. The accused was injured and made a report to the Constant Spring Police – the same station where Lewis works.

The Investigating officer in the case told the court that the complainant was bloodied in the face when he went to make the report at the police station. When asked by the presiding judge if he had included that in his statement, the cop looked befuddled and replied:

That kind of piecemeal response is unacceptable from a police officer.

How could he not know what he had compiled in his statement?

These are the actions which help to place the police further behind the eight ball of public opinion that they are incompetent.

The police have been placed in a precarious position in Jamaican society. Their ranks are filled with the sons and daughters of ordinary Jamaicans and while some are corrupt and may have joined the ranks of the constabulary in order to further their criminal desires, many honestly want to make a difference.

Not all cops are corrupt or lazy. For many, policing is a career and they are pursuing their dream of serving their country, protecting and reassuring the public under dire strain.

I recently visited the Grants Pen Police Station - which is one of the most modern such facilities in Jamaica - only to hear an officer telling a woman who needed assistance that there was only one vehicle assigned to that station and that she would have to wait until it was available to get assistance.

If that is the case at the Grants Pen Police Station, then what obtains elsewhere?

The law abiding citizens of Jamaica need the police. Like them or not, the police are the first responders.

Similarly, the police need the support of Jamaicans.

The constabulary is far from perfect but they are a reflection of us as a society - imperfect, corrupt and flawed.

Again, kudos to Detective Corporal Lewis. Here’s hoping your colleagues will follow suit after being inspired by the positive light that your work has put the constabulary in, if even for a fleeting moment.

A view from the outside: Meddling 'in laws'

A view from the outside: Shame and scandal in the family