VIDEO: Why men should limit alcohol to a drink a day 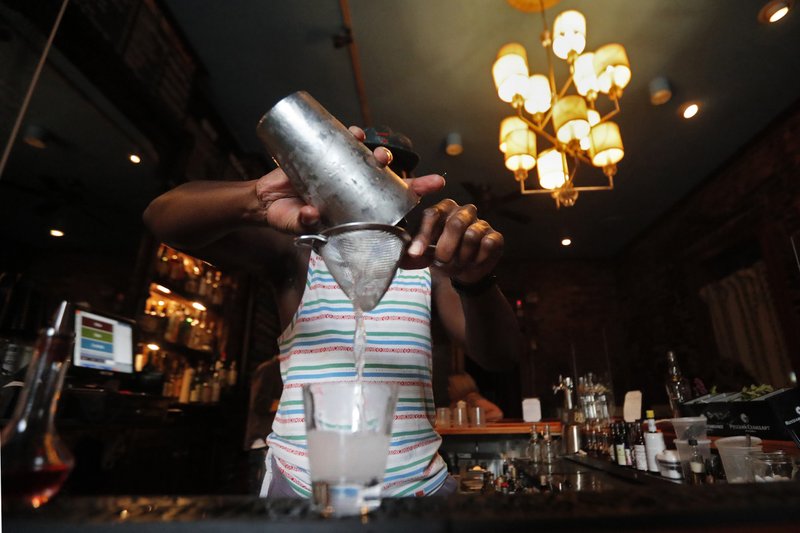 A bartender makes a cocktail in New Orleans. Reports finds if you decide to have an alcoholic drink, limiting yourself to one a day is best — whether you’re a man or woman. (AP Photo/Gerald Herbert)

If you decide to have an alcoholic drink, limiting yourself to one a day is best — whether you’re a man or woman.

That advice has been in place since 1990.

In a report released Wednesday, a committee of experts noted there isn’t adequate evidence to support different alcohol recommendations for men and women, and that research supports tightening the limit for men.

‘As a nation, our collective health would be better if people generally drank less’ said Dr Timothy Naimi, an alcohol researcher at Boston University, and one of the experts on the committee convened by federal officials.

The proposed advice shouldn’t be interpreted to mean that not having a drink on Thursday means you can have two on Friday, Naimi said.

One drink is the equivalent of about one 12-ounce can of beer, a five-ounce glass of wine or a shot of liquor.

The advice is based on links that researchers observed between drinking habits and all causes of death, including heart disease, cancer and car accidents, rather than a specific physical harm that alcohol might have.

Such observational studies, common in food and nutrition science, do not establish a cause-and-effect relationship but they are often the best evidence available, so experts use them to give guidance.

With alcohol, Naimi said two drinks a day was associated with an increased risk of death compared with one drink a day.

He said the increase was modest, but notable enough for the committee to recommend updating the advice.

Whether the proposed new advice would influence behaviour isn’t clear.

Still, he said most people could generally benefit from any reduction in alcohol, even if they’re not within the advised limits.

The report noted that the guidelines may be aspirational, but are important for ‘stimulating thought around behaviour change.’

The guidelines are based on the overall health of a population, and an individual’s risk from drinking could vary depending on a variety of factors and health habits, said Tufts University Professor of Nutrition Dr Dariush Mozaffarian.

Mozaffarian also noted that many people misinterpret the current advice to mean they should have one or two drinks a day.

The limits are meant for people who already drink.

The guidelines do not recommend that people who do not drink alcohol to start doing so.

Even if most Americans aren’t familiar with the details of the US Dietary Guidelines, they’re subject of intense lobbying because of their power to shape the advice dispensed by doctors and what’s served in federal food programs, including school lunches.

Other changes recommended by the committee include tightening the limit on added sugars to less than six percent of calories, down from the previous limit of 10%.

Federal officials are expected to issue the updated guidelines by the end of the year, after considering public comments and input from other agencies.

Man drops out of college due to drinking, graduates 29 years later