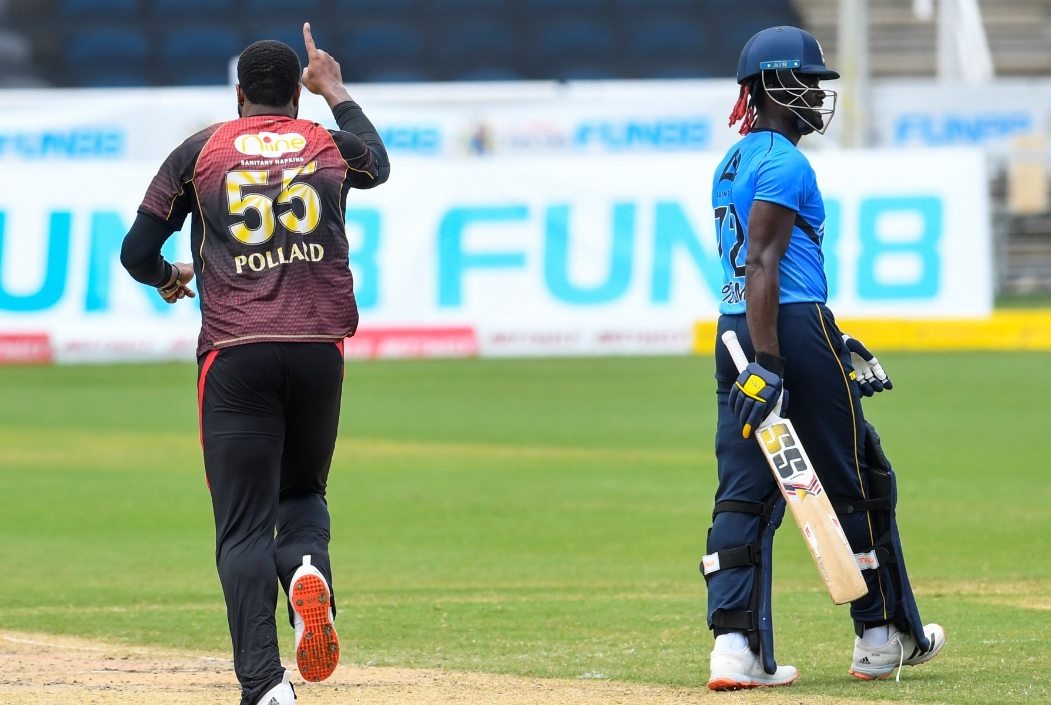 Trinbago Knight Riders maintained their unbeaten run in the 2020 Caribbean Premier League (CPL) with a 23-run victory over the St Lucia Zouks, at the Brian Lara Stadium in Tarouba, Trinidad and Tobago,  on Saturday.

Captain Kieron Pollard led the Knight Riders to victory with good performances with both bat and ball.

Pollard hammered 42 from 21 balls as the Knight Riders, sent in to bat, made 175 for five off their allotted 20 overs. The captain returned to pick up three wickets for 35 runs from his four overs to restrict the Zouks to 152 for seven.

The game meant almost nothing to the Knight Riders - their place atop the table already guaranteed - but a ninth straight win was yet another iteration of their dominance.

Zouks, which are third on the table with 10 points, have already made it to the semi-finals also, but a defeat of this magnitude has dented their chances of finishing second, ahead of Guyana Amazon Warriors who are on 12 points. Zouks have one more match - against Jamaica Tallawahs. If they win that by a big margin, there is still a chance they could finish second, on net run-rate.

It was another death-hitting masterclass from Pollard, well-supported by Darren Bravo, as the two experienced batsmen helped to guide the Trinbago Knight Riders to their third 170+ score in a row.

Darren’s elder brother Dwayne Bravo combined with his captain to follow an excellent powerplay bowling performance and keep the St Lucia Zouks at arm’s length throughout the chase.

Sunil Narine was rested again, and openers Lendl Simmons and Tion Webster started slowly, with a pull for six off Scott Kuggeleijn the only boundary Simmons managed before bottom-edging to the keeper and was caught for eight.

Mohammad Nabi’s second over was expensive, Webster powering him for a six over extra-cover in an over that went for 13.

Kesrick Williams followed a no-ball with a free hit which Tim Seifert powered for six. Seifert, batting at three because of Colin Munro’s hand fracture, followed up with the first four of the innings, then showed off his reverse and orthodox sweep off the returning Roston Chase. Thus the Knight Riders reached 47 for one off the powerplay.

Webster cleared the long-on fence off Zahir Khan, but the Afghan got his revenge with a quicker ball to end a good cameo. Webster made 20 from 14 balls.

Chase gave away five wides in an over that went for 10, but Zahir kept things tight going for just five and Mark Deyal closed the first half of the inning with an over of four. At the halfway stage, the Knight Riders were 74 for two.

Darren Bravo launched a six over Zahir’s head. Deyal was accurate again, and Zouks captain Daren Sammy brought himself on to bowl for the first time in the competition and marked the occasion with a wicket as Seifert sliced to Najibullah Zadran at deep point and was caught for 33 from off 30 balls.  Pollard, back captaining after a rest, came to the middle with the Knight Riders 94 for three after 13.

Nabi returned to go for just one, but Williams was again loose, going for 13 including six wides. Sammy gave himself a second over, but he too went for 13 thanks to Pollard top-edging a four then lofting a six over extra-cover. With four overs to go, the Knight Riders were 121 for three.

Good running and a Pollard edge meant Kuggeleijn’s third over went for 11, but Pollard’s six over extra-cover off Williams came squarely out of the middle, as did Darren Bravo’s over long-on. Eighteen runs came off the 18th over, and in the 19th over, Pollard smashed Kuggeleijn for a four and a six. The Knight Riders captain did however lose his wicket, swinging so hard the bat flew to square leg even as he edged behind. Pollard hit three four and three sixes in his 42.

Dwayne Bravo hit his first ball for four to end an expensive Kuggeleijn's over, and Darren Bravo hammered Williams for a six over long-on. Darren Bravo lost his wicket off the last ball of the innings, but with the Knight Riders managing 80 for two off the last 36 balls, the damage was done.

With Rakheem Cornwall rested, Kimani Melius and Deyal got a chance at the top of the order but only managed 13 off the first four overs, Akeal Hosein and Sikandar Raza proving hard to hit. While Khary Pierre conceded a boundary to each opener, Melius gloved a Dwayne Bravo slower ball down the leg-side where Seifert took a good diving catch to dismiss the batsman for 12.  The Zouks, chasing a victory target of 176, managed just 26 for one off the powerplay

Andre Fletcher hit the innings’ first six off Fawad Ahmed, who also conceded a four to Deyal, but Raza and Dwayne Bravo kept things tight. When a shower briefly interrupted proceedings in the 10th over the Zouks were 63 for one and needed almost 11 an over.

Hosein returned but went for 10, and Fletcher meted out some Pollard-like treatment to the Knight Riders’ captain’s first ball. Deyal though didn’t make such a good connection and was caught at long-on for 40 off 33  balls, Seales somehow hanging on despite Dwayne Bravo colliding with him.

Dwayne Bravo returned, but Nabi sent him over the midwicket boundary. Fletcher and Nabi inexplicably found themselves running to the same end, but the throw missed the stumps. Fletcher again started a Pollard over with a leg-side six, but Pollard got his revenge as Fletcher picked out Webster at deep midwicket and was caught for 42 off 27 balls. After 14 overs, the Zouks were 104 for three and needed 12 an over.

Hosein finished with a boundary-less over, and though Nabi muscled Pollard over his head for a six he fell for 17 attempting another, Dwayne Bravo holding on to a skier off the toe-end. Dwayne Bravo turned wicket-taker himself to dismiss Nabi’s countryman Najibullah Zadran who dragged a sweep onto the stumps and was bowled for 12.  After 17 overs, the Zouks were down to Sammy and Kuggeleijn and needed 15 an over.

Just 12 runs, none in boundaries, came off Pollard or Dwayne Bravo’s final overs, and though in the 20th Jayden Seales started badly by conceding a six to Sammy and a wide, he responded with a good straight ball, which Sammy hit high rather than long, his opposite number Pollard taking the catch despite Darren Bravo running too close for comfort to him. Sammy went for 14.

Dwayne Bravo got a catch of his own, Kuggeleijn, on nine, picking him out to give Seales a second, and in truth, this was the Knight Riders’ game from some way out, as even without Narine, Munro and the still-hamstrung Ali Khan they had far too much for the Zouks.

WATCH: Tridents slump to 27 for 8 in crushing defeat against Warriors