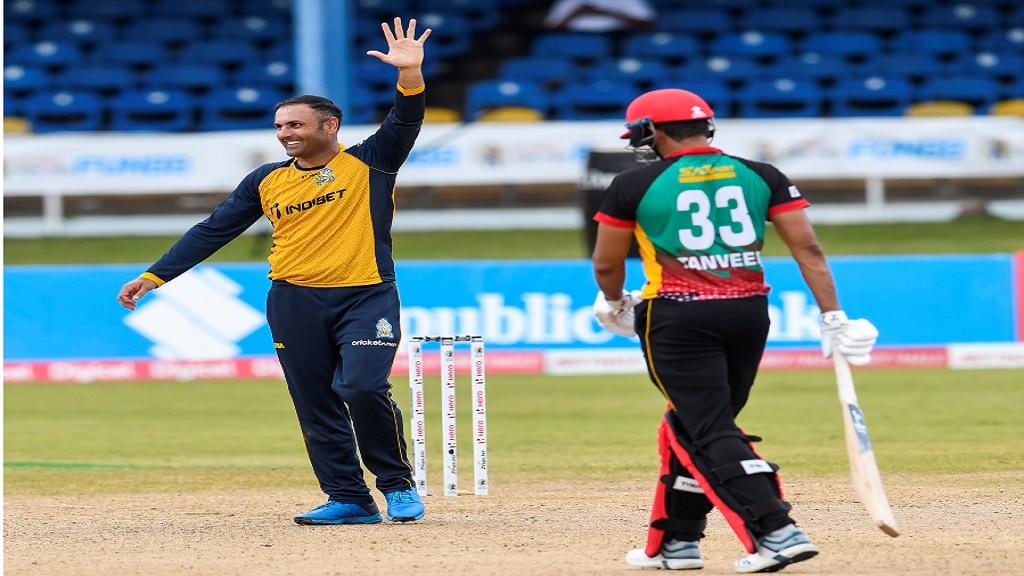 It was St Lucia Zouks fourth win in six matches.

The Zouks won the toss and chose to bowl,  and Nabi set the tone straightaway with two wickets in the first over of the match. The Patriots never recover and were restricted to 110 for nine. Zouks reached the target off 14.4 overs for the lost of four wicket.

Nabi’s career-best figures (five for 15 from four overs), the third-best in CPL history, led a spin demolition of the St Kitts & Nevis Patriots. He was well supported by Rakheem Cornwall and Zahir Khan.  Cornwall followed up with a brief but brilliant assault that took any remaining tension out of the chase for the St Lucia Zouks.

After Zouks’ captain Daren Sammy put them in, the Patriots had yet to score when Nabi dismissed both Chris Lynn and Nick Kelly. Lynn continued his run of being dismissed by spinners, pushing a simple catch back to the bowler, and Kelly edged to the safe hands of Cornwall at slip.

Nabi soon made it four. Denesh Ramdin sought to follow a six over long-on with one over square leg but top-edged to Najibullah Zadran and was dismissed for nine. The next ball Patriots leading scorer of CPL 2020, Evin Lewis, on one, spooned a sweep to Roston Chase at square leg to leave the Patriots 11 for four off just three overs and Nabi on a hat-trick.

Chase’s introduction with the ball was not a surprise, and he went for just three off his first over. Jahmar Hamilton just about survived the hat-trick ball, but he and Ben Dunk managed no further boundaries as the Patriots reached the powerplay at 22 for four.

Another tight over came and went, this time from Zahir Khan. Dunk finally broke the drought as Chase overpitched, sending the off-spinner high over the sightscreen. Oddly, after eight overs the Patriots had hit two sixes but no fours.

That block-block-slog approach brought Jahmar Hamilton’s downfall, as he prodded at a Zahir googly and edged behind. Hamilton made nine.  Cornwall closed out the first half of the innings well, and at drinks the Patriots were 43 for five with a lot resting on Dunk once more.

Dunk hit Zahir straight for a third six, but should have been stumped in the same over. After 13 overs, Dunk had 32 of the Patriots’ 59 for five, and the pressure on him finally told as Cornwall’s extra bounce saw the Australian splice a pull to deep midwicket and was caught for 33 off 37 balls.

Even a Mark Deyal full toss didn’t result in the match’s first four. After 15 overs the Patriots were 66 for six, and it got worse as Nabi returned to complete his five-for - remarkably, the first of his 10 year and 264 game T20 career - as Tanvir scooped a sweep to Zahir at short fine-leg and was caught for 12.

Kesrick Williams came on for the 18th, off which captain Rayad Emrit took for 14 including, at long last, a four. Captain Rayad Emrit fell next over for a run-a-ball 16,  Deyal taking a running catch at long-on, but Scott Kuggeleijn dropped short off his last ball and Alzarri Joseph sent him into the stands. Imran Khan sacrificed himself to get Joseph on strike, and the Antiguan responded with a second six. Thirty-seven off the last three overs, all bowled by seam, only delayed the inevitable.

The Patriots surprisingly started with seamer Tanvir, who Cornwall hammered for two fours and two towering sixes. Emrit gave Jon-Russ Jaggesar an aggressive field, but Jaggesar’s first ball was poor and Andre Fletcher cut it easily for four. Cornwall smashed Imran clean over the roof, and while he was bowled two balls later for 26, the fact that he alone hit more fours and almost as many boundaries than the entire Patriots team told the story.

After a brief shower, the Zouks resumed needing just 81 at well under five runs an over.  Emrit took a good catch to leave Imran on a hat-trick, which the ever-calm Chase denied him comfortably.

With Cornwall having taken the pressure off, the Zouks found strike rotation easy, and that relaxed feel gave Fletcher confidence to smash Jaggesar into the top of the Carib stand to end the powerplay at 47 for two. The opener’s dismissal was a surprise when it came with a pull straight to midwicket, giving Imran a third wicket. Fletcher made 16.

Najibullah Zadran reverse-swept two fours and good running meant Imran’s last over went for seven. Emrit brought himself on, but Chase and Najibullah took him for a boundary apiece, and the Zouks cruised to 79 for three at the halfway stage.

A desperate Emrit turned to Dunk’s part-time off-spin - so part-time Dunk bowled in his sunhat - which Najibullah smashed for four as the over went for eight. Najibullah dished out further punishment in Dunk’s next over, lifting him for a six over long-off, but Dunk got a small measure of joy as the Afghan top-edged to deep midwicket and was caught for 33.

It was Dunk’s first CPL wicket, just the third of his T20 career, but it was scant consolation as the Zouks sealed victory with 32 balls to spare without even needing Nabi to bat.