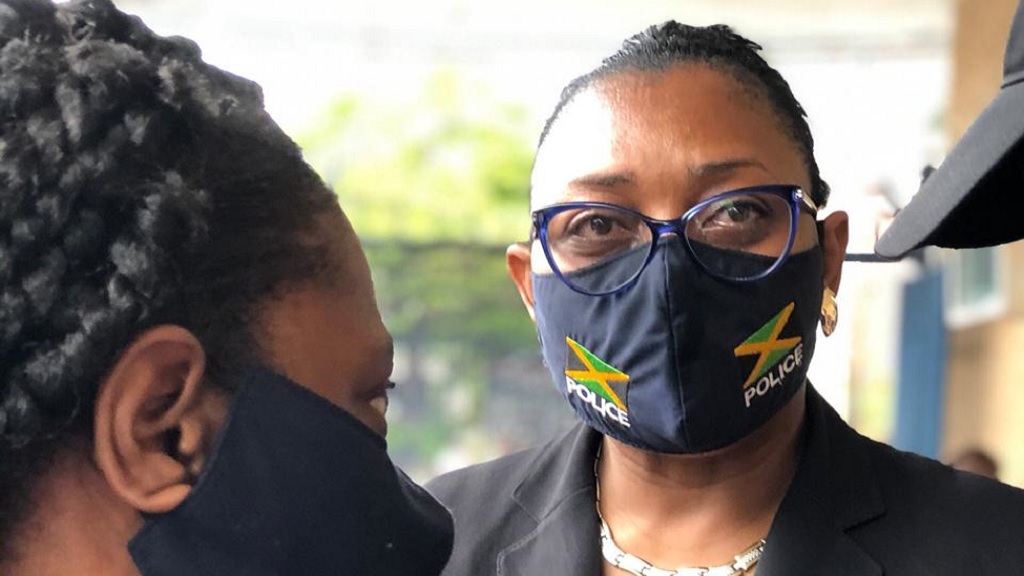 A teary-eyed Senior superintendent Stephanie Lindsay, head of the Constabulary Communication Unit, outside the Kingston Public Hospital on Tuesday following the death of superintendent Leon Clunis.

The children of superintendent Leon Clunis were at home hanging decorations for a 'Welcome Home' party in honour of their crime-fighting dad's discharge from the hospital when they got the sombre news that he had suddenly passed away.

"This was not the news we were expecting, his family, his wife came to collect him, along with his colleagues when we got the news. This one has hit us very hard because we weren't expecting it based on how  well he was doing medically. We just have to continue to support his family, this is very difficult for his wife and children," Senior superintendent Stephanie Lindsay, head of the Constabulary Communication Unit, told journalists outside the Kingston Public Hospital on Tuesday evening.

"The wife was here (at the hospital) to get him, the children were at home preparing a welcome home for him, it was not to be," she added.

The news shocked and saddened Jamaicans who had rallied around the family, and the Jamaica Constabulary Force in wake of the June 12th shooting incident on the outskirts of Spanish Town that had claimed the lives of two cops and injured two others including Clunis. Despite being shot over eight times, Superintendent Clunis held on for 18 days and appeared to be making significant strides before he encountered unforeseen complications.

She said: "We got the call, we are all shocked, we are all saddened, up to minutes before that, he was in high spirits, his recovery was going well, he was being prepared to be discharged from the hospital, they were awaiting medication for him to leave when he suddenly developed complications, and the medical team wasn't able to revive him, and he passed on."

SSP Lindsay said that the JCF remains resolute in its battle against criminal elements, despite the heavy casualties sustained as a result of one incident.

"We are treating with it, the best way we can...when we lose a member from the JCF, it is like a member of our personal families , so we have supporting us, the entire Federation body, we have the executive of the Officers' Association, we have the senior officers, the Chaplaincy, we just continue to support each other. In these difficult times...we continue to find a way to remain resolute because we have lost from the same incident three police officers but we are coping, we are not going to roll over, we are going to be here to protect the Jamaican people. but we have lost a good officer...he worked very hard, as a result of his hard work that he gave his life for country, and we are going to celebrate what we know of him, and support the family in the best way we can," SSP Lindsay said.