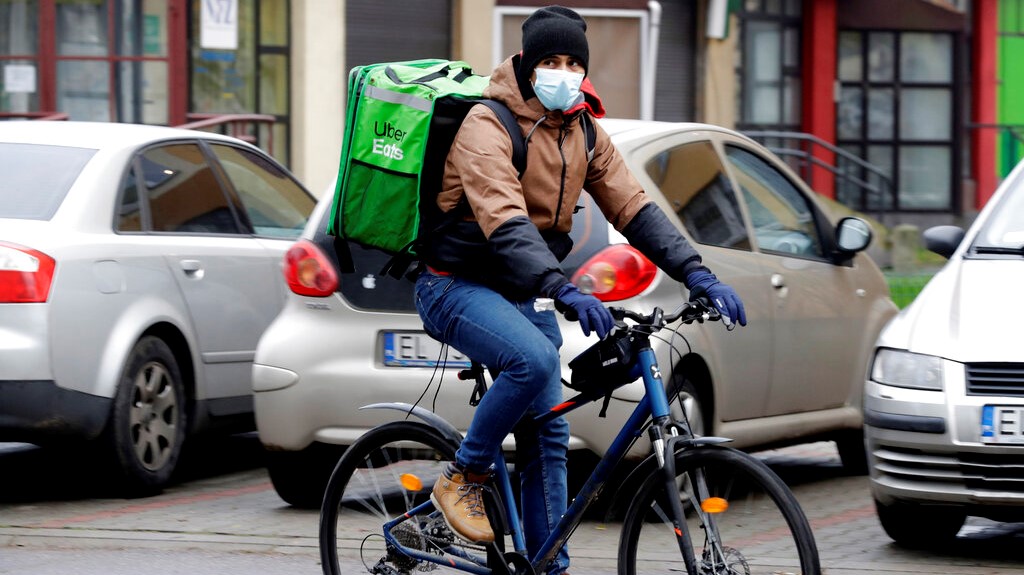 Back home in Venezuela, Ruben Limardo Gascon is hailed as a national hero for winning a gold medal in fencing at the 2012 London Olympics.

In Poland, where he has lived for years, he's taken up delivering food for Uber Eats to support his family as he trains for the Olympics in Tokyo next summer.

Every day after intensive training, he jumps on his bike, and with a green thermal bag on his back he crisscrosses the city of Lodz, where he lives with his wife and two children, delivering food to people's doorsteps.

With the global economic situation precarious amid the coronavirus pandemic and little chance for sponsorship, Limardo is grateful to have a job, particularly one that leaves him time for sports practice.

"There is no sponsorship now because there is no competition, but I still have to generate some resources to support my family," Limardo told The Associated Press in a short break between food deliveries last week.

The 35-year-old athlete responds to orders that ping on his phone up to 12 times a day.

On his phone, he also has photos of himself in competition and on top of the Olympic podium. He is training with his mindset on winning more Olympic medals in Tokyo and beyond "for myself and for Venezuela."

''I don't want to leave the sport because I still have a dream,'' Limardo said.

With a mask covering his face these days, fans of fencing have little chance of recognizing the Olympic gold medalist known for his modesty.

But some know about him and ask for selfies and take the opportunity to chat with the native of Ciudad Bolivar, who speaks perfect Polish.

"I am full of admiration (for you) because sports careers don't always go the easiest way and I'm really impressed that you continue to fight for your goals," a man who only gave his name as Bartlomiej told him when Limardo brought a delivery from McDonald's.

Limardo moved to Poland, which has a long tradition in fencing, some 20 years ago as a teen to train on the épée, the heaviest of modern fencing weapons.

He has also won gold in individual epee at the 2007 Pan American Games and at the 2006 and 2008 championships in Poland.

His gold medal from London is the second Olympic win ever for a Venezuelan, making him a celebrity in his native land.

He competed in the 2016 Olympics in Rio de Janeiro in the individual and team épée competitions but failed to secure any medals.

From his home in central Poland, he continues to root for Venezuela, which has seen problems including political discontent exacerbated by hyperinflation and shortages of food and medicine.

He says he hopes that things will "get sorted out" soon in Venezuela. In the meantime, he seeks to represent his country with pride.