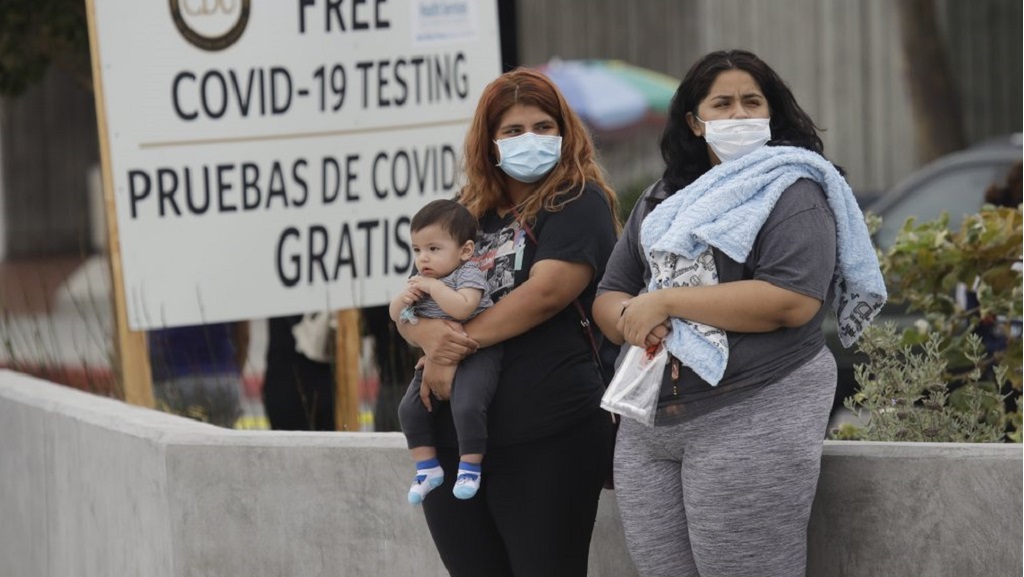 Two women and a child wait to take a Coronavirus test at a mobile testing site at the Charles Drew University of Medicine and Science Wednesday, July 22, 2020, in Los Angeles. California's confirmed coronavirus cases have topped 409,000, surpassing New York for most in the nation. (AP Photo/Marcio Jose Sanchez)

Laboratories across the US are buckling under a surge of coronavirus tests, creating long processing delays that experts say are undercutting the pandemic response.

With the US tally of confirmed infections at nearly 4 million Wednesday and new cases surging, the bottlenecks are creating problems for workers kept off the job while awaiting results, nursing homes struggling to keep the virus out and for the labs themselves as they deal with a crushing workload.

Some labs are taking weeks to return COVID-19 results, exacerbating fears that people without symptoms could be spreading the virus if they don't isolate while they wait.

"There's been this obsession with, 'How many tests are we doing per day?'" said Dr Tom Frieden, former director of the Centers for Disease Control and Prevention. "The question is how many tests are being done with results coming back within a day, where the individual tested is promptly isolated and their contacts are promptly warned."

Frieden and other public health experts have called on states to publicly report testing turnaround times, calling it an essential metric to measure progress against the virus.

The testing lags in the US come as the number of people confirmed to be infected worldwide passed a staggering 15 million, according to data compiled by Johns Hopkins University. The US leads the world in cases as well as deaths, which have exceeded 142,000.

New York, once by far the US leader in infections, has been surpassed by California, though that is partly due to robust testing in a state with more than twice the population of New York.

Guidelines issued by the CDC recommend that states lifting virus restrictions have a testing turnaround time of under four days. The agency recently issued new recommendations against retesting most COVID-19 patients to confirm they have recovered.

Zachrey Warner knows it all too well.

The 30-year-old waiter from Columbus, Ohio, was sent home from work on July 5 with a high fever a few days after he began feeling ill. He went for a test five days later at the request of his employer.

Almost two weeks and one missed pay period later, he finally got his answer Wednesday: negative.

Though Warner said most symptoms — including fever, diarrhea, chest tightness and body aches — stopped a few days after he was tested, he wasn't allowed to return to work without the result.

It was "frustrating that I've missed so much work due to testing taking forever," Warner said. "It is what it is ... (but) I'm glad I'm negative and happy to be able to get back to work this week."

Beyond the economic hurt the testing lags can cause, they pose major health risks, too.

In Florida, which reported 9,785 new cases and a rise in the death toll to nearly 5,500, nursing homes have been under an order to test all employees every two weeks. But long delays for results have some questioning the point.

Jay Solomon, CEO of Aviva in Sarasota, a senior community with a nursing home and assisted living facility, said results were taking up to 10 days to come back.

"It's almost like, what are we accomplishing in that time?" Solomon said. "If that person is not quarantined in that 7-10 days, are they spreading without realizing it?"

Test results that come back after two or three days are nearly worthless, many health experts say, because by then the window for tracing the person's contacts to prevent additional infections has essentially closed.

"The turnaround times, particularly across the South are too long," Dr Deborah Birx of the White House coronavirus task force said on Fox.

Birx said the US had shorter turnaround times in April, May and early June, but that "this surge and this degree of cases is so widespread compared to previously," she said.

Dr Leana Wen, a public health professor at George Washington University said it's reasonable to tell people awaiting test results to isolate for 24 hours, but the delays have been unacceptable.

"Imagine you tell a parent with young children to self-isolate for 10 days or more without knowing they actually have COVID? I mean, that's ridiculous. That's actually absurd," Wen said.

US officials have recently called for ramping up screening to include seemingly healthy Americans who may be unknowingly spreading the disease in their communities. But Quest Diagnostics, one of the nation's largest testing chains, said it can't keep up with demand and most patients will face waits of a week or longer for results.

Quest has urged health care providers to cut down on tests from low-priority individuals, such as those without symptoms or any contact with someone who has tested positive.

As testing has expanded, so have mask orders and other measures aimed at keeping infections down. Ohio, Indiana, Minnesota and Oregon became the latest to announce statewide mandatory mask orders Wednesday.

The US is testing over 700,000 people per day, up from less than 100,000 in March. Trump administration officials point out that roughly half of US tests are performed on rapid systems that give results in about 15 minutes or in hospitals, which typically process tests in about 24 hours. But last month, that still left some 9 million tests going through laboratories, which have been plagued by limited chemicals, machines and kits to develop COVID-19 tests.

There is no scientific consensus on the rate of testing needed to control the virus in the US, but experts have recommended for months that the US test at least 1 million to 3 million people daily.

Health experts assembled by the Rockefeller Foundation said last week that the US should scale up to testing 30 million Americans per week by the fall, when school reopenings and flu season are expected to further exacerbate the virus's spread.

The group acknowledged that will not be possible with the lab-based testing system.

The National Institutes of Health has set up a "shark tank" competition to quickly identify promising rapid tests and has received more than 600 applications. The goal is to have new testing options in mass production by the fall.

Until then, the backbone of US testing remains at several hundred labs with high-capacity machines capable of processing thousands of samples per day. Many say they could be processing far more tests if not for global shortages of testing chemicals and other materials.

Dr Bobbi Pritt of the Mayo Clinic in Rochester, Minnesota, says the hospital's machines are running at just 20 percent capacity. Lab technicians run seven different COVID-19 testing formats, switching back and forth depending on the availability of supplies.

At Emory University Hospital in Atlanta, lab workers lobby testing manufacturers on a weekly basis to provide more kits, chemicals and other materials.

"There's no planning ahead, we just do as many as we can and cross our fingers that we'll get more," said Dr Colleen Kraft, who heads the hospital's testing lab.

This story has been corrected to show that the CDC has issued guidelines recommending against repeat testing for patients recovering from coronavirus.