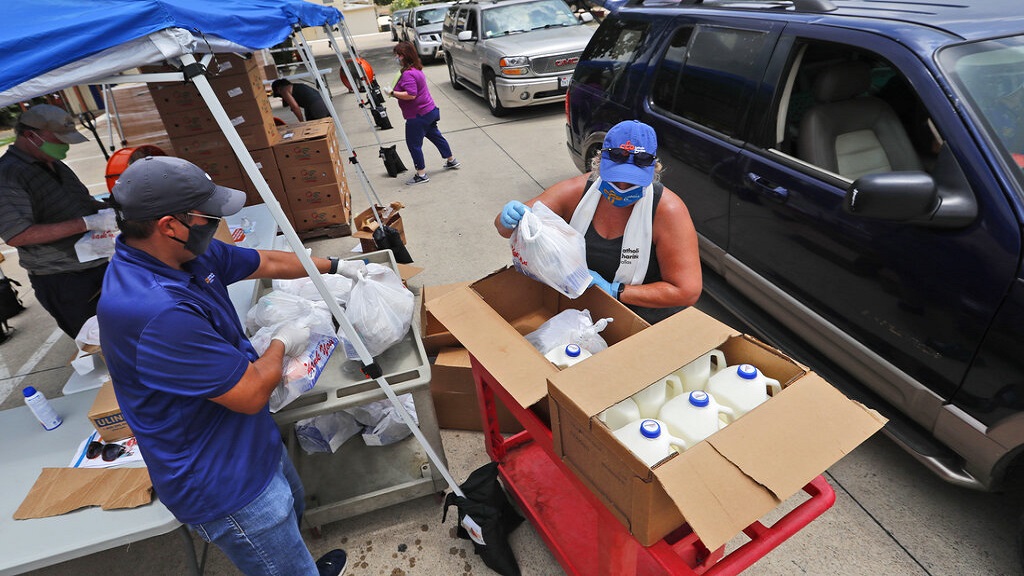 Wearing masks amid concerns of the spread of COVID-19, volunteers Karen Cooperstein, right, and Edwin Chinchilla, left, prepare food for the pubic during a drive through food pantry distribution by Catholic Charities in Dallas, Thursday, July 2, 2020. (AP Photo/LM Otero)

US unemployment fell to 11.1 per cent in June as the economy added a solid 4.8 million jobs, the government reported Thursday.

But the job-market recovery may already be faltering because of a new round of closings and layoffs triggered by a resurgence of the coronavirus.

While the jobless rate was down from 13.3 per cent in May, it is still at a Depression-era level. And the data was gathered during the second week of June, just before a number of states began to reverse or suspend the reopenings of their economies to try to beat back the virus.

“This is a bit of a dated snapshot at this point,” said Jesse Edgerton, an economist at J.P. Morgan Chase.

The news came as the number of confirmed infections per day in the US soared to an all-time high of 50,700, more than doubling over the past month, according to the count kept by Johns Hopkins University.

The spike, centred primarily in the South and West, has led states such as California, Texas, Arizona and Florida to re-close or otherwise clamp down again on bars, restaurants, movie theatres, beaches and swimming pools, throwing some workers out of a job for a second time.

President Donald Trump said the jobs report shows the economy is “roaring back,” though he acknowledged there are still areas where “we’re putting out the flames” of the virus.

Democratic presidential candidate Joe Biden responded, “Just like last month, President Trump has spiked the ball and made this about him. He doesn’t seem to realize he’s not even on the 50-yard line.”

Economists expect the recovery to take longer than Trump's optimistic projections, with the unemployment rate likely to be near double-digit levels by year's end.

“Even as we move into the second half of the year, a large number of people will still be looking for work,” said Eric Winograd, senior US economist at asset manager AllianceBernstein.

The shutdowns over the past two weeks will be reflected in the July unemployment report, to be released in early August.

While the job market improved in June for a second straight month, the Labour Department report showed that the US has recouped only about one-third of the colossal 22 million jobs lost during the lockdowns this spring. 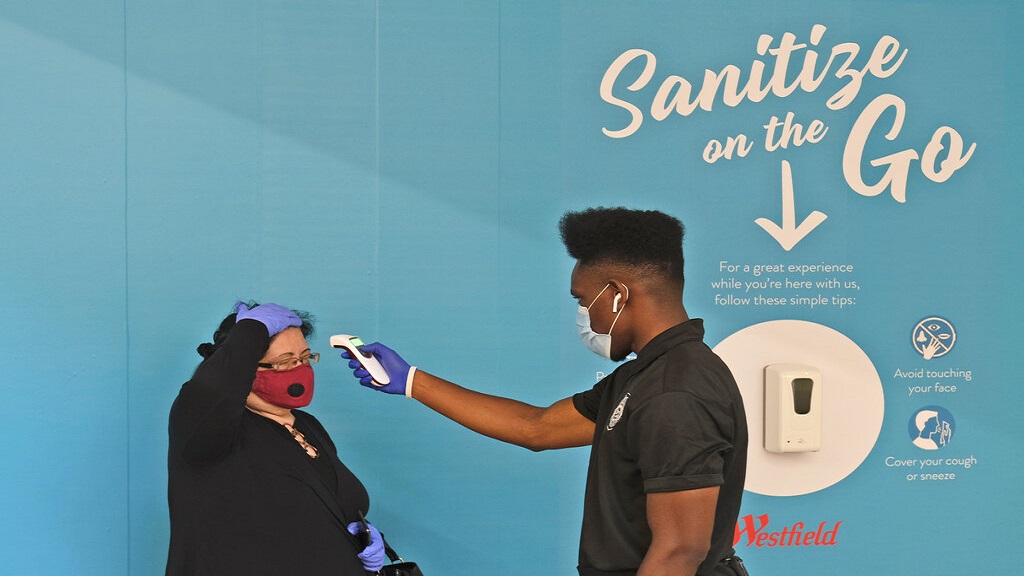 Layoffs are still running high: The number of Americans who applied for unemployment benefits fell only slightly last week to 1.4 million, according to the government. Though the weekly figure has declined steadily since peaking in March, it is still extraordinarily large by historic standards.

And the total number of people drawing jobless benefits remains at a sizable 19 million.

US job growth in June was driven mainly by companies recalling workers who had been laid off during the widespread business shutdowns across the country.

In an ominous trend contained in the Labour Department report, the number of Americans who said they had lost their jobs permanently rose by 600,000 last month to nearly 2.9 million.

Many businesses, particularly small ones, are shutting down for good even though the lockdowns have largely been lifted.

Erik Hurst, an economics professor at the University of Chicago, said many restaurants, bars and gyms can’t survive by operating at half-capacity, and customers are going to be cautious until there is a vaccine.

Fred Wellman's five employees are getting their final paychecks Friday as he closes down his public relations firm, ScoutComms. He was able to get a small-business loan from the government, but it wasn't enough.

He usually drums up most of his business at conferences, seminars and other in-person events. But “if people aren’t meeting in person, if people aren’t holding events, you don’t get a chance to mingle," he said.

The job gains of the past two months have partly resulted from unprecedented levels of government spending, including $1,200 relief checks, more than $500 billion in grants to small businesses, and an extra $600 a week in unemployment benefits.

Those payments enabled millions of Americans to cover the rent and other bills. Yet those programs are expiring or tailing off. The additional $600 in unemployment ends July 31.

“We could see a huge cliff,” said Julia Pollak, labor economist at ZipRecruiter. “Those expanded benefits will expire before new hiring has really picked up.”

Congress is debating another relief package. Treasury Secretary Steven Mnuchin said Thursday he supports something that is “much more targeted” to businesses that need it.

The number of laid-off workers seeking unemployment benefits rose last week in Texas, Arizona and Tennessee. It fell in California, but was near 280,000. That's more than the number of people who were seeking jobless benefits in the entire country before the outbreak took hold in March.

US consumer confidence rises to 98.1 in June

US relief cheques begin arriving as economic damage piles up