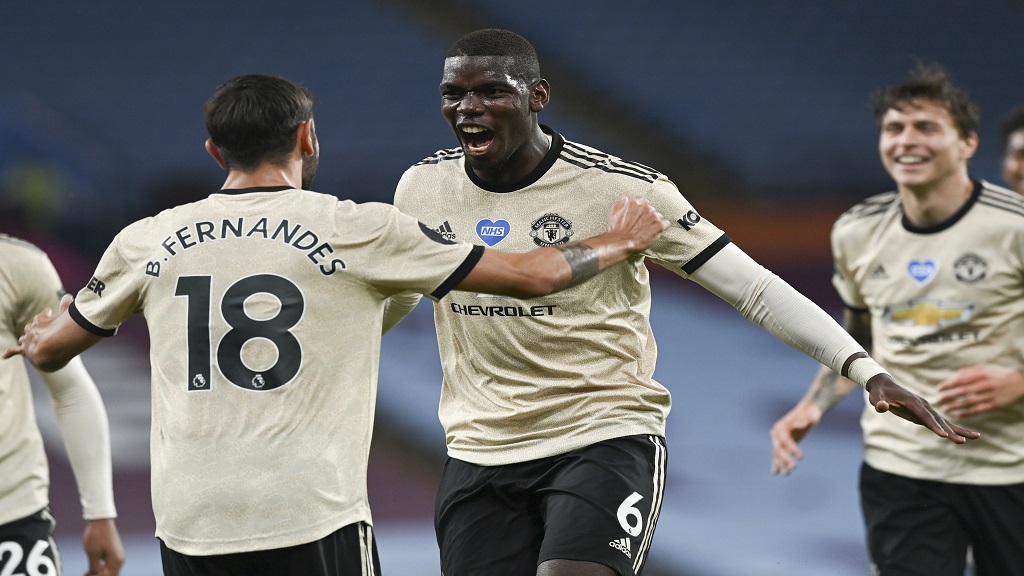 Bruno Fernandes converted a contentiously awarded penalty on Thursday to set Manchester United on their way to a 3-0 win over Aston Villa that featured a first goal of the season by Paul Pogba and another impressive strike by teenager Mason Greenwood.

United eased to a fourth straight Premier League win but only after going ahead in controversial circumstances in the 27th minute, with the visitors earning a penalty for a trip on Fernandes even though the playmaker appeared to commit a foul himself on Villa defender Ezri Konsa.

Fernandes sent goalkeeper Pepe Reina the wrong way for his seventh goal since joining from Sporting Lisbon in January and he also set up Pogba for United's third goal in the 58th minute with a pinpoint pass from a corner.

Pogba did the rest, curling home from the edge of the area for his first goal in any competition in an injury-plagued season for the France international.

Greenwood scored in between, his fourth goal in the last three games, and it was another demonstration of the 18-year-old forward's ability to score off either foot.

This time it was with his right, as he collected Anthony Martial's short pass at the end of a quick counterattack and smashed in a rising finish from the edge of the area.

United stayed in fifth place but moved to within a point of fourth-place Leicester with four games remaining. A fifth-place finish will be enough to qualify automatically for the Champions League this season unless second-place Manchester City manages to get their two-year European ban overturned in the courts.

United play Leicester in the final round of the season on July 26.

Villa dropped to next-to-last place on Thursday and are four points from safety as the team looks to avoid relegation after just one season back in the top flight.