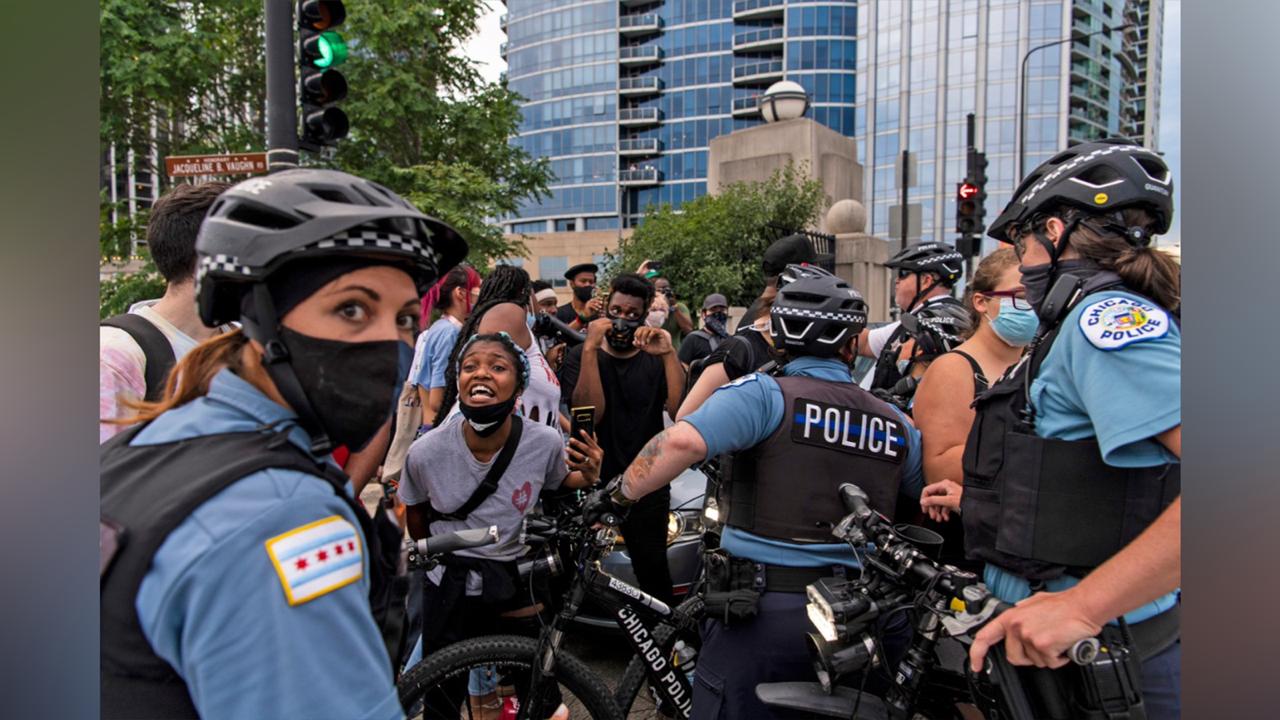 Chicago police and activists crowd around a vehicle that tried to drive through the protesters circle at the intersection of Roosevelt Rd. and Columbus Dr, Monday, July 20, 2020 in Chicago. (Tyler LaRiviere/Chicago Sun-Times via AP)

President Donald Trump is using the Department of Homeland Security in unprecedented ways as he tries to bolster his law and order credentials by making a heavy-handed show of force in cities around the nation in the lead-up to the November elections.

His plan to deploy federal agents to Chicago and perhaps other Democratic-run cities where violence is spiking represents Trump's latest effort to use an agency that was created after the Sept. 11 attacks to thwart terrorists to instead supplement local law enforcement in ways that bolster his reelection chances.

Trump has already deployed Homeland Security agents to Portland on the grounds of protecting federal buildings from protesters, drawing intense criticism from local leaders who say the federal presence has only exacerbated tensions rather than promoting public safety.

“This is precisely the type of tyrannical deployment of power that the Founding Fathers were specifically worried about,” said Jeffrey A. Engel, director of Center for Presidential History at Southern Methodist University.

Under Trump's latest plan, yet to be publicly announced, about 150 Homeland Security Investigations agents would go to Chicago to help local law enforcement deal with a spike in crime, according to an official with direct knowledge of the plans who spoke on condition of anonymity because they weren't authorized to speak publicly.

Those agents, who are generally used to investigate human trafficking, drugs and weapons smuggling, are expected to stay in Chicago at least two months, according to the official. It's not clear exactly when they would arrive or how their mission would play out, but they would work under the Justice Department.

White House Press Secretary Kayleigh McEnany said no one had been sent to Chicago yet. She added, “The bottom line is that this president stands with law and order, which leads to peace."

In a tweet Sunday, Trump blamed local leaders for a growing spate of violence in cities like Chicago that has left dozens dead, including young children. He added a dire warning that “The Radical Left Democrats, who totally control Biden, will destroy our Country as we know it,” referring to Democratic rival Joe Biden.

Trump has also intervened in other cities, including Washington, D.C. In the protests following the death of George Floyd in Minneapolis, Trump deployed U.S. National Guard troops and federal law enforcement officials from agencies including U.S. Customs and Border Protection and the Drug Enforcement Administration to patrol the city.

The show of force came to a head when federal authorities in riot gear dispersed crowds from Lafayette Square across from the White House, where the president then posed with a Bible in front of a church.

The Chicago plan appears to be an extension of a separate operation in which the administration sent more than 100 federal law enforcement officers to Kansas City, Missouri, to help quell a record rise in violence after the shooting death of a young boy there. The Justice Department doesn’t have the manpower to surge agents to high-crime areas, so it is borrowing from Homeland Security.

Chicago Mayor Lori Lightfoot was at first highly resistant, but her tone changed after she and members of her administration, along with Police Superintendent David Brown, talked with officials about the government's plan.

The comments from Lightfoot, a former federal prosecutor, slightly deescalated a days-long war of words with Trump over violent crime in the city, which has seen 414 homicides this year, compared with 275 during the same period in 2019.

Throughout his presidency, Trump has leaned on Homeland Security to carry out his political objectives, including cracking down on illegal immigration and slowing legal immigration applications. The 240,000-person agency manages border security as well as natural disasters and the Transportation Security Administration.

But with the border largely shuttered because of the coronavirus and the number of illegal crossings plummeting, Trump is now using the department to combat crime and demonstrations demanding justice and racial equality.

While the protests have largely been peaceful, Trump and his allies in conservative media have portrayed the cities as out of control as he tries to contrast himself with Biden and make the case to voters — especially the suburban women who turned against Republicans in the 2018 midterms — that failing to elect him for a second term will lead to lawlessness.

Critics say the federal forces have stoked tensions, creating new images of violence that could lead frightened viewers to vote for Trump.

Homeland Security first jumped into the federal response to the Floyd protests in May as some demonstrations erupted into sporadic violence around the country. But effort shifted into high gear over the July Fourth weekend as Homeland Security agents and officers from at least a half a dozen components of the sprawling organization were arriving in Portland.

Protesters there have been staging nightly demonstrations since May in a section of downtown that includes the federal courthouse, forcing most businesses in the zone to close.

Acting Homeland Security Secretary Chad Wolf said federal personnel have been assaulted with lasers, bats, fireworks, bottles and other weapons and “yet the city of Portland takes little to no action.”

Wolf said the people committing the vandalism should not be considered legitimate protesters. He said DHS officers wear camouflage because that’s their uniform when they work on the border. “These police officers are not stormtroopers, they are not Gestapo. That description is offensive,” Wolf said.

But former Homeland Security officials say they’ve seen nothing like the Portland deployment, which has included using highly trained Border Patrol agents to confront protesters outside the downtown courthouse, without the cooperation or consent of local law enforcement or government officials.

Arrests made by federal officers over the July Fourth weekend and several days after were for relatively minor offences not typically prosecuted in federal court, including misdemeanour assault and disorderly conduct. Officials have accused some demonstrators of assaulting federal officers, by shining lasers in their eyes or other means, and said at least one person was detained with the ingredients for a pipe bomb.

John Cohen, a former senior DHS official under Obama and President George W. Bush, said such a high-profile presence of federal agents without local support created the risk of escalating the situation, and that appears to be what happened.

The protests have grown in recent days, particularly after federal officers in unmarked vans and with generic “police” patches last week detained several people on downtown streets without identifying themselves — a move some critics have compared to kidnappings.

David Lapan, a retired Marine colonel who served as Homeland Security press secretary as well as a public affairs officer for the Defense Department, said he worried about a blurring line between military and law enforcement that "creates the impression the military is being used to suppress the public.”

The House Homeland and Judiciary Committees have both demanded an investigation.

“The legal basis for this use of force has never been explained — and, frankly, it is not at all clear that the Attorney General and the Acting Secretary are authorized to deploy federal law enforcement officers in this manner,” read a letter signed by Democratic Reps. Jerry Nadler of the Judiciary committee and Bennie Thompson of the Homeland Security committee.

Trump to US schools: Reopen or you may lose federal funds