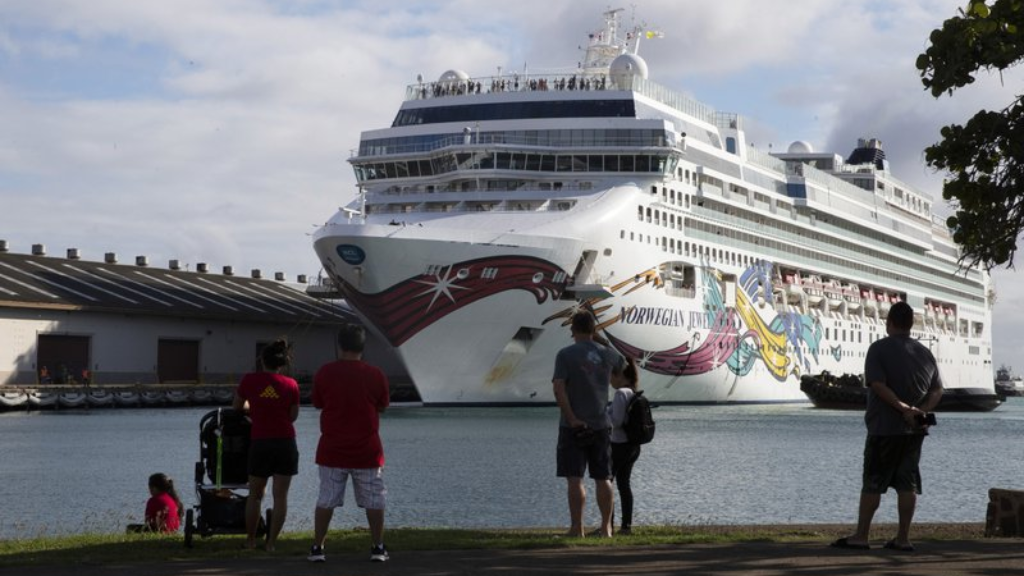 The Norwegian Jewel cruise ship docks at Honolulu Harbor on Sunday, March 22, 2020. The cruise ship that had to cut short its trip because of the new coronavirus and mechanical problems docked Sunday in Honolulu's harbor. (Cindy Ellen Russell/Honolulu Star-Advertiser via AP)

A cruise ship that had to cut short its trip because of the coronavirus and mechanical problems docked Sunday in Honolulu's harbour.

The Norwegian Jewel, which carried about 2,000 passengers, docked in the late afternoon, the Honolulu Star-Advertiser reported.

The ship has problems with its propulsion, which will be repaired at Honolulu's harbour, the Hawaii Department of Transportation said. The repairs to the ship must be made without passengers aboard, the department added.

"A detailed plan is being developed with Norwegian Cruise Line that keeps passengers isolated to avoid any potential strain on Hawaii's resources, while also addressing the well-being of the cruise line passengers who have been at sea for a very long time," said Jade Butay, director of the Hawaii Department of Transportation.

The ship had to cut short its 23-day cruise of Australia and French Polynesia because many ports were closed due to the coronavirus, the ship's owner, Norwegian Cruise Line, said in a statement.

The passengers last disembarked in Fiji on March 11, the transportation department said.

Charter flights have been arranged for ship passengers on Monday and Tuesday from Honolulu to Los Angeles; Sydney; London; Vancouver, British Columbia; and Frankfurt, Germany, the company said.

"Because of the additional precautions we are taking in response to the COVID-19 crisis, it will take some time to transport these passengers safely to their chartered planes and we thank the public for its cooperation and understanding," Butay said.

There are no confirmed cases of the coronavirus among the ship's 2,000 passengers and 1,000 crew members, the transportation department said.

On Thursday, the Norwegian Cruise Line said the Norwegian Jewel was turned away by Fiji and New Zealand. The ship had refuelled in American Samoa but was not allowed to disembark at the Port of Pago Pago.

The Norwegian Cruise Line suspended the ship for all voyages from March 13 to April 11.

"Please know that we will continue to consult with The World Health Organization (WHO) and the U.S. Centers for Disease Control and Prevention (CDC) to take action as necessary," the company said in a statement.

"Our business also relies on the availability and accessibility of ports around the world. As such, we will continue to monitor the situation and evaluate the feasibility of redeploying our ships as planned on April 12, 2020."

Coronavirus: Who's at risk?