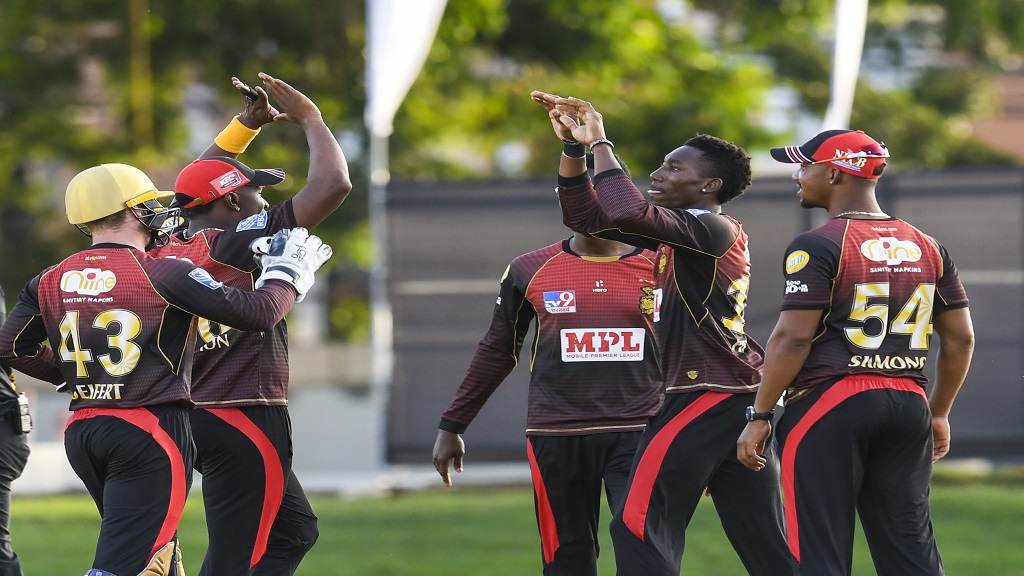 The win made it five for five for the Knight Riders who secure two points to create further distance between them and the rest of the CPL field.

The five-time tournament runners-up Amazon Warriors continued their batting woes after being sent in, losing three wickets in the first 16 balls on their way to 112 for seven off their allotted 20 overs

Facing a modest target, the Knight Riders replied with 117 for three to pass the victory target with 10 balls to spare.

Sikandar Raza opened the bowling for the Knight Riders and turned his first ball sharply but his sixth went straight on to bowl Brandon King for six, and Khary Pierre deceived Chandrapaul Hemraj (two) and Nicholas Pooran (one) to leave the Amazon Warriors 12 for three.

Ross Taylor was positive, pulling Raza hard for four. Kieron Pollard almost pulled off a blinder at silly-point, just failing to hold as Ross Taylor lunged forward off Pierre. But Taylor found Raza easier, cutting for four, slog-sweeping in trademark fashion for six, and paddle-sweeping for another four to take the Amazon Warriors to 39 for three off the powerplay.

Fawad Ahmed troubled Shimron Hetmyer with his googly, but unlike many others Hetmyer was able to find singles. Pollard brought himself on, but even someone with his experience couldn’t have expected what happened next.

Taylor took only a few strides before turning around, but keeper Tim Seifert was out of the blocks like a sprinter, got to the ball while taking off one glove, and in mid-air threw down one stump with the batsman still scrambling. It was a spectacular piece of work, and left the Amazon Warriors 44 for four after 8 overs. Taylor was rn out for 26 off 23 balls.

Fawad and Pollard hustled towards the drinks break. Seifert dropped Sherfane Rutherford on one, but with the Amazon Warriors 51 for four at the halfway stage, Pollard was the happier captain. Fawad used the googly well to keep the 11th over quiet, and in the 12th on came Wednesday's history-maker, Dwayne Bravo, who also only went for singles.

When Pierre returned, Rutherford launched into a slog-sweep, but then came more fielding magic. Tion Webster took the catch as it came over his shoulder, released the ball millimetres from the rope, and stopped his momentum in time to run back into the field of play and re-catch the ball. It was a masterpiece and Rutherford was dismissed for six.

Colin Munro dropped a sitter to gift Hetmyer a six and deny Pierre a fourth wicket. But the reprieve didn’t last long - Hetmyer smashed Dwayne Bravo straight to cover to leave the Amazon Warriors 77 for six off 16. The lower order energised the innings - Keemo Paul punished Fawad for overpitching by launching him over the sightscreen, and Romario Shepherd sent a Dwayne Bravo length ball out of the ground.

A back spasm had forced Ali Khan out of the game early, but Pollard filled in well at the death to pick up his first wicket of the tournament, Seifert diving to hold a steepling Romario Shepherd top edge.Shepherd made 11 from 10 balls.

Paul responded with a flat-bat six, but Dwayne Bravo was as good as ever in the 20th, conceding just five and sending his team into the innings break strong favourites.

Green was forced to go to Naveen-ul-Haq, who spoiled an otherwise good over by gifting Simmons a four down the leg-side, and at 32 without loss off five overs, the Knight Riders were comfortable.

Tahir did his best to change that. First a googly ripped past Simmons’ slog and he was bowled for a run-a-ball 19.  The next ball a big leg-break did the same to Munro who was dismissed without scoring, and though Darren Bravo denied Tahir the hat-trick the Knight Riders needed to reset.

Green and Paul were accurate, but Webster ended a run of 26 boundary-less balls by spanking a six. As a bonus he drove Shepherd for four, and at halfway the Knight Riders were well-set at 51 for two chasing a victory target of 113.

Captain Green ended Webster’s charge, with Hetmyer taking a smart low catch to dismiss the batsman for 27.  Seifert was lucky not to be bowled at least once by Paul, but found a gap at square leg to close the 12th over with a four.

Naveen returned and went for just four, and with two overs of Tahir looming Green invited the Knight Riders to attack Shepherd. Seifert and Darren Bravo took the bait, and the over went for 13 to leave the Knight Riders needing 35 off 36 balls.

Green opted to only use one of Tahir’s overs, and it went for just two. A Paul over went boundary-less, and off Naveen Hetmyer very nearly outdid Webster’s earlier effort, leaping athletically to hold and release a Darren Bravo loft before he hit the rope, but Green wasn’t quite close enough to take the release.

Darren Bravo did, however, clear the ropes in that over as Naveen served him a juicy full toss, and Seifert went after the first ball of Tahir’s last over and hit it miles. With the pressure now off, the over went for 11, and Seifert sealed the win with two crunching fours to finish unbeaten on 39 from 30 balls.

He and Darren Bravo, who made an unbeaten 26 from 28 balls, had again finished what the bowlers had started, and the Knight Riders machine rolled on. It’s instructive, and worrying for the other five franchises, that once again Sunil Narine’s absence was hardly mentioned.