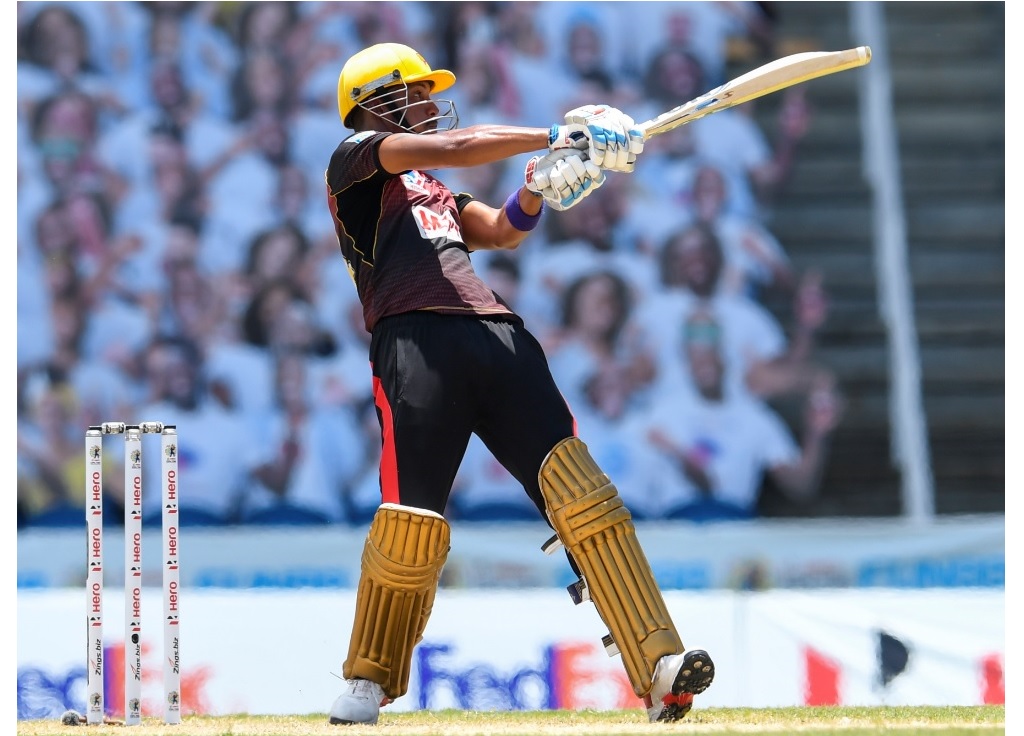 Lendl Simmons of Trinbago Knight Riders hits a six during the first semi-final of the 2020 Hero Caribbean Premier League against Jamaica Tallawahs, at the Brian Lara Cricket Academy, in Tarouba, Trinidad and Tobago, on Tuesday, September 8. (Photo by Randy Brooks - CPL T20/CPL T20 via Getty Images).

Jamaica Tallawahs were no match for Trinbago Knight Riders in the first semi-final of the 2020 Caribbean Premier League (CPL) as the host country sealed a spot in the final for the fourth time with a nine wicket victory, at the Brian Lara Cricket Academy, on Tuesday.

After winning the toss electing to field, the Knight Riders' two left-arm spinners - Akeal Hosein and Khary Pierre - shared five wickets  to restrict the Tallawahs to 107.  And needing 108 to win, Lendl Simmons (44-ball 54) and Tion Webster (43-ball 44) shared an unbeaten 97-run stand to chase the target down with five overs to spare.

The victory leaves, the Knight Riders one win away from completing the first perfect season in Hero CPL history.

Knight Riders captain Kieron Pollard had enough faith in his opening bowlers to start with himself at short leg, and Hosein repaid that faith by bowling Jermaine Blackwood for a duck. The Tallawahs sprung a surprise sending Mujeeb Ur Rahman in at number three, who just about played out a wicket-maiden.

The Tallawahs were rocked further when Glenn Phillips cut Pierre to Ali Khan and was caught for two. Nkrumah Bonner finally hit the game’s first boundary, easing Hosein through cover, but the Mujeeb experiment failed as he edged a reverse sweep onto his pad and was caught at slip without scoring, and the Tallawahs had slumped to 10 for three off three overs.

Five wides from Pierre and a straight four by Bonner more than doubled the Tallawahs tally, but while Asif Ali got off the mark with a four over Hosein’s head he fell next ball for four cutting to Pollard at point. Pollard immediately went back into short leg, and kept himself there for the returning Sunil Narine who went for just three to close out a dominant powerplay for the Knight Riders, after which the Tallawahs were reeling at 28 for four.

Bonner continued to resist - he cut Fawad Ahmed powerfully for four, a misfield gave him another off Narine to take him to 30, and he pulled Fawad to take the Tallawahs past 50. Pierre returned with a tight over that went for just three, and after 10 of the 20 overs, Tallawahs were struggling on 55 for four.

Hosein bowled out with an over of just five, and Fawad ended Bonner’s resistance with a quick googly that bowled the batsman for 41. That finally brought Andre Russell to the crease, but Narine put an end to his innings before it got going. Russell was beaten in the flight, the ball looped to Dwayne Bravo at slip and the umpire adjudged it came off bat and pad and the batsman was dismissed for two. The Tallawahs had lost their biggest weapon, and were 68 for six in the 14th.

Three more boundary-less overs came and went. Captain Rovman Powell had now faced 32 balls for his 26 runs, Carlos Brathwaite had managed only one off his 10 balls, and something had to give off Pierre’s last over. Powell hit one six, the first of the innings, but picked out Pollard at deep mid-off trying to repeat the shot next ball and was dismissed for 33. Even with that six, he finished under a run a ball, and the Tallawahs were 92 for seven off 18.

Brathwaite was lucky not to be run out first ball of the 19th, bowled by Dwayne Bravo whose three overs didn’t contain a single boundary. Ali Khan got the unusual job of bowling only the 20th over, and while Brathwaite finished the innings with a six, that was only the third boundary in the last 11 overs of the innings.

In the chase of the victory target, Simmons steered then pulled Fidel Edwards for consecutive fours to end the first over, but Narine wasn’t able to provide his usual powerful start, bowled by Mujeeb’s arm ball for four. Powell followed Pollard’s aggressive lead by putting himself at short leg, but Tion Webster was not intimidated, slapping Veerasammy Permaul through cover then slicing him for four to ruin a tight start to the over. After three overs, the Knight Riders were 23 for one.

Webster was confident enough to cut Mujeeb’s googly for four, and with wickets a must Powell for the first time in Hero CPL 2020 went to Sandeep Lamichhane in the powerplay. Simmons paddled him for four first ball and then pulled Mujeeb to the fence, and the Knight Riders closed the powerplay at 42 for one. The required run rate was already under five an over.

Simmons marred a good over from Lamichhane with a slog-swept six, bringing up the Knight Riders’ 50. Simmons and Webster were able to work Lamichhane around as no-one had all tournament, and though Permaul’s second went for just two and his third was a maiden, at the halfway stage, the Knight Riders were comfortable at 61 for one, needing just 47 more to win.

Russell was called on to bowl, but Simmons pulled him for a six.  when Russell bowled a second short ball, which was called a no-ball, Simmons hammered the free hit for four. Permaul bowled out with another economical over, but Simmons again pulled Russell for six to take 10 off the 13th over. The Knight Riders were now 90 for one and needed just 18 more.

Webster guided Lamichhane through cover for four to end the Nepali’s only wicketless spell of an excellent tournament, and Simmons became the leading 50-maker in the tournament’s history, overtaking Chris Gayle with a cover drive for four off Brathwaite, and Webster finished the job that same over.

Simmons needs just three more runs in Thursday’s final against either Guyana Amazon Warriors or St Lucia Zouks to overtake Gayle as  CPL’s all-time leading scorer. Much more importantly though, the Knight Riders have a chance to do what last year’s Guyana Amazon Warriors could not, and in doing so win a fourth Hero CPL title. The victors in the second semi will have a mighty task to deny them.