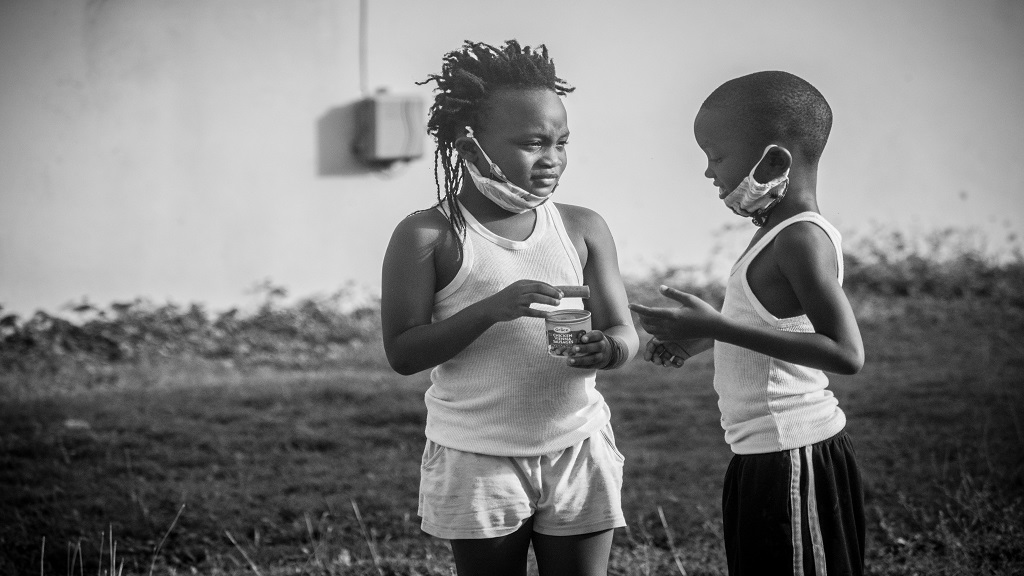 The winning photo by Tevin Ashman. The piece was entered under the category “Acts of Kindness.”

Second place went to Marina Burnell and third place to Joshua Gordon. The competition, which was launched in June, provided an opportunity for the use of photography to share and reflect on the Jamaican experience with the coronavirus pandemic.

Speaking about his entry, which depicts two children sharing a meal, Tevin said when he saw the children’s kindness to each other, it struck a chord in him.

“When I saw them sharing a meal, I said to myself this would be a good picture to take especially during this COVID-19 pandemic when so many persons are being negatively impacted but yet the human kindness was still there with these children,” he said.

The Maverly resident is hoping to use his prize money to invest in his photography business, which he hopes to expand during the next five years.

“I was very happy when I found out that I won, as this exposure can really assist me in the development of my business,” he related.

His encouragement to other photographers are to pursue their passion, ask for assistance especially from seasoned photographers and invest in themselves.

“You have to believe in what you are doing, be confident and just keep at it,” he said.

Burnell, the second place winner, is a street photographer who has been capturing images of Jamaica under COVID-19. She was sent a link to the competition and decided to enter.  Her winning piece was entered under the theme: ‘Changing traditions: The new norm’, where she captured the Coronation Market scene.

“The Coronation Market is an outstanding landmark in Jamaica and if you are going to show how COVID-19 is affecting Jamaicans, this is a good scene as a lot of people go there; it represents the Jamaican life in its authentic form,” she said.

Gordon’s entry, under the theme ‘The Hustle’, which landed her third place, captured his tailor sewing masks.

“Initially when I learnt about this competition, I was trying to think outside of the box. I decided to feature my tailor who is playing a major role in the ‘new norm’ in today’s society brought on by COVID-19,” he explained.

“The image stood out for me as it depicted him in his elements making something that will be of major help in the society.”

Gordon, a second year student at the University of Technology, said that he had put in a lot of work and he was confident it would pay off.

“When I went on the page which announced the winners, I was looking for my name. The only surprise for me would have been if the image was not placed,” he shared.

Stuart Reeves, lead judge, said the entries were appealing and highlighted several issues being faced during this era of COVID-19.

Onyka Barrett Scott, general manager of the JN Foundation, said the competition achieved its objectives, which were to: serve as a conduit for the expression of artistic talents and contribute to the preservation of collective memory of history.

“The submissions were outstanding, and the JN Foundation is proud to have been able to facilitate this artistic expression of this moment in our history,” she affirmed.