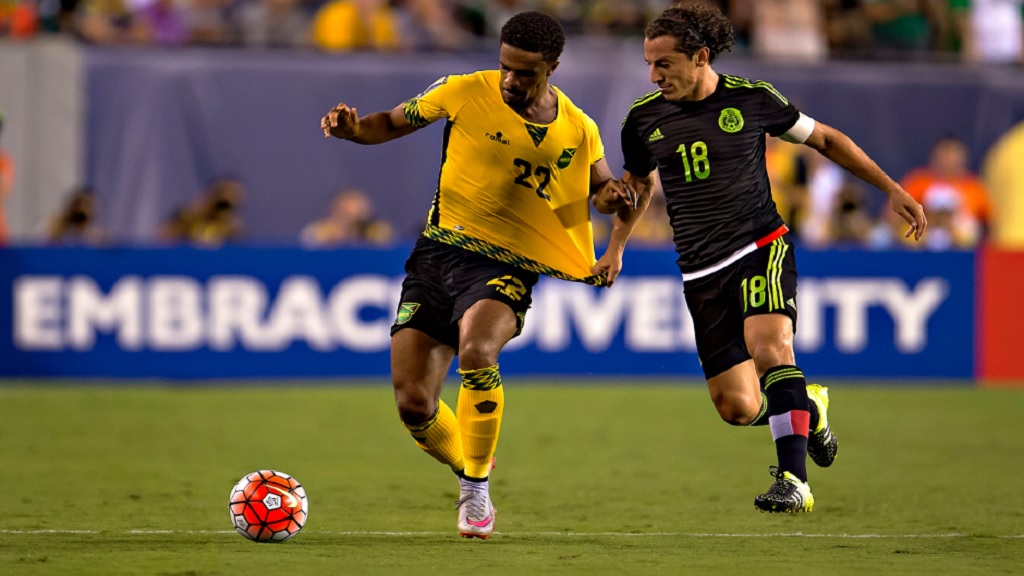 Garath McCleary of Jamaica (left) seeks for the ball against Mexico´s Andres Guardado in the 2015 Concacaf Gold Cup final at Lincoln Financial Field in Philadelphia on July 26, 2015. (PHOTO: Concacaf.com).

The 2015 Concacaf Gold Cup was a history-making affair for Jamaica’s senior football team, which reached the final of the tournament after the Reggae Boyz defeated the United States 2-1 in the semifinals on July 22.

Darren Mattocks and Giles Barnes netted minutes apart to give Jamaica a 2-0 lead in the 36th minute, and Michael Bradley’s second-half goal was all the USA could manage in bowing out of the Gold Cup in Atlanta.

In the end, Jamaica beame the first Caribbean team to make a Gold Cup final, stopping the USA in their quest to go to a sixth-straight final.

Mexico had survived by the thinnest of margins in their 2-1 extra time victory over Panama in the other semifinal, setting up a wide-open final on July 26, 2015 at the Lincoln Financial Field in Philadelphia.

The El Tricolor attack had struggled up until that point in the knockout round with not a single goal from open play in the quarterfinals and semifinals, but that all changed in a hurry in the final when Golden Ball winner Andres Guardado scored in the 31st minute on a left-footed volley to give Mexico a 1-0 lead against the history-making Reggae Boyz.

Before the opening goal Mexico had much of the possession but unable to unlock Jamaica’s final third. The Carribbean nation, taking orders from German Winfried 'Winnie' Schafer, had an early set-piece that Randolph Austin sent just wide.

The momentum stayed with Mexico to start the second half and two minutes after the re-start, Jesus Corona doubled the lead to 2-0 with an excellent left-footed finish.

Mexico’s football was in free-flow and by the 61st minute it was 3-0 when a Jamaica giveaway deep in their own half allowed Oribe Peralta to pounce and sweep a right-footed shot into net.

The Reggae Boyz were not about to give up, though, and they pulled a goal back, 3-1, in the 80th minute through Darren Mattocks, whose right-footed shot beat Mexico goalkeeper Guillermo Ochoa.

In the end though, the night belonged to Mexico, who saw out the rest of the contest to earn their seventh Gold Cup crown. However, it  was a special moment for Jamaica's Reggae Boyz.

And then there were 8: CONCACAF hexagonal becomes octagonal