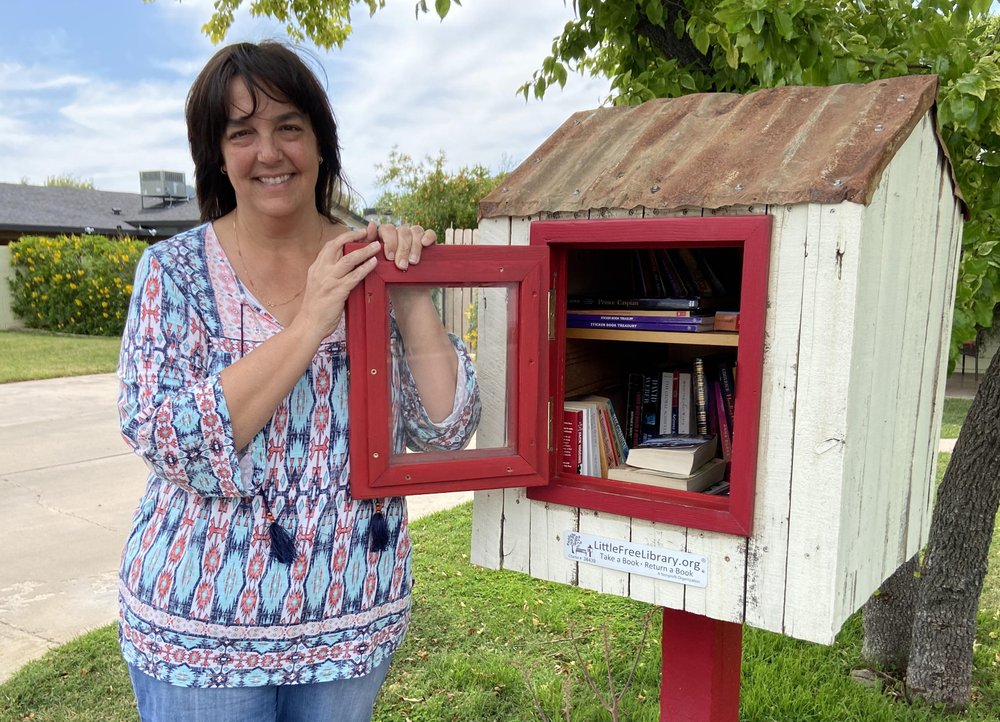 Kerri Kaplan, a fifth grade teacher, stands next to a small library she has in her front yard in Phoenix, Arizona. As government orders shuttered public libraries to slow the spread of coronavirus, some have turned to official and unofficial book-sharing means to satisfy their desire for new reading material. (AP Photo/Michelle A Monroe)

Christine Gale Reynolds worked at the public library in Yosemite National Park before it closed in March when California Governor Gavin Newsom issued shutdown orders to slow the spread of the coronavirus.

So, she filled the back of her car with donated books and began her own mobile library.

“I know this may not be legal, conventional, or ethically sound, and yet it has worked for many, and I feel of use,” she said.

She physically distances while making her stops and sanitises the books.

Across the United States, volunteers are reporting a jump in little free libraries as readers look to pass the time.

Made of wood or brick, and placed in front of parks or in the trunk of a car, the libraries have seen their small spaces overwhelmed with books. 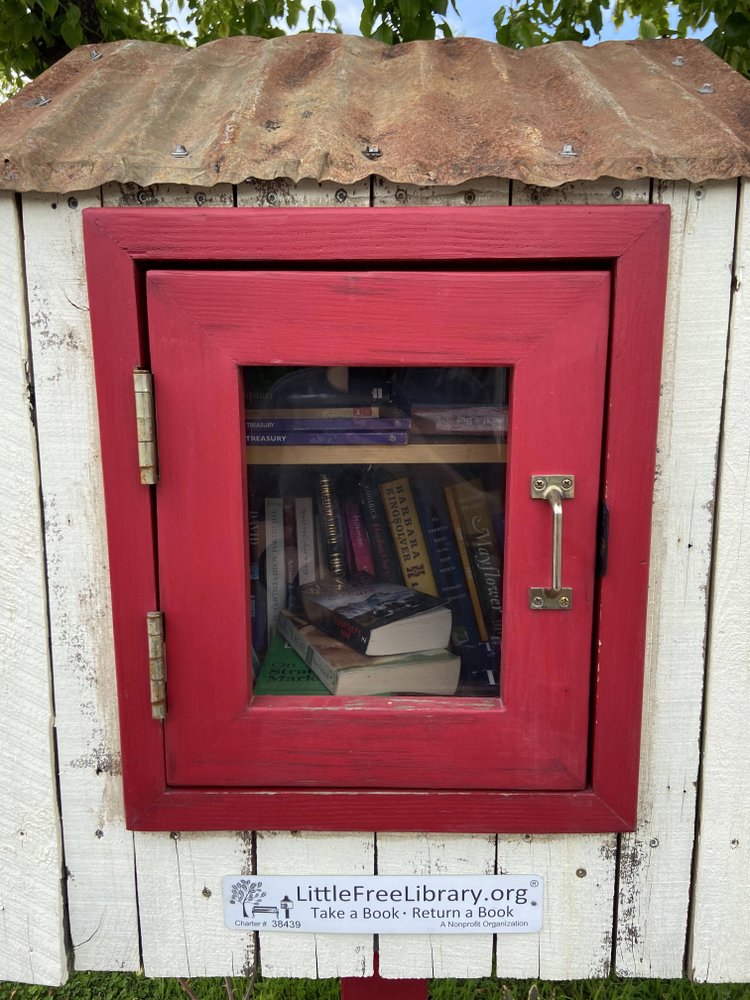 The small library Kaplan built in her front yard in Phoenix, Arizona. (AP Photo/Michelle A Monroe)

Whether it’s Love in the Time of Cholera by Gabriel García Márquez or children’s books or Macbeth, the libraries provide some their only interaction of the day outside of the home.

Since 2009, tens of thousands of little free libraries have sprung up in the US and more than 100 countries. The small spaces operate by donations and through volunteers.

In rural areas, where broadband internet is sparse, the little free libraries may be the only place to find a Toni Morrison novel.

In March, the Hudson, Wisconsin-based Little Free Library non-profit group unveiled its 100,000th book-sharing box — donated to the Association for the Advancement of Mexican Americans in a historic Latino neighbourhood in Houston. 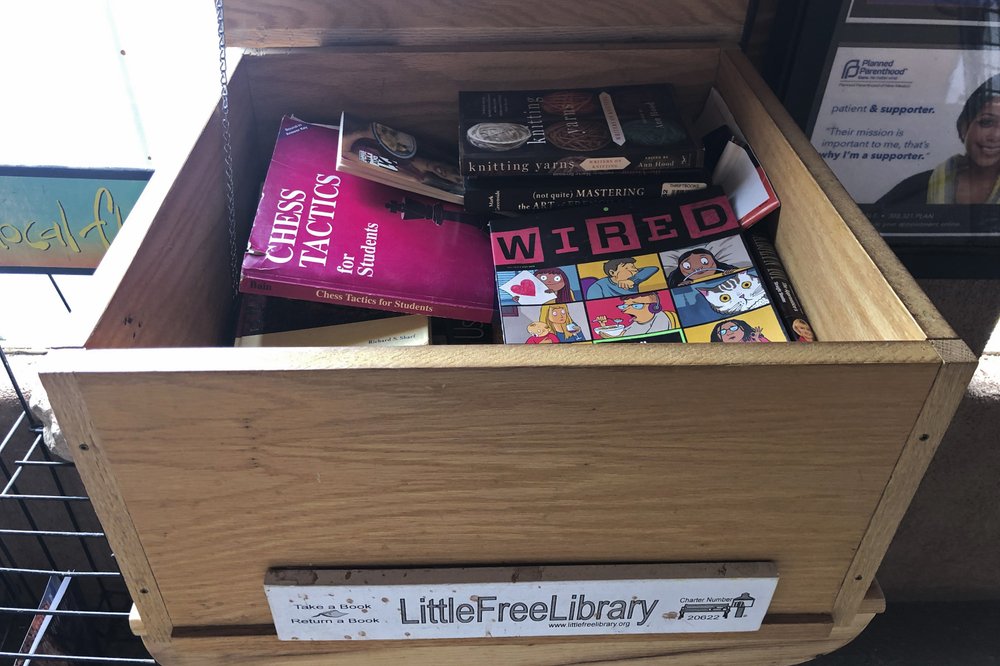 The free libraries have become so popular in recent weeks the Little Free Library group issued recommendations to stewards on helping keep the spaces clean by using disinfectant and following US Centers for Disease Control and Prevention guidelines.

“We have definitely seen an increase in use,” said John Sweet, who helps oversee a free library in Bend, Oregon.

He said volunteers check their free library weekly, and the selection is always different than the week before; sometimes there are even jigsaw puzzles.

Janelle Will of Akron, Michigan, said her tiny farm village of 300 people doesn’t have a public library, but its free library remains busy.

“I am using my stash to keep it filled and Lysol the books before placing them in the library,” she said.

Only around 1,000 people live in the Yosemite Valley where entertainment options are limited and some residents say Gale Reynolds’ mobile library — and her friendly chats — offer a needed break.

“I live in a rural area, so internet is not a guarantee, so time that some people might fill with Netflix or other online streaming services is not an option for me.”

“I turned to books to fill that gap,” said Connor Timpone, who lives in El Portal, east of Yosemite Valley.

“Books have been a bright spot through these past few weeks for me.”

A little free library sits in Bend, Oregon. Across the United States, volunteers are reporting a jump in usages of official and unofficial tiny popups known as little free libraries as readers look to pass the time amid COVID-19 health restriction. From the American Southwest to New England, little free libraries made of wood or brick, placed in front of parks or in the trunk of a car, have seen their small spaces overwhelmed with books. (John H Sweet via AP)

In the mountain community of Placitas, New Mexico, the little free library outside a food co-op was packed this month with DVD copies of Better Call Saul — the popular prequel to AMC’s Breaking Bad, which was filmed in nearby Albuquerque.

Rita Harkins Dickinson, a retired educator in Phoenix, Arizona, can’t recall ever seeing so many people peek at the little library in her front yard, including parents with very young children.

“Since more people are walking, I think they’re noticing it,” Dickinson said. “We have more families and more people who look to be retired.”

Kerri Kaplan, a fifth-grade teacher in Phoenix, built a public bookcase for her front yard years ago and says more people have been selecting and donating books since the pandemic.

“I used to have to stock it more myself, and now it runs itself,” Kaplan said.

Greig Metzger, executive director of the Little Free Library non-profit, said the spaces also have transformed into a new purpose.

Readers are leaving can goods and other needed items to assist fellow neighbours during the economic downturn and uncertainty.

“They’ve allowed neighbours to help one another without getting physically close,” Metzger said.

Tara La O Garcia, a teacher in Phoenix, said that’s why she publicised her little free library in front of her school.

It’s used by neighbours and some nearby homeless people.

“I also put in school supplies, snacks, toys, and puzzles so that families have things to do at home that are not on a screen,” she said.

“My mom,” she said, “has even made cotton washable masks to put inside.”