Sleuths believe a gang may be targeting Chinese businesses out west 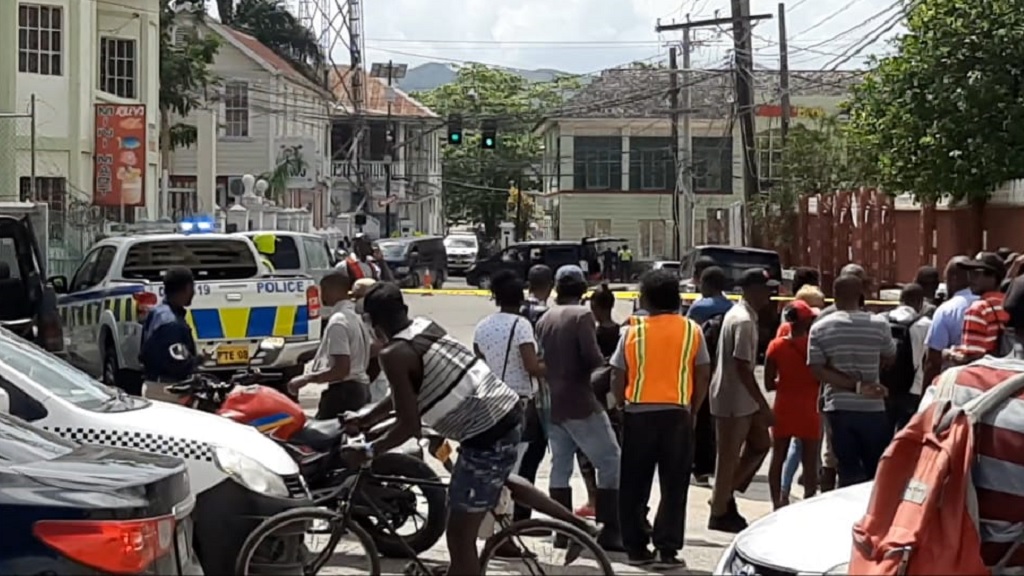 The scene of the recent robbery and murder of a Chinese businessman and a security guard in Montego Bay, St James.

Police investigators believe that a heavily-armed and well organised crime syndicate may be targeting Chinese-operated businesses in the western section of the island.

Late last month, for example, a group of armed men carried out a major robbery of a Chinese-operated supermarket in Duncans, Trelawny. Reports from the police were that shortly after 8.30 am, the supermarket owner was opening the establishment when a car pulled up at the front of the premises.

Four men armed with handguns jumped out of the vehicle and entered the supermarket.

They held the occupants at gunpoint and proceeded to rob the proprietor and customers of cash, cigarettes, phone cards and other items valued at close to $1 million, before escaping in the vehicle.

Detectives theorised that the same four men were the heavily-armed robbers responsible for the double murder and robbery of a popular Chinese businessman and a security guard in Montego Bay, St James a few weeks before.

And since then, a Chinese-operated business in Falmouth, Trelawny, was targeted and also robbed of both cash and goods.

In light of the seeming uptick in robberies against Chinese businesses, Robert Hew, President of the Chinese Benevolent Association, has recommended that members of the larger business community, not just Chinese business owners, take more stringent precautions to secure their business operations.

“We are concerned so we have recommended not just to our members, but anyone in the business community, to take precautions when transporting money,” Hew told Loop News.

“It makes sense that as a business person you hire a security company rather than attempt a do-it-yourself approach. All Jamaican businessmen - not just those in the Chinese community — need to take those kinds of precautions, especially when local criminals in a certain area may believe you are an easier target."

In the recent high-profile daylight robbery and murder, two men, one of whom was a popular Montego Bay businessman, were gunned down outside a bank in the city.

The police reported that about 11 am, just as Li, who operated a supermarket in Montego Bay, arrived at a bank on Church Street in a minibus he was driving, a man alighted from a Toyota Fielder motorcar that was driven up, and accosted the businessman.

Li was in the process of driving away when the occupants of the motorcar started to spray his vehicle with gunshots.

Li and Reid received multiple gunshot wounds and died in the bullet-riddled bus.

The police have launched probes to track down the perpetrators of those crimes.

Hew said that there have been several sensitisation meetings with security companies, consultants, closed circuit camera personnel and the police to explore various security options.

“It is up to the individual to make those choices,” Hew said.

Chinese businessman robbed of over $8 million