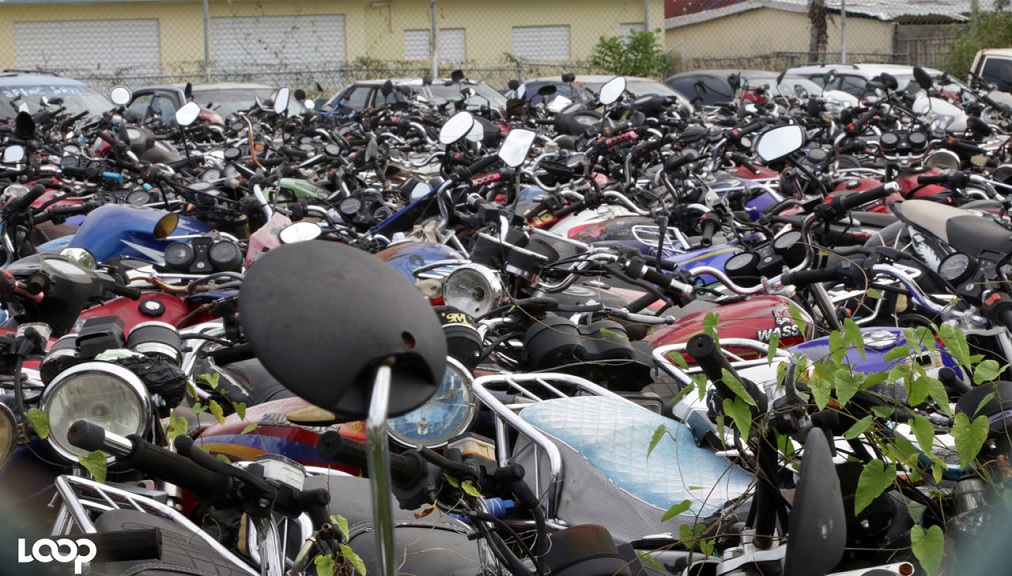 At least three motorcyclists have described as "silly" and "impractical", a petition that has been launched calling for the Government to ban the popular and relatively affordable ‘Yeng Yeng’ motorbikes.

At the same time, the Yeng Yeng operators said they understood the concerns from the general public about the noise from the units and the illicit activities, including murder and robberies, that some riders engage in with the use of the bikes.

But they remain adamant that a widespread ban of the units should not be entertained, adding that the relevant authorities should instead focus on implementing measures to arrest Yeng Yeng motorcycle drivers who break the law.

Among other things, the petitioner argued that law-abiding citizens fear the motorcycles not due to the noise levels from the units, but because of the emerging use of them in criminal activities, including robberies and drive-by shootings.

The petition calling for the ban of the units was created on Wednesday of last week on the Jamaica House Petition portal, which allows persons to bring issues of concern to the attention of the Office of the Prime Minister (OPM).

For Andre Williams who resides in St Ann, where Yeng Yeng motorbikes are a popular mode of transportation for young men due to the low cost associated with operating the units, he claimed that he purchased that type of bike not to engage in criminal acts or to breach the island's Noise Abatement Act.

"Bus and taxi fare would ah kill mi from where mi leave to get to work. So rather than ah spend out mi likkle pay on fare, mi just invest in a cheap Yeng Yeng fi work," he indicated.

"Mi anuh tief or gunman; nah go use my bike fi dat. So it silly fi just get up and say yuh ago ban Yeng Yeng. Ah nuh everybody a use it fi evil. Mi use it fi good. So banning dem nuh practical. (The ban) nuh mek sense," Williams, a 27-year-old pump attendant, added.

While stating that he empathised with the persons who are affected by the use of the units, he remained rooted in his stance that a wide ban of such motor vehicles is impractical.

Another operator of a Yeng Yeng bike, who only identified himself as ‘Wayne’, described the call for a ban of the bikes as "nonsense".

Wayne, who said he is a farmer in his fifties, argued that the Yeng Yeng motorcycles are not to be blamed for criminal acts, but rather, the operators who buy them for those purposes.

He further posited that the Government should find meaningful ways to prevent persons with criminal backgrounds from purchasing the units.

"Suh Andrew Holness and him Government have to find some good ways fi prevent dem from buy di bike. Dat ago hard fi duh. Mi know dat, but him and di police commissioner haffi work it out. But Yeng Yeng a poor yute ride. Can't ban it," Wayne contended.

Reports are that two of the men jumped from the motorcycles and brandished firearms, with which they opened gunfire.

Hunter ran into a lane nearby, while Martell ran into her yard.

Both women were chased by the gunmen who continued firing at them.

They were both shot and injured and later died at hospital.

That incident was just one of several criminal acts this year in the Corporate Area, in which motorcycles have been a main feature in aiding hoodlums to swiftly carry out their nefarious crimes and make speedy getaways.

On Independence Day, August 6, for example, gunmen travelling on a motorcycle struck in West Kingston, killing a 38-year-old man and injuring two other persons.

In July of this year, criminals travelling on motorcycles created havoc in sections of the Corporate Area especially, robbing mainly women after they had completed financial transactions.

A 25-second video of the incident showed a man walking into a driveway and snatching a woman's handbag. He then made his escape on a waiting motorcycle.

A few weeks earlier, a similar robbery that occurred in Lane Plaza, Liguanea, was also caught on CCTV. In that incident, a woman walking in the carpark at the plaza was forcefully robbed of her bag by a man who also escaped on a waiting motorbike.

Another robbery in St Andrew which was partially captured on camera, was of a group of men on motorbikes who reportedly followed a motorist home and struck before departing the scene.

Meanwhile, in relation to noise created by such Yeng Yeng motorbikes, Wayne said he is aware of the fact that the units are nuisances to especially elderly residents of rural Jamaica.

He explained that the noise is caused by the cutting of the mufflers or the removal of the silencer from the motorcycles’ exhaust systems.

The silencer is a device used to reduce the noise from the engine, but motorcyclists often remove it to allow for loud revving of their units.

According to Wayne, "Some yutes will get the Yeng Yeng (motorbikes) dem wid di silencer and tek dem out, or dem cut the muffler fi get di noise deh. Yea, it really annoy people and all mi can say is police fi duh dem work and lock up who ah create excessive noise."

He added: "Years mi a ride (drive) bike and mi nuh cut mine (muffler). Some man say a di noise give dem a hype when dem a ride (drive), especially when yuh have a ‘catty’ (a female) on the back (of the motorcycle), but it nuh matter mi still."

While speaking at the National Road Safety Council (NRSC) Motorcycle Outreach and Training Programme at Petersfield Vocational Training Centre in Westmoreland last month, Director of the Road Safety Unit (RSU) in the Ministry of Transport and Mining, Kenute Hare, cautioned motorcyclists against removing the silencers from their motorcycle exhaust systems. He said doing so could result in hearing loss.

"If you remove the silencer from your exhaust, that is a recipe for disaster; deafness is a must. Many motorcyclists are suffering today because poor seeds were sown.

“Put your money down to buy hearing aids, and rest assured that the shops do not sell eardrums. Use wisdom. If you took out the silencers, put them back now," Hare advised.

In November of last year, Minister of Transport and Mining, Robert Montague, advised the House of Representatives that the Island Traffic Authority (ITA) would be taking steps to reduce the noise from modified exhaust systems on some motor vehicles, including motorcycles, according to media reports.

An exhaust system is usually piping used to guide reaction exhaust gases away from a controlled combustion inside an engine.

Mufflers are used to reduce the sound waves coming out of an exhaust, without restricting the flow of exhaust gases. However, some drivers, including motorcyclists who are the main perpetrators, modify the systems to give off loud, often frightening sounds, which plague citizens island-wide.

Montague explained to Parliament last year that, while the ITA cannot prevent the modification of the exhaust system on motorcycles and motorcars, it would curtail/impact the number of those modified vehicles on the roads.

He said the ITA would do so by firstly "withholding the certification of fitness", and elaborated that "Whenever a motor vehicle is examined and a modified exhaust system is detected, the owner of the vehicle will be asked to rectify this before a certificate of fitness is issued."

Additionally, the ITA has been charged to remove registration plates from motorcycles and other motor vehicles whenever a modified exhaust system is identified within the units.

"These (registration plates) will be returned only when the vehicle is presented at an examination depot with the problem rectified," Montague said at the time.

While those planned actions relative to noise caused by motor vehicles were outlined last year, Yeng Yeng motorbikes continue to pollute the air across the island with their loud, raucous sounds, infiltrating the eardrums of annoyed citizens.

Another Yeng Yeng bike operator who spoke to Loop News on condition of anonymity, admitted that he deliberately adjusted his unit to make it louder.

The reason for doing so, he said, was for what he termed as the "hype" and "rush".

"Mi know it wrong weh mi duh to it (the motorbike)," he said jokingly.

In continuing, he said: "But when it (the Yeng Yeng motor bike) loud and yah drive, it just have a rush and it mek yuh feel hype. Yuh fren bike dem loud, so yours haffi loud to. A just fun ting man. Nah harm nobody."

When asked if he did not fear the potential damage to his hearing that the loud noise could cause in the future, the young motorcyclist responded: "Mi just a enjoy mi young days. Nah too pree dat".

Asked whether he thought Yeng Yeng motorcycles should be banned, the young rural area youth found the question to be comical.

"Dat (the ban) impractical," he said, after recovering from a few bouts of laughter.

Up to Saturday night, the petition calling for the ban of the particular bikes had received 1,527 signatures or 10.18 per cent of the 15,000 signatures that are required for the petition to be considered by the Government.

"Law-abiding citizens of this great country are in constant fear whenever they hear the antagonising noise of these nuisance (Yeng Yeng motorbikes) approaching,” stated the petition.

“They're not fearful of the noise of these bikes, but the mere fact that these motorcycles are used also for criminal activities (robberies, drive-by shooting etc)," the document continued.

"Coupled with that, the users of these motorcycles continue to cost taxpayers dearly due to the large volume of accidents associated with the vehicles and the resulting high hospital bills to treat victims.

"We're today urging the Government to listen to the call of the citizens and ban these motorcycles to save lives, properties and save money," the petition concluded.

Under the rules, a petition has to obtain 15,000 signatures within 40 days for it to be reviewed by the OPM.

The Jamaica House Petition portal gives citizens the opportunity to petition the Government on matters of national importance. The OPM will consider petitions submitted by local groups and members of the public as part of its national consultation approach, once the petitions meet the required criteria.

If a petition has met the agreed standards, the OPM will issue an official response.