Russell's 50 not enough as Tallawahs lose again to Knight Riders 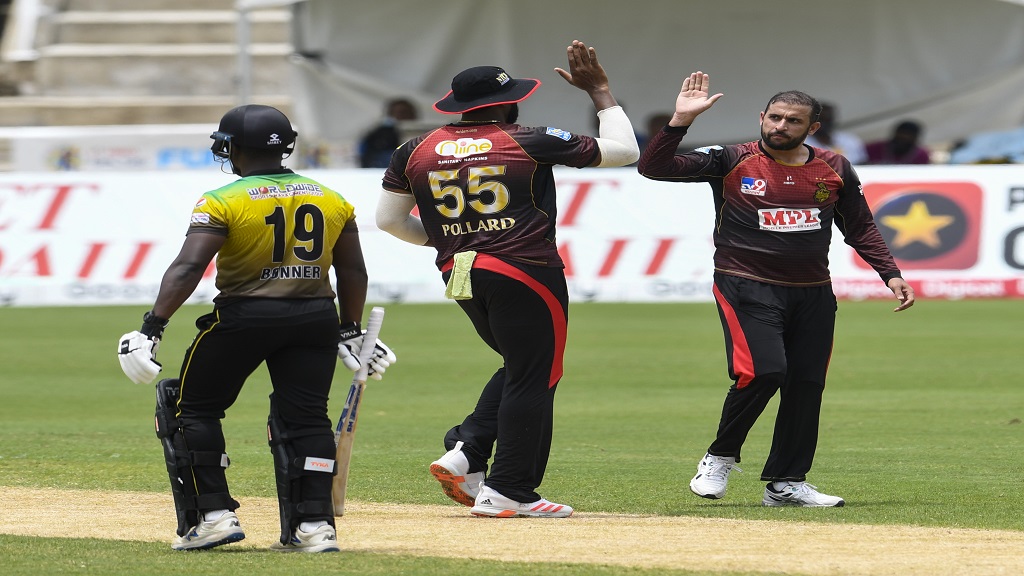 Andre Russell hit 50 from 23 balls but it wasn't enough as the Jamaica Tallawahs lost by 19 runs to Trinibago Knight Riders in the 21st match of the 2020 Hero Caribbean Premier League (CPL), at the Brian Lara Cricket Academy, on Tuesday.

Russell, who came to the crease in the 13th over with the Tallawahs on 84 for four and needing 101 more runs to get to the victory target of 185, was left with far too much to do. It was the second defeat for the Tallawahs against the Knight Riders in this season's competition as on August 20 the Rovman Powell-captained team went down by seven wickets.

The victory represents the seventh straight win for the Knight Riders as they moved to maximum 14 points to maintain their four-point lead atop the table ahead of second-place St Lucia Zouks. The Tallawahs slipped to fourth place with six points, the same as third-place Guyans Amazon Warriors.

Captain Kieron Pollard (33 not out) and Colin Munro (65) smashed 71 off the last five overs to get the Knight Riders up to a competitive 184 for four from their allotted 20 overs after they were sent in to bat.

Sunil Narine returned with a bang, hitting two fours off Fidel Edwards and top-edging for six to take 17 off the first over, then he plundered Carlos Brathwaite for three fours in a row. Brathwaite recovered to take Narine’s wicket, but the all-rounder’s 29 off 11 had sent the Knight Riders flying out of the blocks.

Munro should have fallen for just four, but Jermaine Blackwood dropped a simple catch. While Lendl Simmons smashed Edwards for a six over square leg, Mujeeb Ur Rahman was miserly as ever and it was largely thanks to Narine that the Knight Riders managed 49 for one off the powerplay.

Munro found the fence twice off Tallawahs captain Rovman Powell, and while Sandeep Lamichhane proved unhittable, Powell’s second over released the pressure, going for 14 including multiple extras. Lamichhane showed his class, dismissing Simmons for 25 with a leg-break that drew a top-edged hack to point. Munro inside-edged past the keeper to take the Knight Riders to 83 for two at the halfway stage.

Munro edged for four again off Powell, but was bamboozled by Lamichhane and was lucky to survive. Brathwaite bowled a tidy over, and while Tim Seifert managed to reverse sweep Lamichhane for four, that was the only boundary the Nepali conceded all day. After 14 overs, the Knight Riders were 105 for two.

Seifert smote Edwards over his head for six then next ball slashed to Lamichhane at third man. But Munro got two reverse-sweeps away for four in a row off Mujeeb, and Powell was too predictable as Munro was able to adjust and swing a six then a four over midwicket to take himself to 50. An over studded with extras went for 18.

Pollard levered a near-yorker for six then pulled for four off Mujeeb, and Edwards twice paid for missing his yorker, Pollard dispatching a full toss for a six and Munro smoking a half-volley for four. Brathwaite got the daunting task of bowling the 20th, and Pollard heaped the pressure on with a six. Munro pulled for four, and while Brathwaite closed the innings with a caught-and-bowled to dismiss the batsman for 65, the damage was done.

Chadwick Walton’s difficult CPL season continued as he slashed the first ball of the innings to point, giving Akeal Hosein a dream start. While Blackwood started brightly, Khary Pierre bowled him for 12 as he attempted to sweep, reducing the Tallawahs to 14 for two in the second over.

The Knight Riders were on top, so much so Pollard put himself at short leg for Narine, who went for just two. Akeal Hosein returned and went for just six, and off the powerplay, the Tallawahs had stuttered to 35 for two with the in-form Glenn Phillips facing just nine balls.

The nine runs that came off Narine’s second was largely due to poor fielding, but Phillips’s six off Fawad Ahmed was a fine hit. Phillips also cut Dwayne Bravo for four as two overs in a row went for double figures, but Pierre returned with a tight over, and at halfway the Tallawahs were 70 for two and needed 11.50 an over.

Phillips hit another six off Fawad, but Nkrumah Bonner had slowed almost to a crawl before falling LBW in the same over for 26 off 30 balls. Powell made little impact before being bowled by a Fawad googly for two, and so when Russell came to the crease the Tallawahs were 84 for four in the 13th and needed over 13 an over.

Dwayne Bravo chose an off-side heavy field to restrict Russell. But it was the well-set Phillips who fell, slicing high in the air to give Seifert a simple catch. Phillips made 41 from 31 balls. When Narine produced a good caught-and-bowled to dismiss Asif Ali for seven, Russell found himself with Brathwaite for recognised company and a required run rate above 15.

Brathwaite clipped for four when Dwayne Bravo strayed onto his pads, but was lucky not to find a fielder when he sliced a drive high in the air. Brathwaite guided a four and Russell clubbed a six off Narine’s last over, but the Tallawahs still needed 68 off the last 18 balls.

Brathwaite and Russell targeted Jayden Seales, and though one of Russell’s fours should have been caught by Simmons at cover, a 22-run over just about kept the Tallawahs in the game. But while Russell took Dwayne Bravo for four through the off-side and was dropped by Seales at backward point, he couldn’t manage another boundary and with 38 needed off the last over, the jig was up.

Pollard brought himself on to close out the game, and all a frustrated Russell was able to do was to limit the net run-rate damage with a few mighty blows as the Tallawahs finished on 165 for six, chasing the Knight Riders' 184 for four.

Russell hammered five fours and four sixes from his 50 not out, while Brathwaite had two fours and a six in his 21 not out from 16 balls.