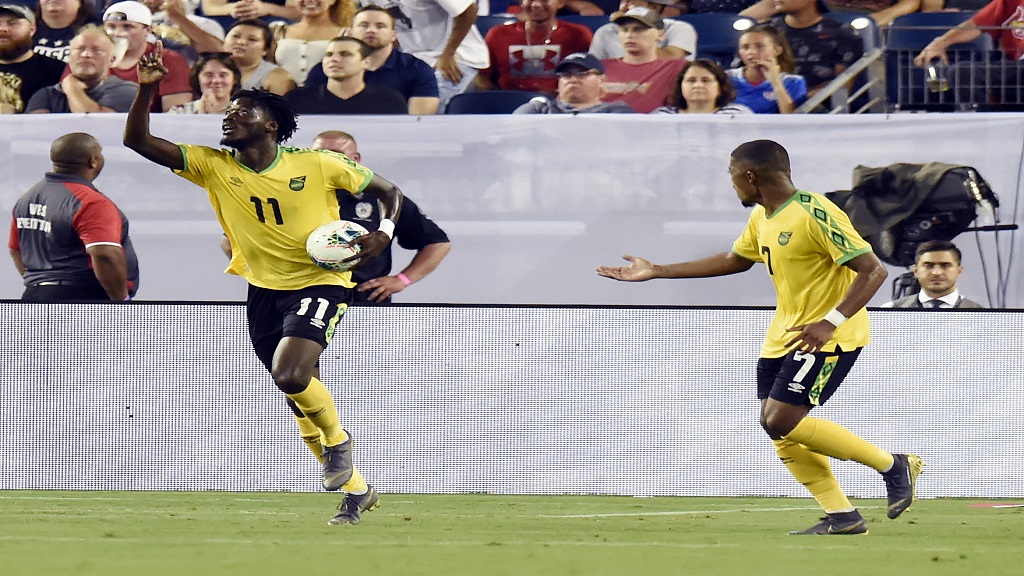 Jamaica forward Shamar Nicholson (11) celebrates after scoring a goal against the United States during the second half of their Concacaf Gold Cup semifinal football match on Wednesday, July 3, 2019, in Nashville, Tenn. The United States won 3-1.

Jamaica's Reggae Boyz were drawn to play Costa Rica, Suriname and either Bahamas, Guadeloupe, Guatemala or Guyana in the group stage of next summer’s Concacaf Gold Cup, a tournament many top players are likely to skip.

The Confederation of North American and Caribbean Football Association Football (Conacaf) held its first draw for the tournament Monday night rather than its past practice of announcing the group stage matchups.

The tournament originally was scheduled for July 2-25 but was pushed back to July 10 to August 1, with three nations to advance from a preliminary round on July 2-6. Many top Europe-based players from Concacaf nations will have reported to their clubs for preseason by the knockout stage and will not return to national teams until World Cup qualifiers during the international fixture window starting August 30.

Concacaf has not announced sites of the tournament.

Mexico are defending champion. Qatar, the Asian Cup champion and host of the 2022 World Cup, is an invited guest.

“I know that many communities in our region are going through challenging times and the thoughts of everyone at Concacaf are with them. I hope tonight’s draw provided some anticipation for the fans, a chance to remember great Gold Cup moments of the past and to talk about football with friends and family,” said Concacaf President and FIFA Vice President, Victor Montagliani.

“It was a great event that delivered exciting match-ups to look forward to, both for the Prelims and the Group Stage. I particularly enjoyed seeing the reaction of the head coaches live as it really added to the occasion and set the scene for next year’s tournament.

“We expanded last year’s Gold Cup and it was a huge success in showcasing outstanding football from our region. We want to build on that for the 2021 edition and believe the introduction of the Prelims and an exciting new format for the Knockout Stage will provide a great spectacle next year,” added Montagliani.

The 2021 Gold Cup will begin on July 2, 2021, with a Preliminary Round (Prelims) which will include12 Concacaf Member Associations competing for the final three spots in the 16-team Group Stage. For the two-round Prelims, the participating national teams have been divided into six matchups and will play as follows:

The Group Stage of the 2021 Concacaf Gold Cup will kick off on July 10, 2021. The 12 Concacaf national teams, which qualified directly through their performances in the Concacaf Nations League group stage, the guest participant, AFC Asian Cup Champions Qatar, and the three Prelims winners have been divided into four groups and will play as follows:

Andre Blake on 2017 Gold Cup: One of the best moments of my career