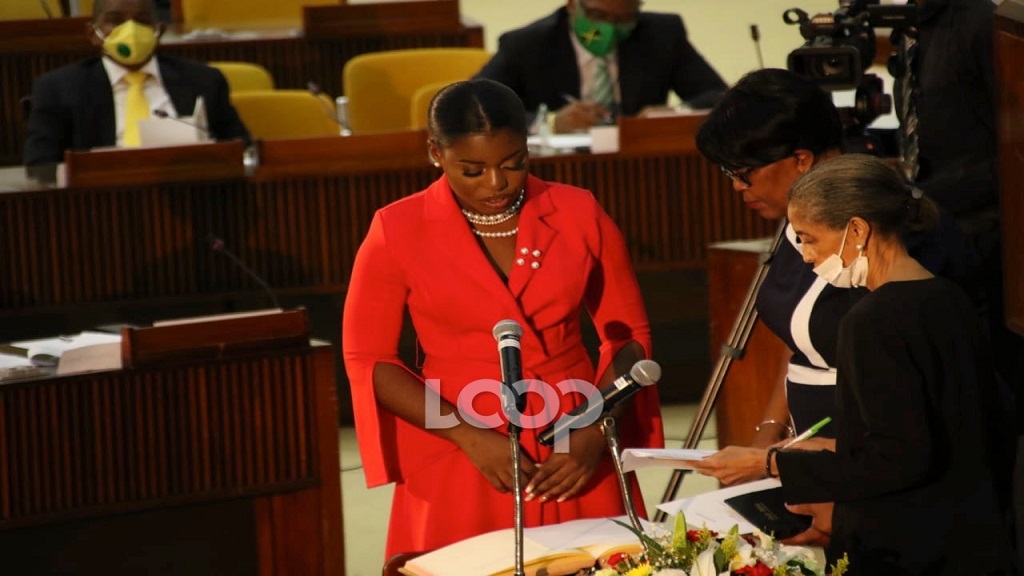 Gabriella Morris being sworn in as Opposition Senator at the Jamaica Conference Centre on Tuesday.

A record 38 per cent of the 21 Senators who were sworn in Tuesday during the ceremony to mark the start of the new parliamentary term are women, a fact noted by Leader of Government Business in the Senate, Kamina Johnson Smith.

“This is the largest percentage ever achieved in our history,” Johnson Smith commented.

The percentage of women on the Opposition side of the Senate is even more impressive as four of the eight are women. They include two newcomers in business development consultant Janice Allen and communications specialist Gabriella Morris. Two attorneys have returned. They are Donna Scott-Mottley who will again serve as Leader of Opposition Business in the Senate and Sophia Fraser-Binns.

On the government side, four of the 13 senators are women. They are Kamina Johnson Smith, the Minister of Foreign Affairs and Foreign Trade who will again serve as Leader of Government Business in the Senate; attorney-at-law Sherene Golding-Campbell, the daughter of former Prime Minister Bruce Golding, who was present to see her take the oath of office; Dr Saphire Longmore, who is returning, and Natalie-Campbell-Rodriques who failed in her bid to unseat Natalie Neita in the North Central St Catherine constituency in the September 3 General Election.

Meanwhile, Tom Tavares Finson, who was sworn in as Senate President for a second term has proposed that the library in the new Parliament building to be constructed at Heroes Circle be named after the late, former President of the Senate, Jeanette Grant-Woodham. An educator, Grant-Woodham served in the Senate from 1980-1989. She served as President from 1984-1989, the first female to hold the position.

“She was an educator par excellence, the founding principal of the Tivoli Gardens High School,” Tavares Finson noted. The senate also observed a minute’s silence as a mark of respect for the late educator.

Tavares-Finson’s proposal has already received the support of both Johnson Smith and Scott-Mottley.

For her part, Scott-Mottley signalled that the Opposition will be taking its role seriously, especially in light of the outcome of the general elections which saw the People’s National Party winning just 14 seats to the 49 taken by the Jamaica Labour Party.

“The work that we have to do here is extremely important…from our side, our role becomes even more important with our reduced numbers in that other place (House of Representatives),” Scott-Mottley noted.

“But the most important thing Mr President is that we be diligent, that we remember at all times that it is our duty not be partisan but to put at the forefront of our minds, the people of Jamaica whom we have pledged to serve, and we do so unreservedly,” Scott-Mottley added.

Tuesday’s swearing-in ceremony was held at the Jamaica Conference Centre to ensure proper social distancing protocols were observed in light of the ongoing COVID-19 pandemic and the fact that Gordon House on Duke Street where the Parliament normally meets could not safely accommodate the parliamentarians, staff, visitors and members of the media who attended the ceremony.

Those in attendance wore masks and hand sanitisation stations were set up. Some parliamentarians opted to take their own pens to sign the book after taking the oath of office.

Of note is that for the most part during the swearing-in ceremony for senators, Clerk of the Houses of Parliament, Heather Cooke wore her mask below her chin while senators read the oath of office in close proximity to her. The deputy clerk, Valerie Curtis had her mask on for part of the ceremony but it was removed before the ceremony was concluded.

Both Cooke and Curtis kept their masks on when the 63 Members of Parliament were sworn in later.