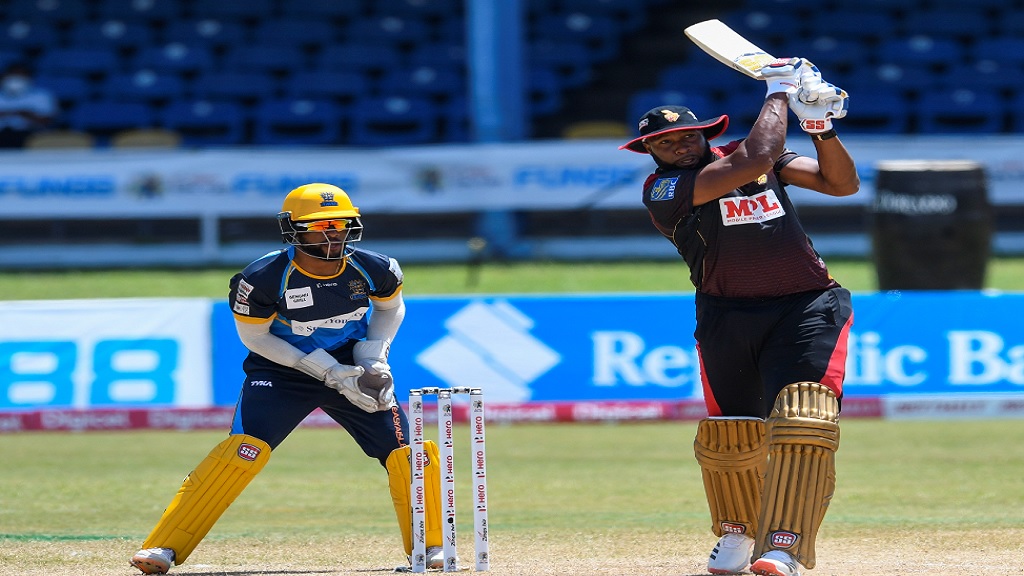 Trinbago Knight Riders came from a difficult position to pull off a two-wicket victory over defending champions Barbados Tridents, in the 17th match of the 2020 Caribbean Premier League (CPL), on a slow Queen's Park Oval pitch on Saturday.

The win made it six for six for the Knight Riders who secure two points to create further distance between them and the rest of the CPL field. They are on 12 points, four clear of second-place St Lucia Zouks in the six-team table. Third-place Barbados Tridents, fourth-place Guyana Amazon Warriors and fifth-place Jamaica Tallawahs are all locked on four points. St Kitts and Nevis Patriots are bottom of the table on two points.

Captain Kieron Pollard set up the victory for the Knight Riders with 72 runs from 28 balls in Port-of-Spain, Trinidad and Tobago.

When Pollard walked to the crease with 87 runs needed from 44 balls, with five wickets in hand, the Knight Riders were facing their first defeat of the season in their chase of a victory target of 149.

Soon after the arrival of Pollard, Lendl Simmons was dismissed for 32 off 29 balls in the 15th over. After the 16th over, the Knight Riders were in deep trouble, needing 62 off 24 balls.

Pollard smashed nine sixes in his 72 off 28 balls before he was run out in the 19th over, and though Khary Pierre still had work to do to finish the job, it was the Knight Riders captain who made the game his own.

Earlier, the Knight Riders elected to field first after winning the toss. Johnson Charles started aggressively, cutting Akeal Hosein and whipping Pierre for four then lofting Hosein for six. But Hosein struck in his second over, Shai Hope caught at slip for four trying to cut a quicker ball, just before rain briefly held things up.

Charles took another boundary off Hosein, taking the Tridents to 37 for one off the powerplay. Fawad Ahmed and Pollard kept Kyle Mayers quiet, but Charles swept well off Fawad, paddling for four and lofting for six. At the halfway stage, Charles had 44 of the Tridents’ 59 for one.

Pollard gave Tion Webster his first T20 over, and while Webster started well it eventually went for nine. Mayers sent a Jayden Seales full toss for six, but Charles then steered another full toss straight to point and was caught for 47 off 37 balls.

Pierre could have dismissed Tridents captain Jason Holder, but Webster dropped a low chance at long-off. Mayers finally got hold of Fawad for a pulled four, and after 14 overs the Tridents were 92 for two. Hosein though recovered from Sikandar Raza dropping a simple catch off Mayers to bowl Holder for three as he tried to launch him over midwicket.

Mayers and Corey Anderson scrambled eight off Pollard, but Raza deceived both with drift and turn. Mayers was caught at long-off for 42 and Anderson was stumped by wicketkeeper Tim Seifert for six to leave the Tridents on 107 for five in the 17th over.

Ashley Nurse and Rashid Khan responded emphatically. Nurse swept then cut Raza for four to get off the mark, and Rashid smacked Fawad for four then pulled him for a six. Fawad though recovered to dismiss Rashid for 12, Raza taking a diving catch at cover.

Nurse brilliantly manoeuvred a Seales yorker over point for six, but then a pull went high rather than long and Seifer held the skier to dismiss the batsman for 19.

Pollard gave himself the 20th, and Mitchell Santner pulled him for a wonderful six. The captain recovered to go for just singles off the rest, but the Tridents had a what looked a good score of 147 for seven on the board

At the start of the Knight Riders chase, Webster drilled Mitchell Santner for four to get off the mark, but Holder’s extra bounce got rid of him. Webster was caught at mid-on for five and Holder also got rid of the dangerous Colin Munro, who edged a cut to Nurse at slip and was dismissed without scoring to leave the Knight Riders at  6 for two after two overs.

The Tridents went to the off-spin of Nurse to target the left-handed Darren Bravo, but the right-handed Simmons got himself on strike and hammered two contrasting sixes - the first got barely head high, the second almost cleared the stand.

Holder called on Rashid, and the Afghan answered with a wicket-maiden. Darren Bravo survived an LBW shout playing forward but then fell in that manner playing back. Darren Bravo went for six off 12 balls. The Knight Riders had stumbled to 27 for three off the powerplay.

Hayden Walsh Jr started nicely, and Raymon Reifer struck with a cutter that Seifert edged to the keeper and was out for four. Hosein guided a four past third man, but at 48 for four, the Knight Riders were well behind the game at the halfway stage.

Santner conceded just two, nearly having Hosein stumped twice. Off the returning Rashid, Simmons barely cleared deep midwicket with a sweep and Hosein was lucky his loft didn’t carry to long-on. But the luck did not last, as Hosein, on 12,  sliced a Walsh Jr googly far enough for Holder to take low at long-off. Thus, when Pollard strode to the middle, his team was in trouble needing 87 runs needed from 44.

The captain served notice of what was to come, launching Walsh into the scoreboard first ball. Holder brought back Rashid, but Pollard attacked him too, hammering a flat six over long-off. Simmons then ran past one to give Hope an easy stumping off Santner. Rashid gave away only four off his last over, and with four overs left the Knight Riders needed 66.

Amid sending Walsh Jr to all parts of the Queen’s Park Oval for four sixes in one game-turning over, Pollard turned down a single, and next over Raza sacrificed himself to ensure he was run out and Pollard regained strike. Reifer started the 18th well, but Pollard somehow managed two fours.

The Knight Riders still needed 31 off 12, but Pollard punished Holder for missing his yorker with two brutal sixes. Reifer got the nod for the 20th, with 15 to defend, and Pollard again started with a six. Holder appeared to have swung the game back the Tridents’ way, running out Pollard as he desperately sought a second, but Reifer’s length deserted him and Pierre kept his cool, levering a full toss over point for a score-levelling six.

The Tridents were done, and the winning runs came next ball with a slice past third man. Pierre was unbeaten on 10 at the end, while Seales was on one not out.

The Knight Riders secured the victory without Sunil Narine and Dwayne Bravo.