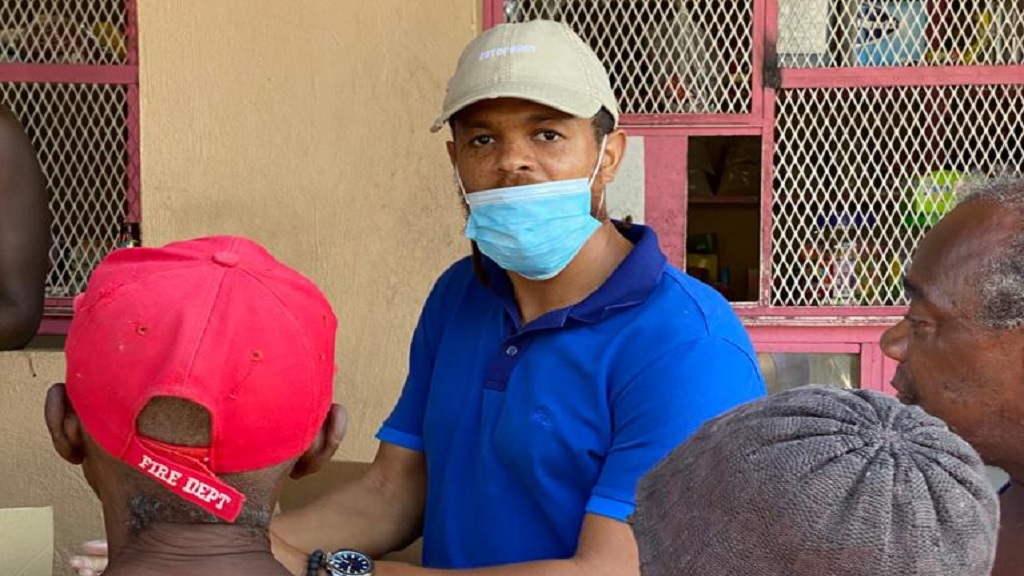 Panic handing out sanitisers in the Corporate Area recently.

As the country braces for a major public health crisis triggered by the COVID-19 outbreak, reggae singer Panic is on the front-lines, helping the impoverished to fight the disease by handing out boxes of hand sanitiser.

"I wanted to do this particular gesture because, with limited resources, when someone has to make a choice between whether to eat or be healthy, that is a choice that is crazy...  so if we can stop one person from getting infected or transmitting the disease, then we are OK with that," Panic said.

He gave away 200 boxes of hand sanitiser gel to several residents by reaching out to sponsors like AutoMania who helped to provide the much-needed goods to depressed communities of Cassia Park and Cockburn Pen in Olympic Gardens last week.

"I used to run up and down on the banks of Verene Avenue when I used to live at Cassia Park, and people still a go through hardships, youths get older and the same thing a gwaan, so the place have some sentiment to me," he said.

Panic has also started to give out $500 phone cards via his social media pages to Jamaicans who want to stay connected online to get updates on the spreading threat of COVID-19.

"It is important that people have access to the Internet at this time to keep informed. I have reached out to a few other corporate sponsors, and I want to do a bigger exercise giving out hand sanitiser and other goods in Spanish Town in the near future," he said

Panic first jumped into the spotlight with 'Nah Go Change', which generated a buzz online and on the nation's airwaves. He has followed up that effort with a pair of songs that he released earlier this month on his Panic Muzik label.

On the first single, Panic brings his millennial flow and singalong hooks to ‘Game of Life’, a song that drops a positive message about surviving the pitfalls of life. On the other single,  ‘Up Early’, Panic captures the grit and urban realism of Jamaican life with confidence and controversial hard hitting lyrics.