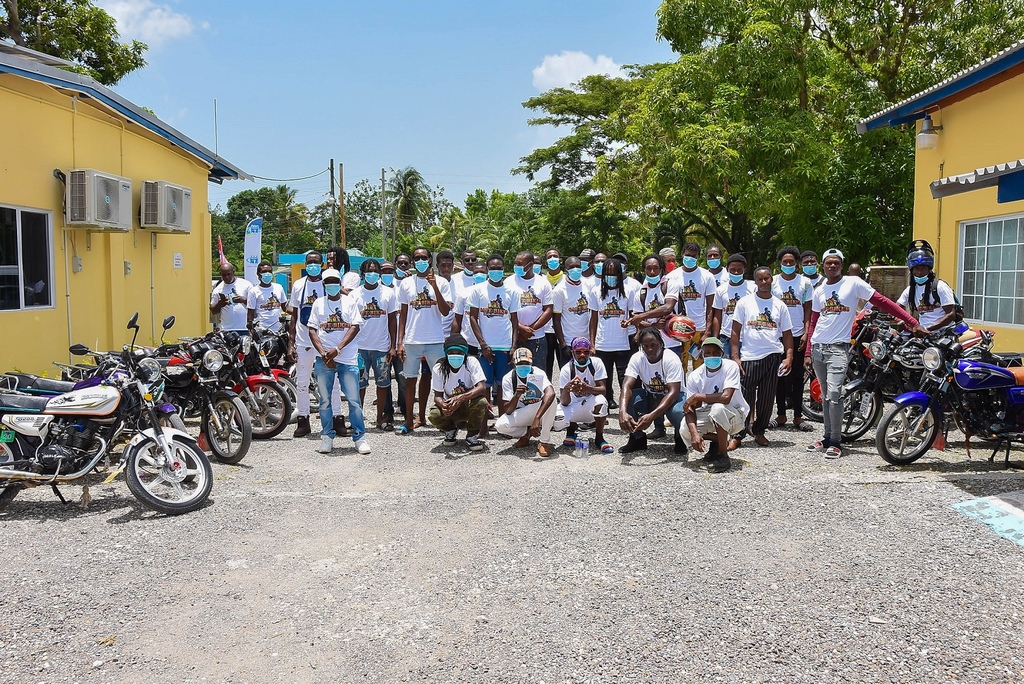 Troy Rose fidgeted in his spot, his eyes intense, and his voice noticeably lowered a few octaves from his hearty laughter that rang out in the afternoon air just seconds earlier. The painful story he was about to relate has been permeating his mind the past two weeks, as a poignant reminder of the fragility of life as a motorcyclist.

In the blink of an eye, his best friend’s life was snuffed out when his motorcycle slammed into a truck as he maneuvered an improper overtaking.

A pillion passenger on the back of the motorcycle sustained numerous injuries and was rushed to hospital, but his long-time friend was gone. “The suicide riding is not necessary,” said Rose, a resident of Waterworks, Westmoreland as he reflected on the crash.

“I’ve been riding for over 19 years, and been in a few crashes because of no fault of my own but thankfully it was never anything to take my life. A me say safe travel pon di gravel, remember seh bike nuh done mek yet.”

A chef by profession, Rose is one of 48 motorcyclists who turned out at the Petersfield Vocational Training Centre in Westmoreland on Sunday, August 9, for a Motorcycle Outreach and Training Programme organised by the National Road Safety Council (NRSC) in collaboration with its member organisations. The programme is funded by the Ministry of National Security, under the LivGud initiative, with support from HEART NSTA Trust.

The Ministry of National Security has also funded the construction and establishment of a new Motorcycle Training Facility at the Petersfield Vocational Training Centre which will be officially opened on Sunday.

An increasing number of motorcycles in the island has led to an uptick in road crashes and fatalities among motorcyclists, and this new sensitization and training programme is aimed at alleviating the problem by tackling the most affected parishes, Westmoreland, Hanover, St. James, and St. Elizabeth.

Under the slogan “I’m a safe biker – life matters”, the programme initially targeted 45 motorcyclists for training and sensitization workshops. However, the promotional push from the NRSC ramped up awareness for the event, and on launch day, the numbers quickly exceeded the full capacity of the training room and the space required for COVID-19 physical distancing restrictions. The excess turnout meant some motorcyclists were redirected and pre-registered for future sessions.

The two-part programme launched on Sunday, August 9 and wraps up on Sunday, August 16. It will provide crucial information on the road code, life-saving benefits of using protective gear, demonstrations on operating a motorcycle effectively, changing the culture of impaired motorcycle driving, and live testimonials from road crash victims.

Dianne McIntosh, Permanent Secretary, Ministry of National Security, said that the outreach and training programme is an important investment in protecting Jamaicans on the nation's roads. “We are investing in the resources and programmes to protect our most vulnerable road users. One fatality is one too many. These social intervention programmes are our way of showing that we’re serious about sustainable improvements in road safety. Now, it’s up to the motorcyclists to play their part.”

Western Jamaica accounts for 50 per cent of motorcyclist fatalities

Speaking at the event, Paula Fletcher, Executive Director of the NRSC said the western end of the island accounts for 50 per cent of the bikers who have died in Jamaica.

“Fifty per cent of those who die are your family, friends or neighbours and the majority of them, over 90 per cent were not wearing helmets. Who is next?” questioned Fletcher as she delivered a hard-hitting message to the participants. “It all depends on the choices you make. You are the ones who’ll determine if you live, if you don’t live, or if you live with debilitating injuries.

Inspector Gregory Hall, Sub-officer in charge of Traffic and Patrol, Westmoreland Division said indiscipline among motorcyclists has been the main challenge in the parish. The event, he said, is a welcome change in outreach.

“This is the first event of this form that I've seen. We have numerous other initiatives in an effort to curb the rate of collisions, especially fatal collisions among motorists. I’m impressed with the presentations, and I’m extremely optimistic of the end results.” he said. “Something different needed to be done to try to stem the rate at which motorcyclists are dying in Westmoreland and the western end of the island.”

As the day’s events came to a close on Sunday, 20 motorcyclists aced the practical cone maneuvers led by the expert Jamaica Constabulary Force motorcycle trainers. Each earned bragging rights among their peers, and can now proceed to the next steps in obtaining their motorcycle driver's license.

Welcome 20 per cent reduction in road fatality, but… - NRSC

NRSC proposing measures to reduce the number of motorbikes locally