With no school, calls drop but child abuse hasn’t amid virus 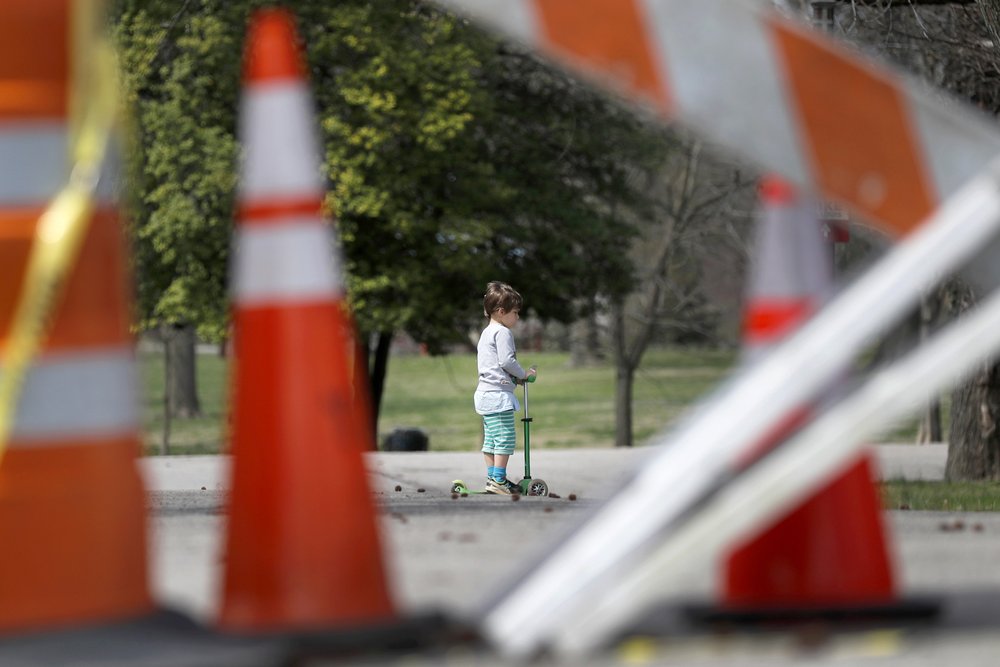 A child rides a scooter past barricades at an entrance to Tower Grove Park in St Louis, Missouri. The entrance to the park has been closed to vehicle traffic in an effort to give visitors on foot more room to practice social distancing and help slow the spread of the coronavirus. (AP Photo/Jeff Roberson)

With schools closed and teachers unable to report suspected cases of abuse and neglect, child welfare agencies have lost some of their best eyes and ears.

Indeed, it is during a stressful time for families who have lost jobs and are locked down together during the coronavirus pandemic.

Across the country, states are reporting fewer calls to child abuse hotlines, not because officials believe there are fewer cases but because they’re going unreported.

‘When there are large-scale job losses in communities, child maltreatment rates go up,’ said Anna Gassman-Pines.

She’s a Duke University public policy professor whose expertise includes the effect of unemployment on children.

‘So we all need to be thinking about, during this time of stay-at-home orders and widespread economic strain, that those are the conditions under which families with pre-existing vulnerabilities might be under — a lot of increased strain and stress.’

Calls to Washington State’s child abuse hotline are down about 50%, while Montana, Oklahoma and Louisiana are reporting about a 45% reduction since schools closed last month to slow the spread of the virus.

‘That means many children are suffering in silence,’ said Darren DaRonco, spokesman for the Arizona Department of Child Safety.

Agencies are now asking others to fill in the reporting gaps that have emerged with school closures.

‘Everyone, whether you’re a store clerk, a mailman, a neighbour or a relative, everyone has the responsibility of reporting child abuse,’ said New Hampshire Governor Chris Sununu, whose state has seen calls drop by half in recent weeks.

‘While calls have gone down, that doesn’t mean abuse has stopped.’

Ohio Governor Mike DeWine recently echoed that sentiment, saying ‘we do not have enough eyes on these children’ and asking ‘everyone else to try to be more vigilant’.

Moira O’Neill, director of New Hampshire’s Office of the Child Advocate, said people being stuck at home and losing their routines likely has increased stresses that contribute to child abuse.

These include economic insecurity and limited access to medical and mental health care.

Calls are increasing to domestic violence hotlines, an indication that some children may be trapped in unsafe homes, said Jill Cook, assistant director of the American School Counsellor Association in Virginia.

‘My concern is children for whom school was a safe space are now perhaps in environments where they really don’t have a lot of leverage to move or go outside or leave — that they’re in unsafe environments,’ Cook said.

In New Mexico, the Children, Youth and Families Department said it has a different approach.

It was reported that in New Mexico, there are ‘increasing communication with domestic violence shelters, youth shelters, hospitals, police, the Department of Health and other partners involved in keeping children safe.’

The decrease in calls is more than the typical drop seen during the summer break when agencies still receive reports from daycare providers or other community members who interact with children.

Now, ‘not only are they out of school, but they are isolated from everybody else,’ said Nikki Grossberg, deputy administrator of Montana’s Child and Family Services Division.

States are encouraging people to reach out to their extended families or others in their community if they are facing challenges that put children at higher risk of abuse and neglect, said Marti Vining, the Montana agency’s administrator.

Vining said families that are overwhelmed can call state hotlines to get referred for help with public assistance, possible child care and a plan to help them deal with stress.

‘The message that we want to get out is that the challenges that our families face, they’re not going to stop just because there’s a pandemic,’ Vining said.

‘It’s just really important that we all step up and do what we can to help support families that are maybe facing challenges.’

Parenting Monday: Tips to nurture your child during a pandemic