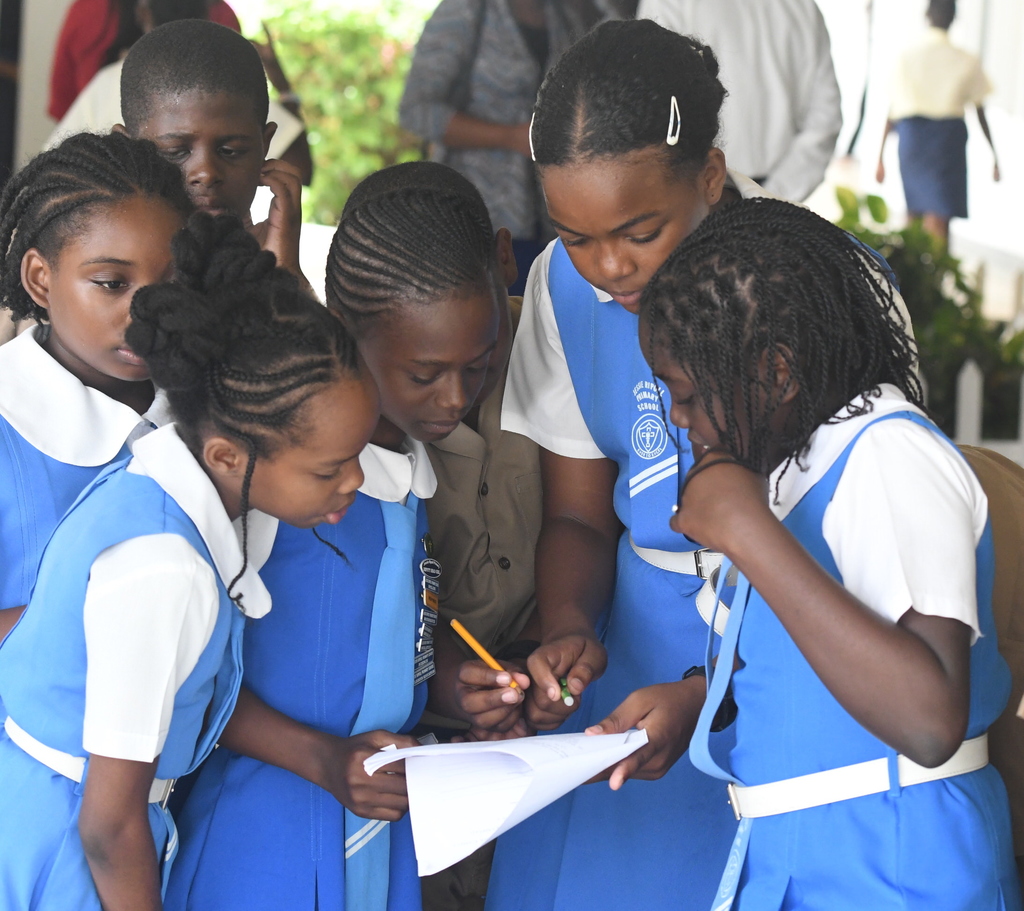 Students from Jessie Ripoll do final review of Math papers before sitting the second round in the Jamaica Mathematical Olympiad hosted by the Department of Mathematics at the UWI.

New Fortress Energy has announced its title sponsorship of the 10th staging of the Jamaica Mathematical Olympiad, held annually by the Department of Mathematics at the University of the West Indies, Mona.

The partnership sees New Fortress committing $1 million towards the Olympiad.

Speaking on their involvement in the Olympiad, Verona Carter, VP, Public Affairs, New Fortress Energy, said; “New Fortress Energy cultivated a longstanding and impactful relationship with the University of the West Indies, where we’ve partnered with the Faculty of Engineering on a number of initiatives such as engineering scholarships to top-performing students and LNG related curriculum. We’re delighted to be building on this relationship by supporting the Mathematical Olympiad that is being hosted by the Department of Mathematics.”

“Technology and mathematics play an integral role in helping economies build and sustain a strong and positive socioeconomic future. We are therefore excited about the Mathematical Olympiad for what it means for Jamaica’s future,” continued Carter.

Head of the Department of Mathematics at the UWI, Dr Nagarina Ponakala said: “We’re very excited about the 10th staging of the Mathematical Olympiad and we thank New Fortress Energy for coming on board as our first private sector title sponsor across both the Junior and Senior competitions.”

Ponakala said since the inception of the Olympiad over 10 years ago, the university has seen steady increases both in the interest and participation of the students and schools year on year.

Last year, over 5,000 students entered the qualifying round at the primary school level and over 2,000 entering at the high school level.

The educator described the showing was remarkable and encouraging.

“This tells us that Jamaica has a bright future. Mathematics is central to modern society; it’s a tool that is used by everyone, every day in some way, shape or form. It is fundamental to building Jamaica into a knowledge-based economy, and so we’re excited about the growth of the competition and for what it means for the future development of our country,” she added.

More than 8,500 prep and primary school students entered the qualifying round in the Junior Championship, which closed in January 2020.

Approximately 1,000 students will move on to the semi-final round on March 31 with the top 450 students advancing to the finals on May 19th.

Meanwhile, from a total of approximately 2,500 high school students who entered the qualifying round in the Senior Championship in December 2019, over 350 students advanced to the semi-finals, which were held at the UWI Mona and Montego Bay campuses respectively on February 22,

The finals will be held on March 21 at the Mona campus.

In addition to the individual winners, the three top performers will travel to Honduras to represent Jamaica in the CENTRO 2020 Regional Mathematical Olympiad.