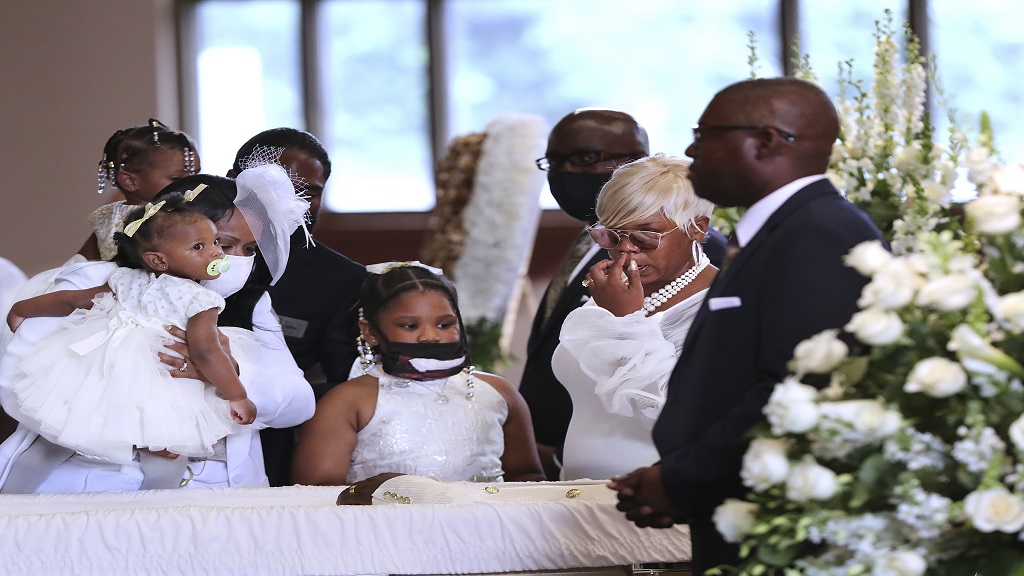 Tomika Miller, wife of Rayshard Brooks, and family members all dressed in white pause during the family processional at his funeral in Ebenezer Baptist Church on Tuesday, June 23, 2020 in Atlanta. Brooks, 27, died June 12 after being shot by an officer in a Wendy's parking lot. Brooks' death sparked protests in Atlanta and around the country. (Curtis Compton/Atlanta Journal-Constitution via AP, Pool)

Scores of mourners Tuesday paid their final respects to Rayshard Brooks at the Atlanta church where the Rev Martin Luther King Jr used to preach, taking part in a funeral rich with historical echoes and filled with a tragic sense that Black America has been through this all too many times before.

“Rayshard Brooks is the latest high-profile casualty in the struggle for justice and a battle for the soul of America. This is about him, but it is so much bigger than him,” the Rev Raphael Warnock, senior pastor at Ebenezer Baptist Church, told the crowd, less than two weeks after the Black man was shot twice in the back by a white Atlanta police officer following a struggle in a fast-food parking lot.

Warnock recited a long list of names of Black people who died at the hands of police in recent years, including Eric Garner, Michael Brown, Philando Castile and George Floyd, lamenting: “Sadly we’ve gotten too much practice at this.”

Brooks’ widow, Tomika Miller, dressed in white, sat surrounded by family and friends. Former state lawmaker Stacey Abrams and Atlanta Mayor Keisha Lance Bottoms, both of whom have been mentioned as potential running mates for Democratic presidential candidate Joe Biden, were among the mourners. 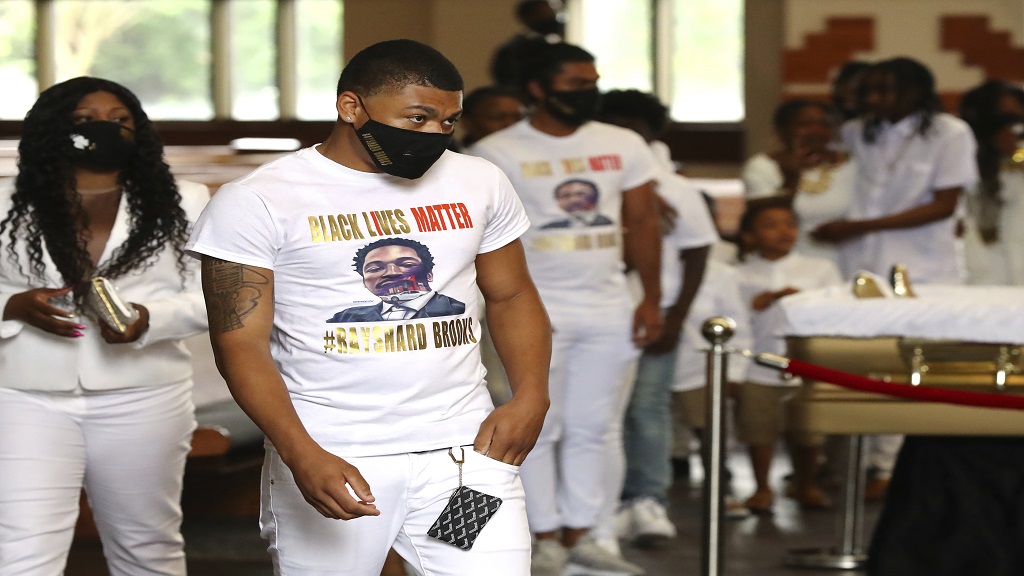 Family members and friends wear all white during a processional for the funeral of Rayshard Brooks at Ebenezer Baptist Church, Tuesday, June 23, 2020. (Curtis Compton/Atlanta Journal-Constitution via AP, Pool)

Most people dressed all in white, while some wore T-shirts with Brooks’ picture. Nearly everyone had masks on against the coronavirus.

Brooks' killing June 12 came amid weeks of turbulent and sometimes violent protests across the US over Floyd's death under a white Minneapolis officer's knee on May 25. Protesters have demanded changes in how officers are trained and disciplined and have called for the dismantling of police departments or the shifting of funding away from law enforcement toward social services.

“We are here because individuals continue to hide behind badges and trainings and policies and procedures rather than regarding the humanity of others in general and Black lives specifically,” the Rev Bernice King, the civil rights leader's daughter, told the crowd.

She noted ruefully that the killing took place in Atlanta, the “Black mecca" and “the city that is supposed to be `too busy to hate.'"

King, who was a child when her father was assassinated in 1968, told the mourners she was at the church for "what feels like an all-too-familiar moment.” She noted that Brooks' death took place on the same date that NAACP leader Medgar Evers was assassinated in Mississippi in 1963 and Nelson Mandela was sentenced to life in prison in South Africa in 1964.

But in a powerful echo of her father's “I Have a Dream” speech, she declared: “Rayshard Brooks’ death will not be in vain because justice will roll down like waters and righteousness like a mighty stream.”

Brooks, 27, was shot by Officer Garrett Rolfe after a struggle that erupted when police tried to handcuff him for being intoxicated behind the wheel of his car at a Wendy's drive-thru. Video showed Brooks snatching a police Taser and firing it at the officer while running away.

Rolfe, 27, was charged with murder and jailed without bail. A second officer, Devin Brosnan, 26, was charged with aggravated assault, accused of stepping on Brooks' shoulder as he lay dying on the pavement. Lawyers for both men said their clients’ actions were justified.

Atlanta's police chief stepped down less than 24 hours after Brooks' death, and the Wendy's was burned by protesters.

As Brooks' funeral was underway, authorities announced the arrest of a suspect in the burning of the restaurant, identifying her as 29-year-old Natalie White.

While Brooks was not a member of Ebenezer Baptist, the church is a "sanctuary for those who suffer,” Warnock said in a statement announcing the funeral plans. Actor and filmmaker Tyler Perry offered financial help for the service, Warnock said.

An afternoon bail hearing for Rolfe that would have conflicted with the funeral was canceled by a judge. Under the law, crime victims and their families are entitled to be heard at such proceedings.

Outside the church, a large screen broadcast the service. Tyrone Harvey was among the few dozen who listened.

Warnock, a Democrat running for the US Senate, urged people to keep marching and raising their voices to challenge racism and fight for change.

“I came here today to announce another march. I don’t want you to miss it. Make sure you show up for this march. It is happening on November 3, 2020, at a voting booth near you," he said to applause. "It’s a contradiction to march in the streets and not march on the voting booth.”

Meanwhile, a new poll that finds nearly all Americans favor at least some change to the nation’s criminal justice system, and they overwhelmingly want to see clear standards on when police officers may use force and consequences for those who cross the line.