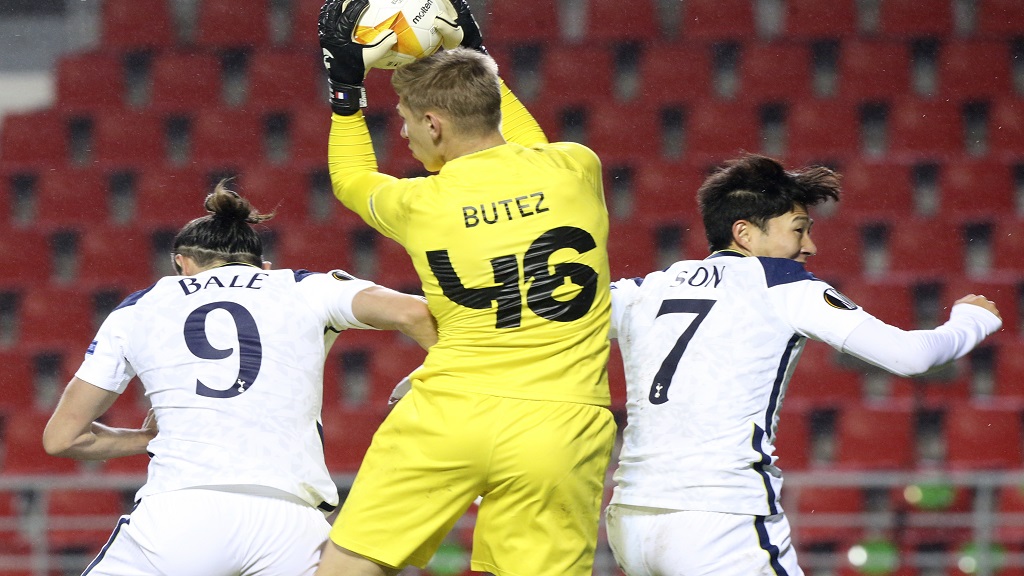 Royal Antwerp's goalkeeper Jean Butez, centre, goes up for a save while being challenged by Tottenham's Gareth Bale and Tottenham's Son Heung-min during their Europa League Group J football match at the Bosuil stadium in Antwerp, Belgium, Thursday, Oct. 29, 2020. (AP Photo/Francois Walschaerts).

Jose Mourinho says he wanted to make 11 changes at half-time in Tottenham's 1-0 Europa League defeat to Royal Antwerp, conceding that his side was deservedly beaten.

Giovani Lo Celso, Steven Bergwijn, Carlos Vinicius, and Dele Alli, making his first start in over a month, were all taken off at the interval with Tottenham trailing to Lior Refaelov's first-half strike.

Gareth Bale was next to make way on the hour-mark but the introduction of Pierre-Emile Hojbjerg, Erik Lamela, Lucas Moura, Son Heung-min, and Harry Kane made little difference.

And on the back of the chastening defeat in Belgium, Mourinho insists his fringe players can have no complaints about being overlooked for bigger matches.

"I would have liked to make 11," he said of his decision to make a quadruple change at the break. "I didn't make five because I was afraid of a long 45 minutes without any changes to make.

"There's only one person to blame, and it is me. I had chosen the players to start. At half-time, I tried to improve the situation. But it was not enough. The dynamic of the first half was there, the mentality was there and it's difficult to change.

"In the first half, the game was very easy to play, lots of space. In the second half, we improved but then they played in a completely different way. It was very difficult. In the end, Antwerp got what they deserved and we also got what we deserved.

"It's a fair result. I'm always calm with it. The best team won and the worst team lost."

Mourinho made five changes to Tottenham's starting line-up for the Group J clash ahead of a Premier League encounter with Brighton and Hove Albion on Sunday.

Asked if any players put forward their case to start more regularly, Mourinho said: "Look, you know what our best team is. You know the same thing that I know and that everybody knows.

"Tonight, my future choices are going to be very easy. But again, there is only one responsible, not the players, it's my responsibility."

Alli in particular struggled to get involved in the game during his 45 minutes on the field, losing possession 11 times, failing to muster any shots, and attempting only 15 passes in the opposition half.

"I don't want to analyse individually," Mourinho replied when asked about Alli's performance. "I don't like to do that, especially with you [the media].

"It's fair to say that players with bad performances, they influence the team. But also a team influences individual performances. So it's not for me to individualise, and to bring some names to the table.

"When you are a player with ambitions to be a first choice, and play in the most important matches, you have to show it.

"That is an obvious thing. Everybody works the same, trains the same, learns the same, of course, I expect. It's my entire responsibility."

Tottenham did not manage a single attempt on target when chasing a goal in the second half, with the Belgian Pro League leaders holding on for a famous victory.

"It's disappointing because I keep saying the team has to be a state of mind and you have to keep always every match to play well and to win," Mourinho said. "It's as simple as that.

"But it is more complicated because you have to keep a certain motivational level. You have to be consistent. On Monday [against Burnley], we needed everything from every player. Of course, it's frustrating we come here tonight and don't do the same."