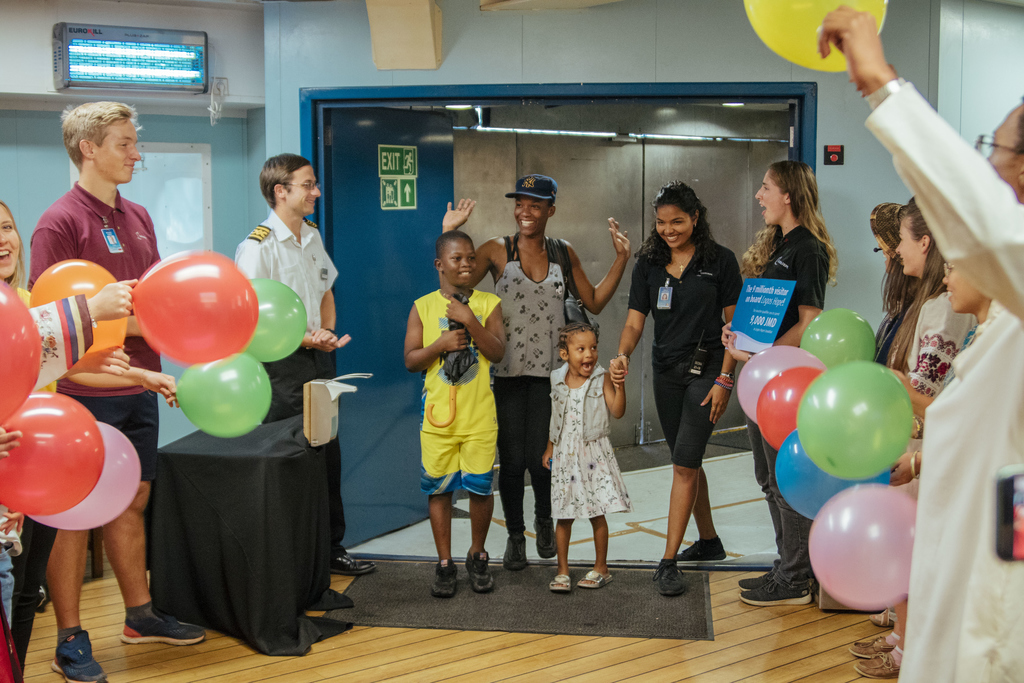 Surprise! The grand entrance of Shamara Williams, the nine- millionth visitor on the Logos Hope during the floating book fair’s stop in Kingston.

Logos Hope has welcomed the nine-millionth visitor to the book ship since she began operating in 2009.

In the Caribbean Cement Pier, at Rockfort, Kingston, an unsuspecting member of the public was welcomed aboard with fanfare as she stepped off the gangway and into the world’s largest floating book fair.

Shamara Williams screamed: “This is the best day ever!” and danced with delight as crew members from the ship’s percussion group played their drums, while volunteers, dressed in an array of national costumes, cheered and onlookers applauded.

Shamara, from the nearby district of Harbour View, was congratulated by the ship’s director, Pil-Hun Park of South Korea and Captain James Berry of the United Kingdom.

She was given a personal tour of the vessel and received a voucher for $9,000 to spend in the book fair.

Shamara’s two children were excited to select books on their favourite topics.

Nine-year-old Dareign likes to read stories about adventure, doctors and animals, while his four-year-old sister, Samoya, couldn’t wait to go in search of books about unicorns and fairy tales.

Logos Hope has celebrated milestone visitors in the Caribbean and Latin America in recent years.  In fact, the six-millionth guest stepped aboard in Guyana in December 2016; the seven-millionth in Mexico in April 2018 and the eight-millionth in Chile in May 2019. Nine months later, a Jamaican became the nine-millionth.

Shamara’s first visit onboard the Logos Hope was in 2010, the year in which her son was born.

“At that time, my baby was too little, so I couldn’t experience all the activities offered on the ship,” she said.  “So offering me a tour today is a wonderful fulfilment of the wish I had 10 years ago.  I came today because I wanted my children to experience being on a ship and look at what happened. My mum is going to be very happy when I tell her, because with the voucher I can get books for the entire family,” said Shamara.

Logos Hope is open to the public at the Caribbean Cement Company port in Kingston until March 15 (closed Mondays).