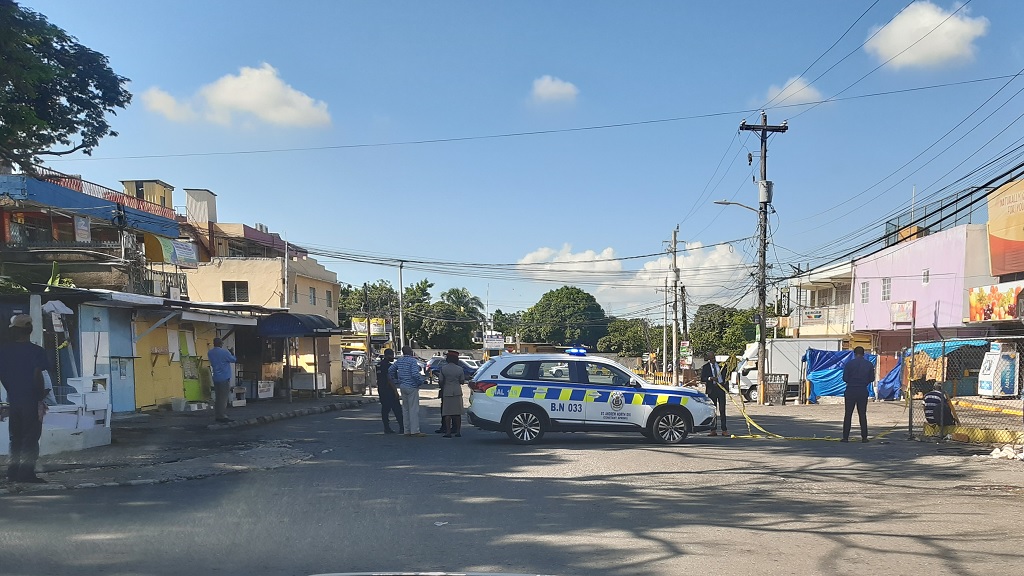 Police officers at the crime scene on Chancery Street after a man was shot dead there on Tuesday morning.

Commuters and transport operators were sent scurrying for cover after gunshots rang out at the busy Chancery Street bus terminus in St Andrew on Tuesday morning.

After the smoke cleared, one man was dead. He has so far been identified only as ‘Zacky’ - a 'loader man' from an Ackee Walk address.

Persons on the scene told Loop News that two men rode up on a motorbike and approached ‘Zacky’. They shot him a number of times before he could take evasive action.

He died on the spot.

For months a bloody battle has raged between gangs from an area on Red Hills Road known as ‘Common’ and another along Chancery Street known as ‘Ackee Walk’. Police have reported that the conflict is over extortion rights to the busy bus terminal.

Several persons from both communities have been killed and others shot and injured as a result of the gang feud.

“’Zacky’ was one of the most senior loader men who hustle out here and him not involve in any gang war. This thing going too far now as they just kill a man because of where him live and don’t care,” one man, who claimed to have been on the scene when the attack occurred, said.

Chancery Street, a bustling hub of economic activity, is home to several businesses including a supermarket, pharmacy, bars and hairdressing parlours. Some business owners say the constant bloodletting in the area has been bad for business and has been scaring away customers.

A number of vendors also conduct business there.

UPDATE: Loader man gunned down on step of bus in Half Way Tree

Shopkeeper gunned down in Brown's Town