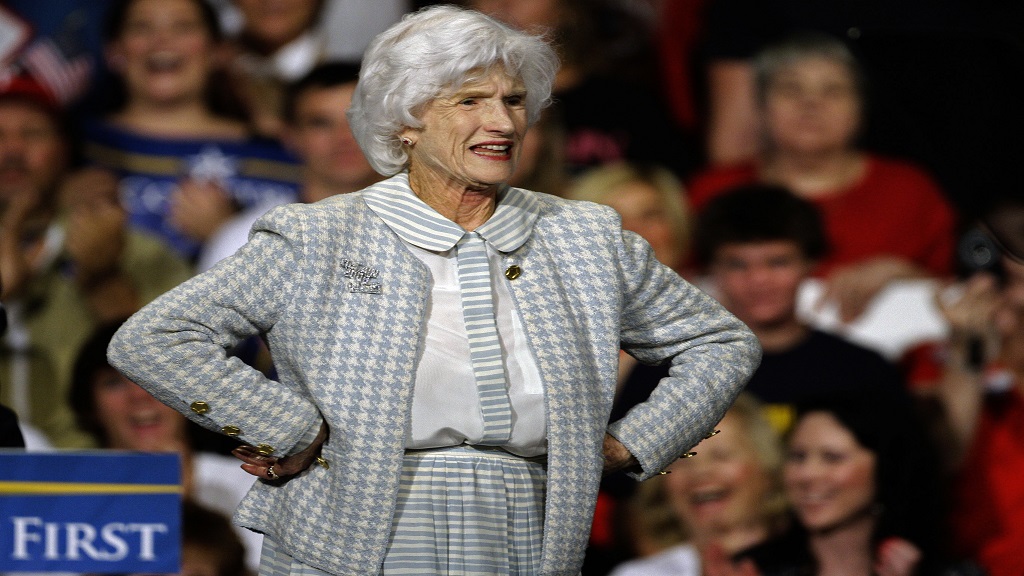 In this October 16, 2008, file photo Roberta McCain, stands on stage during a rally in Downingtown, Pa. (AP Photo/Carolyn Kaster, File)

Roberta Wright McCain, the mother of the late Senator John McCain who used her feisty spirit to help woo voters during his 2008 presidential campaign, has died. She was 108.

A spokesperson for daughter-in-law Cindy McCain says Roberta McCain died Monday. A cause of death was not immediately released.

“It is with great sadness that I announce the death of my wonderful Mother In-law, Roberta McCain,” Cindy McCain posted on Twitter. “I couldn’t have asked for a better role model or a better friend.”

In a tweet, granddaughter Meghan McCain thanked her “Nana” for teaching her how to live life with “grit, conviction, intensity and love.”

“There will never be another one like you, you will be missed every day. I wish my daughter had gotten to meet you,” said McCain, who gave birth to her first child last month.

At 96, Roberta McCain became the Republican senator’s secret weapon at campaign stops as evidence that voters need not worry about her son’s age — then past 70 — as he sought the presidency.

She once said her son liked to hold her up as an example of “what he hopes his lifespan will be.”

In August 2018, however, it was the mother who ended up mourning the son when John McCain died of brain cancer. Despite being slowed by a stroke, Roberta McCain attended the memorial and burial services in Washington and Maryland for the middle son she called “Johnny.”

She remained energetic and active into her 90s, traveling often with her identical twin sister Rowena, who died at age 99. She attended the 2008 Republican National Convention, where her son credited “her love of life, her deep interest in the world, her strength, and her belief we are all meant to use our opportunities to make ourselves useful to our country."

It was 1933 when a 20-year-old Roberta Wright defied her family and eloped with John McCain Jr. Documents released in 2008 showed that as a young ensign, John Jr. got into trouble when the couple decided to marry and he left his ship without permission.

“I got married young,” she told The Muskogee Phoenix in her native Oklahoma in 2008. “I was 20 years old, and it was the best decision I ever made.”

She married into a storied military family — her husband retired in 1972 with the rank of four-star admiral, the same rank held by his father, John S. “Slew” McCain Sr. Her son was held as a prisoner-of-war in Vietnam even as his father was commander in chief of Pacific forces in the late 1960s.

Roberta McCain was a young woman when her three children were born, later telling the Oklahoma paper that she was “too young and irresponsible to know you were supposed to worry about them. I just let them go. I got a kick out of watching them.”

The senator said in 2008 that his “father was often at sea, and the job of raising my brother, sister and me would fall to my mother alone.”

Her other son, Joe, told The Associated Press in 2007 that the family had endless dinner-table discussions about history, politics and legislation led by their mother.

“We were all basically on the same side of the fence,” Joe McCain said. “But it was like Talmudic scholars arguing about a single word or an adjective in the Testament.”

Joe McCain was at his mother's side at her Washington home when she died, according to a statement from Cindy McCain. Roberta McCain's daughter, Jean McCain, died last year.

When Senator John McCain wrote a memoir about his experience as a POW for nearly six years in a north Vietnamese prison, he described times when he swore in English at his Vietnamese guards, who didn’t understand.

His mother later told him: “Johnny, I’m going to come over there and wash your mouth out with soap.”

Meghan McCain recalled her grandmother's strong will and sense of duty in a 2012 column for The Daily Beast website, writing that Roberta McCain did not have “a lot of patience for excuses, especially from my father when he was growing up and acting out.”

“She once hit him over the head with a thermos in the back of a car because he was acting up so badly on a road trip,” Meghan McCain wrote.

The McCain matriarch’s spunky personality became the stuff of stories for the family — and among those in their circle of Washington society.

“Last Christmas, she wanted to drive around France. So she flew to Paris and tried to rent a car,” the senator once joked. “They said she was too old, so she bought one and drove around France.”

Cindy McCain wrote Monday that “Roberta was the liveliest presence in every room she graced, an irresistible force of nature.”

Roberta Wright was born February 7, 1912, in Muskogee, Oklahoma, where her father was a businessman whose varied, colorful enterprises included bootlegging and oil wildcatting. The family moved to Los Angeles in the mid-1920s.

Her husband commanded submarines in World War II and was second in command of the cruiser St Paul during the Korean War. He later held key posts including the Navy’s chief of congressional liaison, and died in 1981.

In 1934, when a fitness report deemed him underweight, the future admiral wrote: “My wife doesn’t know how to cook, and my meals are very irregular.”