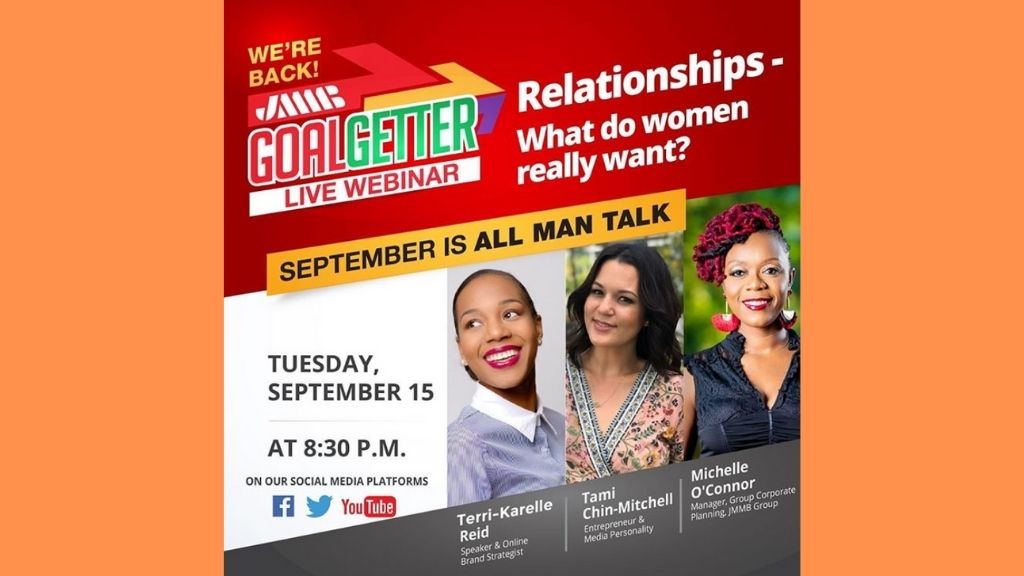 As the weeks of the JMMB Goal Getter Live forum progressed, viewers got the chance to listen to women discuss what they truly want from men in relationships. (Photo: via Instagram)

Women have been labelled ‘complex creatures’ by their male counterparts, and many men have been left dumbfounded by what seems like the age old question, ‘What do women really want?’

In fact, it’s often the topic of discussion in many books, movies, late night banters and even office discussions that have erupted, to solve this ‘mystery’.

The aim was to dispel certain myths and misconceptions, and introduce a triad viewpoints of the role of men in the lives of these working women.

Admittedly, their views are their own, every woman has her preferences and pet peeves, so, the general understanding is that each man will still have to navigate the peculiarities of his mate.

This while taking clues from the discussion to give him a better understanding of the idiosyncrasies of the ‘fairer sex’.

The leading ladies on set had these insights to share about what women want:

Tami Chin-Mitchell challenged ladies to first examine themselves and have a keen sense of their worth and the best parts of themselves, before seeking a mate to complete them versus complement them.

Mitchell admitted that her husband, entertainer, Wayne Marshall – who appeared in the first series of the men’ edition of the series – reflects a lot of what she loves most about herself – laughter, confidence, consistency, honesty and stability.

O’Conner outlined that women, ‘have to position ourselves for good men to come into our lives.’

She also implored women to be clear about what they want in a partner and remain positive about the prospects.

Women want a relationship where they have peace and joy with their partner.

Tami gave the analogy of a steady carriage navigating the potholes of life together, knowing that, in spite of the turmoil happening around, you have the support of each other and not added stress from your partner.

The ladies certainly dispelled the myth that women were fixated on physical attractiveness.

In describing the ideal man, she detailed attributes such as ‘good looking, successful and rich’, and stated, ‘It depends on the phase and stage you are at (in life) …it comes down to your evolution (as a woman) along her journey and her experiences, and this will determine the kind of man that she wants.’

She further highlighted that a woman wants a man that recognises her greatness and ‘his objective is to enhance you and not to out your flame, (instead he fans it)…’

Essentially, Reid prescribes men to support and uplift their partners instead of being driven by their own ego and competing with their partners.

During the lively discussion, expertly led by Clyde Shaw, training and development manager at JMMB Group, the trio also sought to dispel and challenge stereotypes associated with both sexes in relationships.

Among those broached were:

‘All women are gold diggers’: Terri outlined a distinction between a gold digger and wanting financial security, which is logical and a necessity for everyone.

She charged men to examine the approach they bring to the table in seeking to attract and impress women.

Tami in giving further insight to th dynamic of women being labelled as gold diggers, noting that these mindsets and behaviours are learned, and it is possible to unlearn them.

Both Terri-Karelle and Tami agreed that mothers have a vital role to play in helping their children to develop balanced mindsets.

This the nurture when they have healthy conversations, and help their sons to both identify red flags and examine how their potential partner treats with their own money.

Independent women are not vulnerable

This is a common misconception that Reid notes can reveal insecurity in men, or just cause them to not be supportive of these type of women, financial and otherwise.

Terri advises men to embrace strong and independent women in a relationship by observing the ‘gaps’ to be filled in their lives instead of competing with them.

‘It’s not always about buying flowers, or fancy dinners; it is sometimes about meeting her needs in a mindful way (without being asked).’

Tami, in agreeing with Terri’s point, confirmed that filling these gaps require a clear understanding of how one’s partner receives and appreciates love.

She referenced Gary Chapman’s The Five Love Languages as a starting place to find better understanding.

Role of a man: Provide, protect, please and perform

Tami advised that though men have been socialised to be providers, a man’s worth should never be measured by his ability to provide, especially financially.

Instead, emphasis should be placed on his character, even as she acknowledged that financial needs are real.

Reid chimed in, outlining: ‘Provision includes, but goes beyond, finances…and it is more about filling in the gaps that exist in each other’s lives’.

Tami cautioned that a one-dimensional view of provision can negatively impact men having healthy relationships with partners and others.

Michelle shared that a man’s role as a protector is not just confined to physical, but also to guard your image, and implored men to think of and treat their spouses as precious.

‘When you show your woman that I am here for you, I am going to be the person that is guarding you all the time, that goes far beyond what you look like, what is in your bank account, or anything else and your woman will stand by you.’

O’Connor also added that it is the simple things that a man does, in taking care of a woman that pleases her.

Therefore, pleasing your partner starts long before you enter the bedroom; and she in turn is happy to give herself to him.

The lively discussion also saw the women sharing other solid relationship pointers, such as, underscoring the importance of clear communication, while challenging individuals to reframe and examine their negative mindsets, in a bid to enjoy healthier, happier relationships and to set their own expectations based on the uniqueness of their relationships.

This episode is a part of a special month-long edition of the JMMB Goal Getter Live series dubbed, ‘All Man Talk’, which ends September 30.