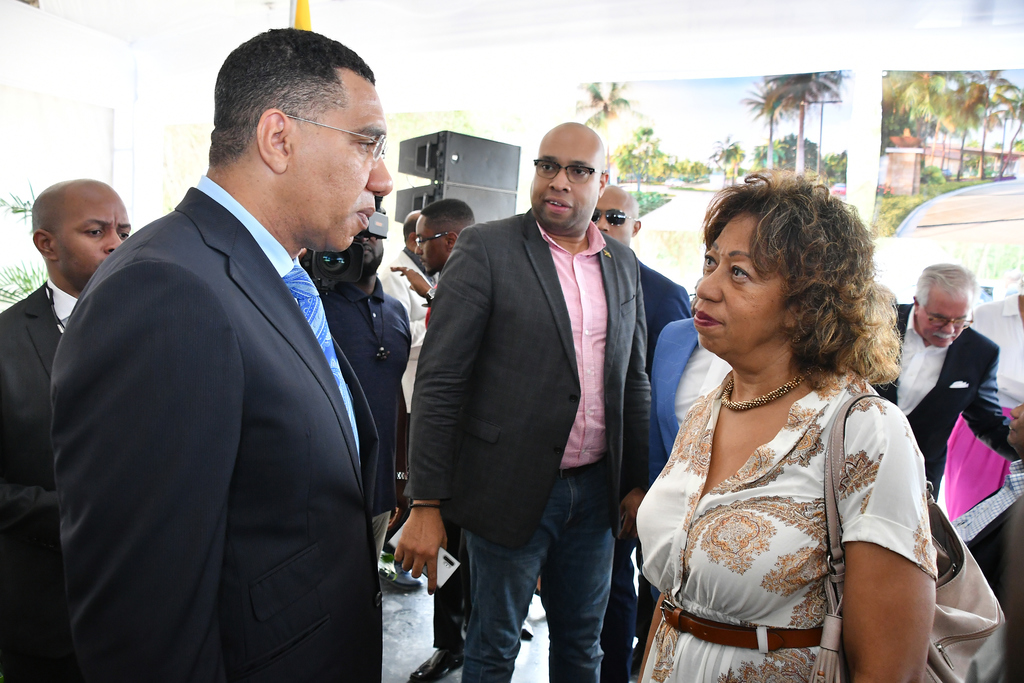 Jampro President Diane Edwards speaks to the Most Andrew Holness at the groundbreaking of the Sugarcane Bay Development project.

The agency made the comments after the ground-breaking for the Karisma Sugarcane Bay Development last Thursday. The project is estimated to be valued at US$1 billion.

From as far back as 2016, Jampro has been delivering business facilitation services to the Karisma Development Project and the agency was particularly pleased to see the project come to fruition as it bolstered commitment to ramp up focus on mega projects.

Jampro’s President, Diane Edwards, said the agency is focused on bringing multi-faceted tourism developments to Jamaica that would include not only hotels, but space being used to create residential areas, commercial space, agricultural projects, and other services.

Edwards said Jampro is committed to attracting more of these mega-developments to Jamaica, as they will create jobs in multiple industries and more investment dollars. 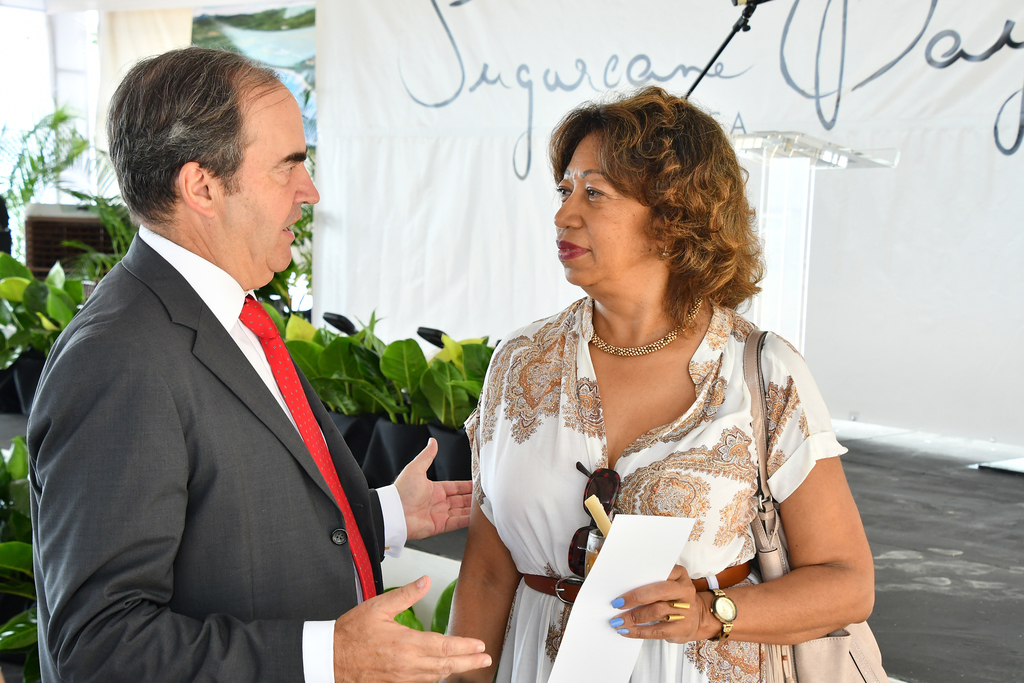 The land being used for the Karisma development in St Ann was purchased as part of Jampro, the Tourism Enhancement Fund (TEF) and the National Environment and Planning Agency (NEPA)’s Shovel Ready Initiative, which includes pre-packaged tourism projects.

This initiative aims to facilitate large-scale developments at a faster and more efficient pace, therefore allowing for quicker penetration of investment dollars and jobs into the economy.

Ruben Becerra, Vice President of Corporate Affairs & Business Development Karisma Hotels and Resorts Corporation, said Karisma was happy to be investing in Jamaica, and he thanked Jampro for its support.

He said, “Karisma Hotels and Resorts is pleased to be investing in Jamaica, and we greatly appreciate Jampro's support through the entire investment process. Jamaica is a special location for Karisma, and this new project, Sugarcane Bay, will join the Azul Beach Resort as one of our major offerings on the island. We look forward now to finalising this project, and seeking new opportunities to grow Karisma's presence in Jamaica.”

Edwards explained that the Shovel Ready Initiative has been an excellent launching pad for Jampro to work with companies like Karisma, who are interested in investing in Jamaica’s tourism sector, as it provides an open platform for investors to view opportunities and further to utilize Jampro’s business facilitation services; allowing for enhanced engagement with government stakeholders, to quickly oversee developments and other approvals needed.

The Jampro president says the agency is working through Shovel Ready and other initiatives to facilitate more investors like Karisma to bring impactful tourism projects to Jamaica.

Edwards said, “Tourism has always been a pillar of the Jamaican economy, but there are still areas that remain untapped in the sector. With projects like this [Sugarcane Bay] and the Amaterra project in 2019, we see that there is great potential for these large tourism developments that are more than hotel developments, as they can create jobs and other opportunities in agriculture, manufacturing, energy, services and other industries and sectors.”

“It is therefore our goal to widen the scope of what is considered a ‘tourism investment’, to further deepen the influence these projects will have on the economy.  Because of this, we are pleased with Karisma’s interest and work in Jamaica, and we look forward to seeing the full impact this project will have on St Ann and Jamaica on the whole,” she added.