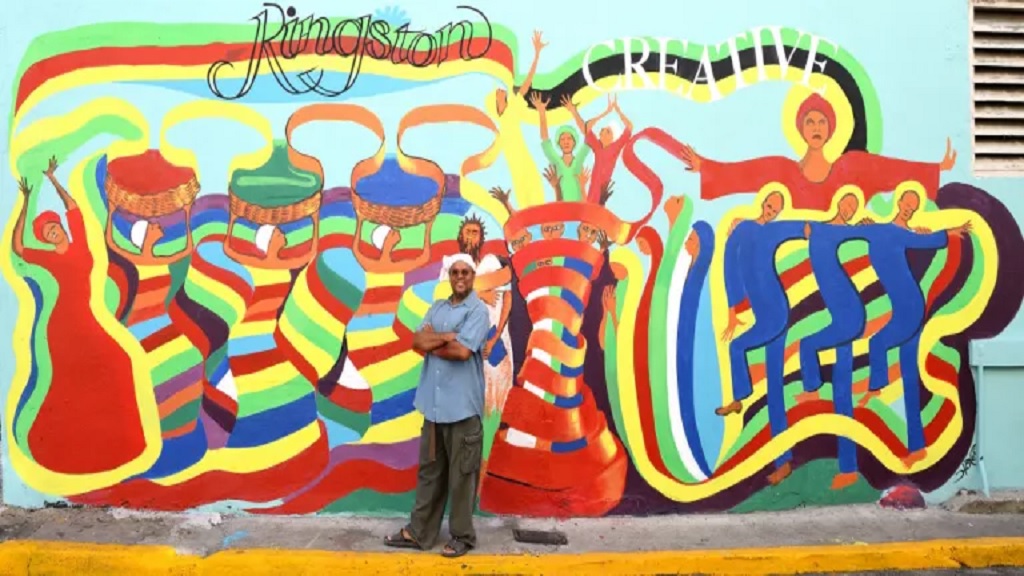 Artist Bernard Stanley Moyes stands in front of his mural that has been animated into an Augmented Reality (AR) Mural by Nex Gen Creators. (PHOTO: Kingston Creative)

The project was the result of a collaboration between Kingston Creative and sponsor, technology company tTech.

The mural was created by Jamaican artist Bernard Stanley Moyes and animated into augmented reality by Nex Gen Creators.

The augmented reality mural can literally come to life as it features audio and other features.

Users first download the Artivibe App from the Google Play store or the App store, and then focus their smart devices on the mural and see it literally come to life before their eyes.

According to CEO of tTech and Kingston Creative member, Chris Reckord, the unveiling of the mural is the first in a number of projects geared at regenerating the urban environment of downtown Kingston using art to improve the space where people work, live and play.

He said one of the objectives of Kingston Creative is to “Create a space for arts in the Caribbean, turning downtown, Kingston into a focal point for arts tourism and thereby increasing local and visitor traffic to the capital.”

A Downtown Kingston Art District and Creative Hub are also being developed over a 10-year time span, Reckord said.