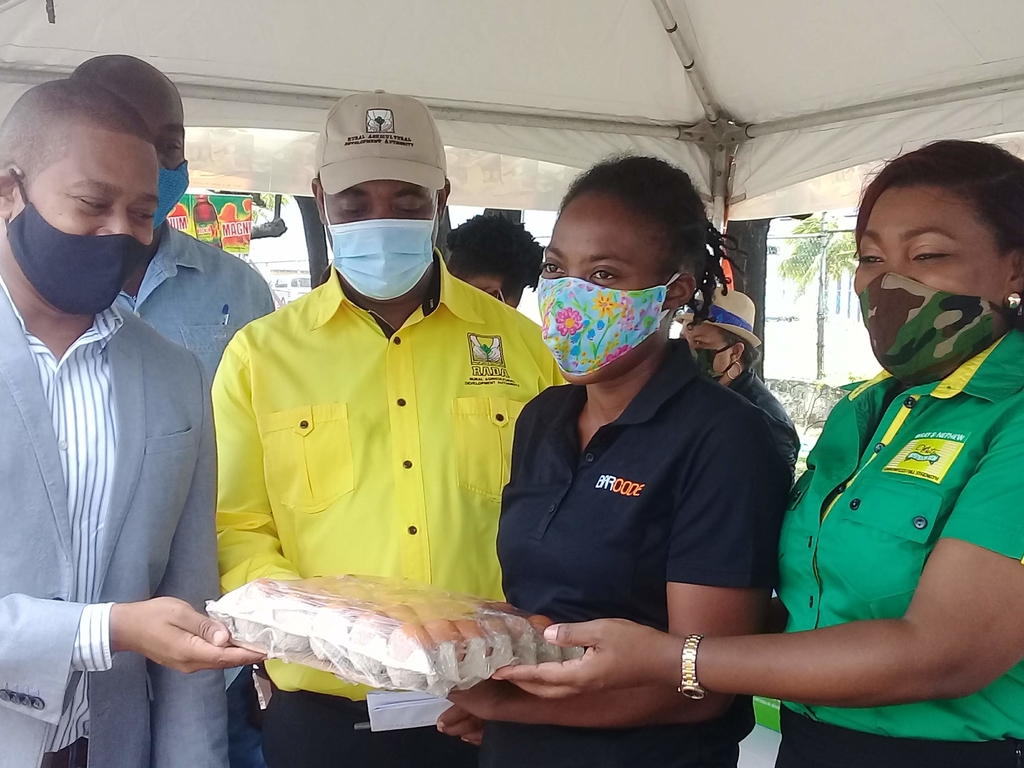 Minister of State in the Ministry of Agriculture, Floyd Green (left), presents a tray of eggs to Monique Mohalland of Barcode during the J Wray and Nephew Farmers’ Market for bartenders at the company’s offices on Spanish Town Road .Joining in are Peter Thompson, CEO of RADA and Marsha Lumley, marketing director for Jamaica and the Caribbean for J Wray and Nephew.

Each bartender received a parcel containing fruits and vegetables, a tray of eggs, in addition to a bag with hand sanitizers, a flask of Campari and Magnum as well as a gift voucher of $4,000, which is redeemable at local supermarkets.

The farmer’s market was an effort from the manufacturing company to lift the spirits of the bartenders, who have been out of work since the shutdown the entertainment sector on March 12.

The lockdown was part of the government’s effort to stem the spread of COVID-19 on the island.

The bartenders previously worked at J Wray and Nephew events through Barcode and Premium as well as the J Wray and Nephew Academy. They collected the care packages by either walking in or driving through the event, which was themed “Shaken Not Broken.” 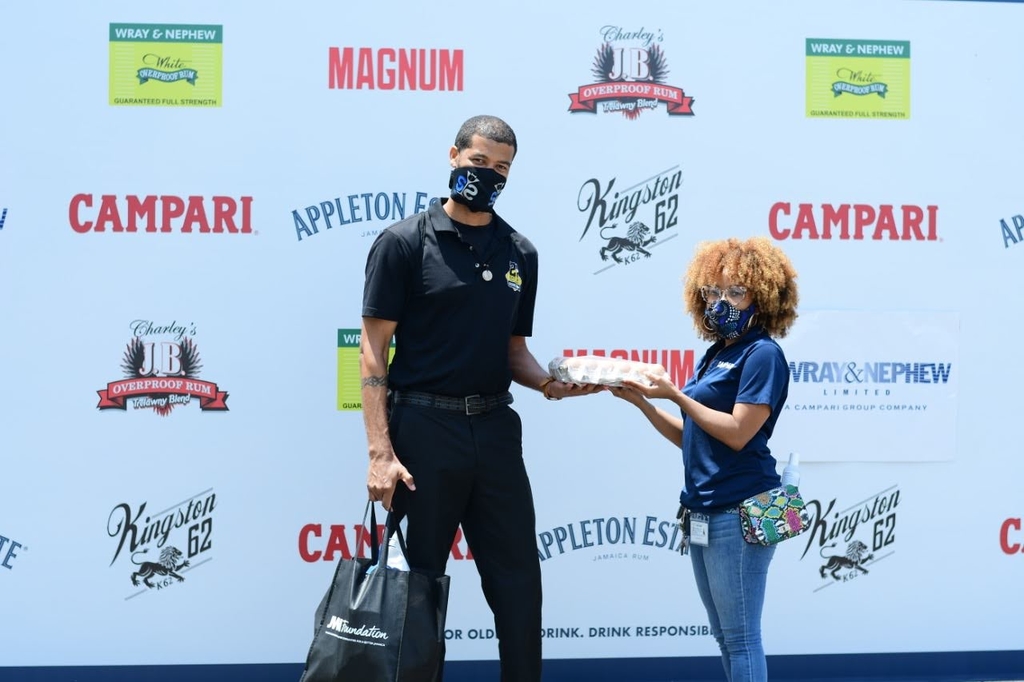 Sheldon Spencer, chairman of the Jamaica Union of Bartenders and Mixologists receives his care package from Samara South, public affairs and government relations Specialist at J Wray and Nephew.

This is one of several initiatives spearheaded by J Wray and Nephew and its foundation since the first case of the coronavirus was confirmed in Jamaica.

J Wray and Nephew has donated sanitisers to the healthcare system and provided $35 million in care packages to bar operators.

“Today was the time for the bartenders, the persons who are directly pouring the liquid into cups. Those who are advocating on our behalf. Those who are really entrepreneurs in and of themselves because most of these persons are freelancers and if they don’t earn, they can’t feed their families,” said Tanikie McClarthy Allen, senior director for public affairs and sustainability at J Wray and Nephew.

McClarthy Allen, who also serves as CEO of the J Wray and Nephew Foundation added, “To be out of work for almost three months, is a substantial impact on anybody’s budget, so we felt we had to come to the table and to deliver some support in a real way.”

Click the gallery for more photos captured by Job Nelson

Marsha Lumley marketing director for Jamaica and the Caribbean at J Wray and Nephew Limited, said, “We decided that we wanted them to see that not only do we care when everything is good and life is good, but also when things are not at its best. We are here to support them and work with them in partnership throughout.

“It was giving the bartenders a lot of what they need, a lot of what we find will be useful for them during this time and also some of the tools that they use in their work and their daily life”.

For Minister of State in the Ministry of Agriculture, Floyd Green, the twinning of resources by J Wray and Nephew and Rural Agricultural Development Authority (RADA), which sourced the food items, is one of several partnerships between the public and private sectors to help Jamaica rebound from COVID-19.

“Jamaicans we are not broken and we will recover, we will rebound and this is how we will rebound, by the private sector and the government coming together and helping us to get through this difficult time.”

“One of the good things with this redistribution model is that they are getting Grade A quality produce because a lot of these items would have gone into the hotels and they would have to be at the Grade A standard,” Green said.

According to Barcode bartender, Samara Hardie, the number of items she received was a surprise.

Sheldon Spencer, chairman of the Jamaica Union of Bartenders and Mixologists, believes the care package was appreciated by the bartenders.