He’s fought COVID-19 for months. Can he ever really beat it? 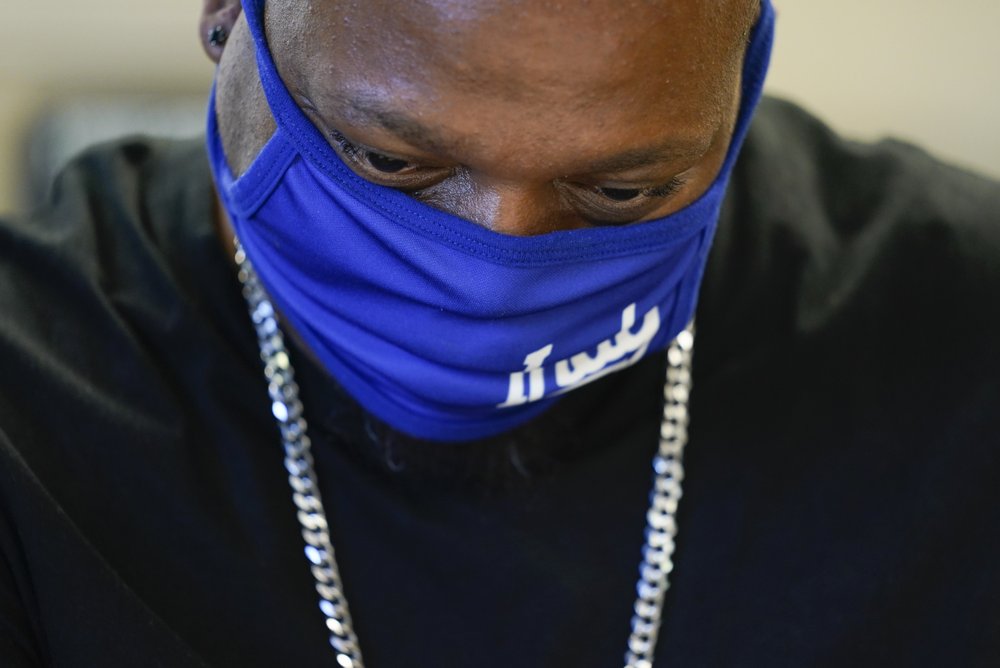 Larry Brown had been on a ventilator for 37 days.

Though sedated, he had tried to pull off the equipment keeping him alive, so his arms were strapped down.

Larry Brown has been battling COVID for months

But Brown’s lungs were filling with fluid, and doctors didn’t expect him to last much longer.

As visitors weren’t allowed in the intensive care unit, a nurse placed a phone next to his ear.

‘Thank you for fighting so hard, Larry,’ his sister-in-law, Ellie Brown, told him. She was careful not to say goodbye. If he could hear her, that might scare him.

Like millions of COVID-19 cases, Brown’s had started with minor symptoms — fatigue, loss of appetite.

When he fell ill in mid-March, people in the United States were becoming familiar with the novel coronavirus.

Mask use wasn’t widespread outside hospitals. Around Brown’s hometown, Indianapolis, fewer than 10 new cases were reported each day, on average.

Businesses were just starting to shutter around him in response to state orders — but only until the country could flatten the curve, nearly everyone thought.

And the vast majority of cases weren’t severe, officials said.

Yet Brown spiralled quickly. His doctors were stumped as they scoured medical texts for treatments.

His close-knit family watched him deteriorate in the hospital, even as others recovered from the virus.

They feared they would lose him but wouldn’t call it quits. ‘People weren’t ready to go there,’ Ellie Brown said.

Turns out, neither was Larry.

After that phone call, Brown slowly started to improve. He would remain on the ventilator for nearly two more weeks, for a total of about 50 days.

But coming out of the medically induced coma was only the beginning of Brown’s recovery.

When Brown entered the hospital, there were about 75,000 COVID-19 cases recorded nationwide.  By the time he left, that figure had topped two million.

Month by month, the number of fatalities ticked up by tens of thousands, surpassing 200,000 dead in September.

And yet, Americans who’d grown tired of quarantines were pushing a return to ‘life as normal’.

That’s not possible for Brown. At least not yet. There is no end in sight to a rehabilitation that already has lasted months.

His hands — which helped make him Indiana State’s eighth all-time receiving leader — can’t even open a can of Pepsi.

He didn’t die of the virus, but he’s coming to terms with the fact that his life might never be the same.

Brown doesn’t know exactly when he first felt symptoms. Around March 15, he noticed he was struggling to focus at work and taking naps.

He didn’t have a cough like many coronavirus patients, but he did lose his appetite.

He knew that was a sign: ‘I’m always hungry’, the five-foot-nine-inch, 240-pound man said.

He was hearing more about the virus. Schools and sports leagues began shutting down. Indiana Governor Eric Holcomb would soon order residents to stay home unless they had to go to work, the doctor or an essential business.

Brown called his doctor, who told him to quarantine. He hunkered down, and his mom sometimes dropped off meals.

She, too, was growing more nervous about the virus. A couple days earlier, she went to her Friday night bowling league to tell them she wouldn’t be back; she was concerned about spreading risk in her family.

She walked out of the bowling alley that night with a friend who would later die of COVID-19.

Brown’s symptoms worsened. Nightmares arrived with hot and cold flashes. He dreamed something was chasing him, and he’d wake up drenched in sweat right before it caught him.

He struggled to draw deep breaths.

On March 25, an exhausted Brown called his mom for help. Marilyn Brown dialled 911, and an ambulance took her son to Community Hospital North.

Larry Brown was admitted. His spirits rose over the prospect of getting help.

‘I thought I would be here about a couple days,’ he said. ‘Some medicine, some IVs, then I’d be back home’.

He remained unfazed even as he saw his 66-year-old father wheeled past him in the emergency department. They waved at each other.

John Brown thought he had the flu, but the retired army master sergeant had grown so weak he could barely walk from his bed to the bathroom.

That forced Marilyn Brown — who would wind up with a mild case herself, though she didn’t suspect anything at the time — to dial 911 again that day.

Larry Brown eventually settled into a patient room and rested while watching his favourite show, 48 Hours.

Soon, though, he was moved to another room — he wasn’t quite sure why.

Doctors moved Brown to the ICU and started him on the ventilator while grappling with how to treat him.

We were ‘all learning on the job,’ said Dr Rajat Narang, a critical care doctor and lung specialist.

They administered the malaria treatment touted by President Donald Trump, hydroxychloroquine, but saw no progress.

They put him in a medically induced coma, and attached him to an ECMO machine, which essentially did the job of his lungs by transferring oxygen into his blood.

An MRSA infection set in and led to the life-threatening condition sepsis, which can cause organ failure.

Despite the no-visitors rule, staff feared Brown had little time left and let his mom and one of his daughters see him.

Brown wouldn’t recall that emotional visit, or the phone call with his sister-in-law. The weeks seemed like a black hole, lost time where all he remembers is nightmares: He was in a different hospital, and staff there wanted to kill him.

Doctors aren’t sure why Brown started to improve. Narang suspects the ECMO machine saved his life by giving his lungs time to recover.

Doctors also had consulted with an infectious disease expert and adjusted his antibiotics.

Whatever the reason, Brown woke up on May 10, a day before his 46th birthday, with a tracheotomy tube helping him breathe.

At first, he couldn’t walk. He could barely scribble and couldn’t speak, even to tell the hospital staff to turn down the volume on the room’s TV.

Hospital rehabilitation started quickly. He had to build strength in his legs first to stand. Once he could do that, he could try a few steps.

And then, climbing stairs — about 20 of them. He was out of breath all the time, and finally making it to the top felt like he’d climbed Mount Everest.

The work made him sore and reminded him of football training camp, when his body had to adjust to being hit. But that soreness used to fade as the season progressed.

On June 12, a local TV station shot video of him leaving the hospital’s rehabilitation centre — ending a total stay of nearly 80 days.

He ambled through a group of applauding employees and into a foreign world.

Everywhere he went, people wore masks. Businesses closed early if they opened at all. He was surprised by the traffic pattern at Walmart, where customers could enter through only one door, and walk in one direction.

Grocery prices had jumped; he noted an increase of $2 per pound of ground beef. Life became a large list of unknowns.

He doesn’t know how he got the coronavirus.

He doesn’t know why his father’s case was comparatively mild, as John Brown spent seven days on a ventilator — about 40 less than his son.

He doesn’t know if the tingling sensation in every finger except his pinkies will ever go away and allow him to type without shooting pain up his wrists.

He doesn’t know when he’ll be able to return to his job as a business analyst with the health insurer Anthem — a position that’s about 60% typing.

He doesn’t know if he’ll play basketball with his kids again or if he’ll live with a permanent disability, which doctors believe can happen in cases like Brown’s.

He says he’s blessed to be alive but estimates he’s at 40% of his pre-coronavirus self.

Brown’s doctors have unanswered questions, too. COVID-19 has disproportionately affected African Americans like Brown; what role might that have played? Brown isn’t diabetic; he doesn’t smoke.

His weight may have been a factor, but plenty of people who check all those boxes bounce back quickly.

Why did his case grow so severe — why did he become what some call a ‘COVID long-hauler’?

Brown calls it ‘the hundred-dollar question’.

Winter is coming, along with flu season. A national election looms. Then come Thanksgiving and Christmas, with some families unsure whether or how they’ll celebrate safely, and others determined to have a ‘normal’ holiday.

Some states have fully reopened restaurants, bars and other businesses.

Thousands of self-identified long-haulers are sharing their stories and getting informal advice via social media — how many more would come from a second wave of the virus?

Brown doesn’t wish a case like his on anyone.

He fills his days watching his daughter’s soccer games, taking walks, or driving a bit to see his parents or girlfriend. Then there are the medical appointments.

Hand therapy is twice a week. His hands, once making savvy plays on game days, are now shaky when he snags a medicine ball bounced off a trampoline.

And there are neurology appointments. Recently, that doctor — who remembered Brown from their high-school football days, and teased him about a fumble at homecoming — attached electrodes to his arms and sent mild pulses to gauge nerve responses.

At home, Brown worries about his three daughters catching the virus, but says he’s not ‘walking around on eggshells’.

Still, masks are like car keys, picked up as soon as anyone walks out the door.

He left the hospital nearly four months ago, yet he still has to stretch his hands and legs, which stiffen up frequently.

He avoids the deep, L-shaped sofa in the living room unless someone is around to help him get out of it.

He grabs one of the chairs surrounding his poker table to scoot around the first floor of his home when he can’t walk much.

His 12-year-old daughter Justys, lifts the tab on his Pepsi can when he wants a fresh drink.

His kids — Brown’s ‘little sous chefs’ — chop ingredients so he can make favourite meals, meatloaf or baked mac and cheese.

He’s not yet comfortable gripping a knife, or holding a pen as he used to.

That means he makes phone calls or sends quick emails instead of writing thank-you cards for the mountain of well wishes he’s received.

Many came from people who read a public account of his hospital stay his sister-in-law posted on Facebook.

He can’t bring himself to read all those posts. He says he will eventually, but he’s in a good place and not interested in reliving the past.

Medical bills are trickling in. The hospital has written off many expenses, and Brown says he’s not worried about the rest.

Nor should he be, his mom tells him: ‘Your goal is to get better. The rest of that, we’ll deal with it when we get there’.

Brown isn’t sure how far recovery will take him. His kids giggled and thumped around upstairs as he searched for the right words to describe where he’s heading.

‘My expectations are ... they’re… I don’t know’, he said, glancing down briefly.

Coronavirus survivor: 'In my blood, there may be answers'