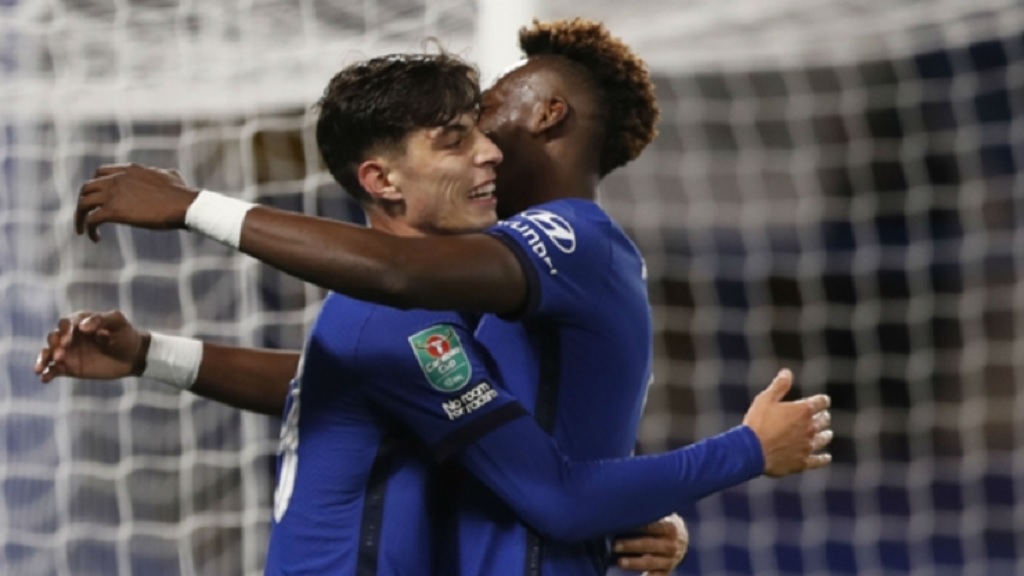 Chelsea's Kai Havertz,left, celebrates with his teammate Tammy Abraham, after scoring his team's second goal during the English League Cup third round football match against Barnsley at Stamford Bridge in London, Wednesday, Sept. 23, 2020.

Kai Havertz scored a hat-trick as Chelsea sealed their progression into the EFL Cup fourth round with a dominant 6-0 win over Barnsley.

Havertz had struggled in his first two Premier League appearances, but the former Bayer Leverkusen star got up and running in English football in style on Wednesday.

With Tammy Abraham opening the scoring, Havertz doubled Chelsea's lead before playing his part in Ross Barkley putting the hosts 3-0 up.

Havertz added to his tally with a superb finish soon after, subsequently rounding off his first senior hat-trick 10 minutes later – Olivier Giroud making it six for Chelsea late on.

Callum Hudson-Odoi squandered a great chance in the opening two minutes and Chelsea were fortunate not to be made to pay when Thiago Silva, making his debut, gifted possession to Patrick Schmidt, whose cross just evaded Cauley Woodrow.

Yet it was the hosts who struck first – Abraham slotting in after dispossessing Aapo Halme.

Mason Mount should have put Chelsea 2-0 up but Havertz made no mistake from the next opportunity, coolly dispatching beyond Bradley Collins from close range.

Willy Caballero kept Barnsley at bay three more times before the break, though hopes of a comeback were ended when Havertz forced Alex Mowatt into an error and Barkley drilled home.

Havertz had his second six minutes later, picking out the bottom-right corner with a wonderful strike.

His hat-trick goal came courtesy of a Collins howler – Barnsley's goalkeeper caught stranded on the edge of his box as Havertz nudged it past him and slammed into an empty net before being subbed off.

Barkley missed a glorious opportunity to add a sixth, but Giroud was on hand to pile further misery on Barnsley when he headed in debutant Ben Chilwell's cross late on.

What does it mean? Mourinho reunion next up?

Tottenham may receive a bye to the fourth round due to several Leyton Orient players testing positive for coronavirus, and Chelsea's reward for their victory would be a meeting with their former manager if that proves to be the case. Frank Lampard's side came out on top in both league clashes with Spurs last season.

Havertz arrives with a bang

Lampard has urged patience with Chelsea's new signing and Havertz repaid his manager's belief with an excellent display. Across Europe's top five leagues, only Robert Lewandowski (35), Lionel Messi (32) and Cristiano Ronaldo (31) have been involved in more goals in all competitions in 2020 than the 21-year-old, who has 18 goals and eight assists.

Barnsley no match for the big boys

Gerhard Struber set his side up to attack, but though the Tykes caused Chelsea problems at times, they have now lost 15 of their last 17 EFL Cup matches against top-flight opponents.

Chelsea travel to West Brom in the Premier League on Saturday, while Barnsley are in action against Coventry City in the second tier.