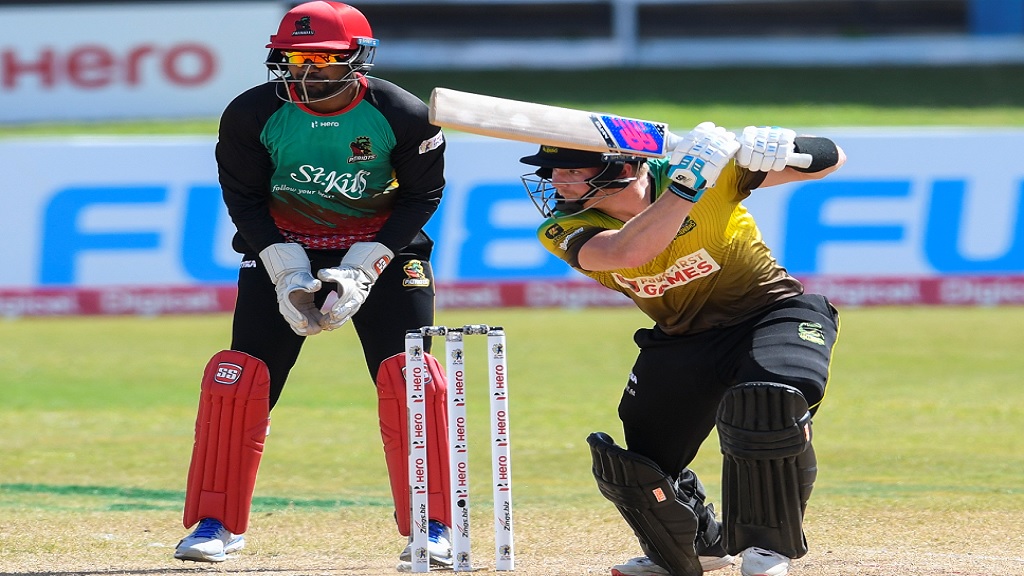 Glenn Phillips of Jamaica Tallawahs hits a four, while Denesh Ramdin of St Kitts and Nevis Patriots watches during the 18th match of the Caribbean Premier League at Queen's Park Oval in Port-of-Spain, Trinidad and Tobago on Saturday, August 29, 2020. (Photo by Randy Brooks - CPL T20/CPL T20 via Getty Images).

Jamaica Tallawahs secured their third win of the 2020 Hero Caribbean Premier League (CPL) with a 37-run victory against St Kitts and Nevis Patriots on a slow surface at Queen's Park Oval in Port-of-Spain, Trinidad on Saturday.

With the victory, the Tallawahs moved ahead of the pack into third place with six points, while the Patriots remain bottom of the six-team  table with two points.  Trinbago Knight Riders are leading the table with maximum 12 points, four ahead of second-place St Lucia Zouks on eight.

Rovman Powell opted to bat first, anticipating that the pitch would get slower as the game went on, and the Tallawahs made 147 for six with opener Glenn Phillips leading the way with an unbeaten  79 from 61 balls.

Promoted to open, Nkrumah Bonner steered Sheldon Cottrell for four and drove Ish Sodhi for the game’s first six, but in trying to pick up a second off Imran Khan he chipped to Cottrell at long-on and was caught for 16. The Tallwahs reached the powerplay at 28 for one.

Jermaine Blackwood got off the mark with a six off Sodhi, but Imran continued to be hard to hit. Patriots captain Rayad Emrit brought himself on, going for seven, and at halfway the Tallawahs were 53 for one.

First ball after the break, Blackwood carved Cottrell for four. Phillips ended that over with his first four off his 24th ball, but the Tallawahs lost Blackwood for 27 when he picked out Ben Dunk at long-off off Emrit.

Phillips finally hit his first six off his 28th ball, lofting Jon-Russ Jaggesar over long-on, but should have fallen two balls later, Nick Kelly spilling a simple chance. Imran tightened the screw, finishing his miserly spell with a maiden to Phillips who was now 28 off 36 balls. After 14 overs, the Tallawahs were 79 for two.

Asif Ali tried to pick up the pace, lofting the last ball of Jaggesar’s spell for a six, but fell for 14 in the next over, Sodhi’s last, trying to repeat the trick. Evin Lewis must get credit for a well-judged catch on the midwicket boundary.

Phillips at last clicked, passing a run a ball off his 46th delivery and reaching 50 off his 47th with sixes off Cottrell. While he managed another six off Emrit, the Patriots captain dismissed Powell, for one, and Carlos Brathwaite, without scoring, in quick succession and the Tallawahs reached 18 overs at 126 for five.

Cottrell started the 19th over with three full tosses, the first a beamer, but finished by bowling the struggling Chadwick Walton for one. Phillips kept going to the end, levering a low full toss over long-on for a sixth maximum and whipping a four through square leg. Phillips’ acceleration was stark - he scored 38 off his first 44 balls and 41 off his last 17, and at the end he was visibly drained, so much so Walton took over as wicket-keeper.

The Patriots too changed their openers, a groin injury to Lewis meaning Kieran Powell came up the order. While Chris Lynn opened his account with a six off Fidel Edwards, the bowler got revenge next ball with a late outswinger that hit middle stump and the basmen went for eight.

Mujeeb Ur Rahman and Veerasammy Permaul bowled two overs apiece and conceded just one boundary, with Powell was dropped by Asif off Mujeeb. The new opener cashed in with a lovely lofted four off Edwards. The Patriots closed the first six at 39 for one.

The Patriots stumbled further when Denesh Ramdin edged a cut to keeper Walton off Permaul and was out for13.  Dunk, on two, was bowled fourth ball by Brathwaite as part of a wicket-maiden, and Powell in trying to break free off Permaul gave Walton a stumping with time to spare. Powell made 21. Between the powerplay and the drinks break, the Patriots faced 20 balls and lost three wickets for six runs.

That stumping was Walton’s last act behind the stumps, as a recovered Phillips resumed his duties after drinks. After 10 overs, the Patriots were becalmed at 47 for four with Lewis injured, and with two overs of Mujeeb and four overs of Sandeep Lamichhane still to come.

Captain Rayad Emrit got his team its first boundary in 30 balls, but he fell two balls later for five, leading-edging Brathwaite to point. Lewis could be delayed no longer, which in turn brought Lamichhane into the attack. Nick Kelly swept for four, but still the over went for just six, and after 13 overs the required run rate had climbed to 11 an over.

Powell brought back Mujeeb who went for just four. Lewis and Kelly managed a brief flurry of boundaries off Lamichhane and Edwards. However, Edwards had the last laugh as Kelly dragged a pull onto his own stumps and was dismissed for 16.

The Tallawahs’ elite spinners would be denied no longer. Lamichhane’s seam-up variation saw the valiant Lewis hole out to long-on for 21. Mujeeb then grabbed a simple caught and bowled off Cottrell, and Lamichhane bowled Sodhi with a googly. The game was already lost when the final wicket fell, Brathwaite picking up a third as some compensation for his duck and his mauling by the Tridents’ Kyle Mayers on Wednesday.

The Tallawahs were without the injured Andre Russell, who is expected to be fit for Tuesday’s game against the Trinbago Knight Riders.