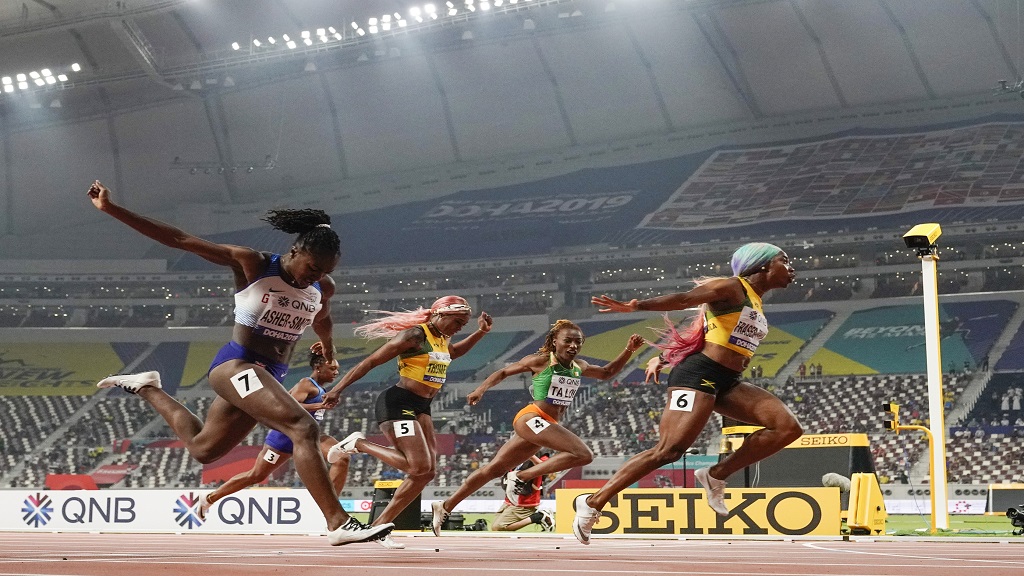 Four-time world champion Shelly-Ann Fraser-Pryce on Saturday clocked a world-leading 11:00 seconds in the women's 100m sprint in Jamaica's first track and field meet since early March because of the coronavirus pandemic.

Competing at the Velocity Fest meeting at the Ashenheim Stadium at Jamaica College, the 33-year-old Fraser-Pryce, representing Nike, won easily despite a stiff -2.2m/s headwind to beat the previous fastest time in the world this year - 11.05 - set by American Sha’Carri Richardson in Montverde, Florida on July 4.

At the 2019 World Championships in Doha, at the age of 32, Fraser-Pryce became the oldest woman and second mother in history to win gold at the 100m at a global championships.

Meanwhile, double Olympic sprint champion Elaine Thompson Herah had to settle for second place behind her MVP teammate Shericka Jackson in heat 3 of the women's 200m.

Jackson, the Doha 2019 400m bronze medallist, came home in 22.89 seconds, the fastest time over the heats, while Thompson Herah clocked 22.98 for the second-fastest time overall.

Thompson Herah later wrote on her social media page "Back on the track after 9 months is a good feeling. I am a little race rusty but a girl is ready to take on any obstacles in her way. Also racing as a wife am sooo happy 😃 lord you are worthy I hope for nothing but health and healing 🙏🏾. Looking like 16😜."

Forbes finished third in 23.45 and her Sprintec teammate Ronda Whyte was fourth in 23.93.

Tajay Gayle, who stunned the world on September 28, 2019, to win the gold medal in the men's long jump at the IAAF World Athletics Championships in Doha, also returned off a long break, partially forced by the COVID-19 lockdown, to secure victory.

Shanieka Ricketts, who won the silver medal in the triple jump at the 2019 IAAF World Athletics Championships in Doha, also took victory at JC.