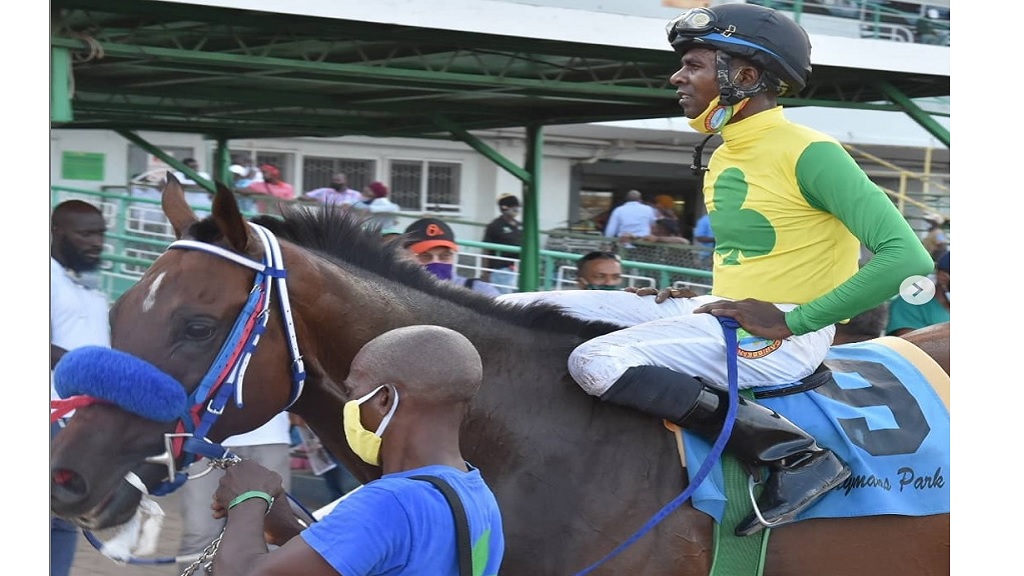 FATHER PATRICK, with former six-time champion jockey Omar Walker, poses in the winner's enclosure after winning the Betting, Gaming and Lotteries Commission Trophy, over five and a half furlongs, at Caymanas Park on Saturday, August 1, 2020. (PHOTO: caymanasracing.com).

Walker has been aboard FATHER PATRICK,  the 3-5 favourite, for his five career victories, including a strong win at six and a half furlongs on July 4.

Parsard and Walker, who rode a three-timer, teamed up for a second winner, BLIND FAITH, who caught 99-1 outsider, SUPER AMIA, a furlong and a half out in the sixth event at six and a half furlongs.

Walker, who opened the programme with 1-9 favourite, FABULOSITY, at five furlongs round, remained third in the jockeys' standings on 23 winners, eight behind leader Dane Nelson and one adrift of second-place Anthony Thomas.

Meanwhile, Wayne DaCosta, whose 13-year reign atop the trainers' ranks was halted last season by Anthony Nunes, broke a lean spell by saddling a two-timer on the 10-race card.

DaCosta's SUPER DUPER made all to land the Charles Randle Trophy, the first two-year-old race of the season at three furlongs straight. The bay filly won at odds of 2-1, the first of two winners for journeyman rider, Phillip Parchment.