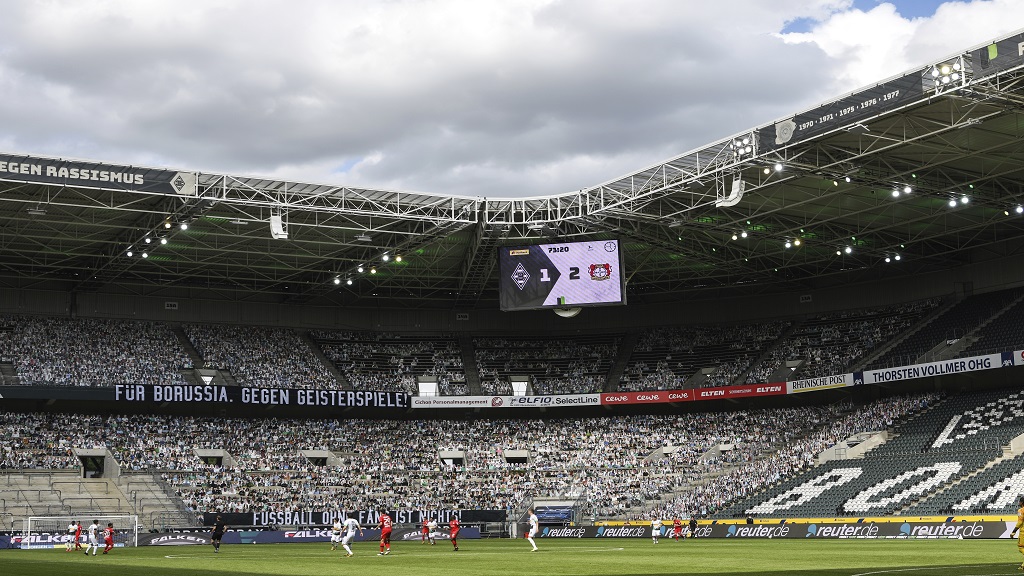 A banner reading "For Borussia, against ghost matches" is displayed during the German Bundesliga football match between Borussia Moenchengladbach and Leverkusen, in Moenchengladbach, Germany, Saturday, May 23, 2020. (Ina Fassbender Pool Photo via AP).

Bayer Leverkusen, with Jamaica international Leon Bailey, scored an away 3-1 victory against Borussia Mönchengladbach in the Bundesliga on Saturday at Borussia-Park.

Bailey came off the bench in the 66th minute.

Havertz enhanced his reputation further amid talks over a big-money move to the Premier League by scoring twice in a 4-1 thumping of Werder Bremen last weekend when the Bundesliga resumed.

The 20-year-old starred again on Saturday, helping himself to a goal in each half as Leverkusen stretched their unbeaten run to 12 matches in all competitions.

Forward Havertz opened the scoring early on and struck again with a contentious penalty to take his tally for the season to 14 after Marcus Thuram equalised early in the second half.

Sven Bender's header made sure of the points for Peter Bosz's impressive side in a game played behind closed doors, with Gladbach supporters probably glad to it was cardboard cutouts rather than actual fans watching on in the stands.

Havertz wasted no time in making his mark, taking a nicely weighted pass from Karim Bellarabi and sliding home to round off a swift break and make Gladbach pay for giving the ball away cheaply just seven minutes in.

Breel Embolo was replaced by Lars Stindl after taking a kick on the leg before Yann Sommer spared Gladbach further pain when he denied the lively Bellarabi.

Lukas Hradecky had been little more than a spectator at the other end, but he breathed a sigh of relief after getting away with failing to hold a Florian Neuhaus drive five minutes before the break.

Leverkusen should have doubled their lead just prior to the interval, when Havertz's left-footed effort struck the crossbar and Kerem Demirbay's follow-up effort was blocked by Nico Elvedi with the goal gaping.

Thuram levelled seven minutes into the second with a clinical right-footed finish after he was played in by Alassane Plea and he ought to have put Leverkusen in front soon after too, but was thwarted by Hradecky after racing through.

It was Havertz who was celebrating a brace soon after, though, slotting just to Sommer's right from the spot after Elvedi was somewhat harshly adjudged to have fouled Bellarabi when he was in the process of firing wide.

Also on Saturday, Bayern Munich and Borussia Dortmund warmed up for what is sure to be their quietest ever Bundesliga clash by winning their respective games.

In stadiums with no spectators due to strict hygiene measures against the coronavirus, Bayern routed Eintracht Frankfurt 5-2 after Dortmund laid down the challenge with a labored 2-0 win at Wolfsburg.

Goals from Leon Goretzka, Thomas Müller and Robert Lewandowski had Bayern in cruise control but Frankfurt defender Martin Hinteregger scored twice in three minutes to set up an exciting finale.

Alphonso Davies steadied Bayern’s nerves before Hinteregger’s own goal capped a remarkable game for the center back.

“It was one of the nicest own goals I scored,” Hinteregger joked.

The win kept Bayern four points ahead of Dortmund ahead of their meeting on Tuesday, a game that will go a long way to deciding the championship – assuming the remaining seven rounds go ahead.

The league resumed last weekend after its pandemic-induced two-month break and players must undergo regular testing for COVID-19 before they are cleared to play.

Like last weekend, players wore face masks on arrival for all games on Saturday, while those who didn’t start kept them on and maintained their distance. Balls were disinfected, and officials conducted pregame interviews at a distance with microphones mounted on poles to keep TV reporters at bay.

The German football federation (DFB) sent a letter to the clubs during the week warning them that society and politicians were watching closely after some criticism of goal celebrations that went too far the previous weekend.

Hertha Berlin players celebrated freely in their 3-0 win at Hoffenheim last week but made a point of refraining in the 4-0 derby win over Union Berlin on Friday.

The DFB said local health authorities could consider TV images when deciding on imposing quarantine measures on teams in case of a positive result for COVID-19.

Dortmund struggled against Wolfsburg but scored with their first real chance through Guerreiro in the 32nd minute. Julian Brandt cleverly played in Hakimi, who sent Thorgan Hazard through. Hazard cut the ball back for Erling Haaland –- who missed it -– but Guerreiro was there to sweep the ball to the net.

Dortmund defender Mats Hummels went off at the break.

“Mats has problems with his Achilles tendon. We hope that he can play on Tuesday,” Dortmund sporting director Michael Zorc said.

Renato Steffen hit the crossbar with Wolfsburg’s closest chance right after the break when the home side dominated.

But Wolfsburg were caught on a counterattack led by Jadon Sancho in the 78th, when Hakimi fired in the far corner.

Wolfsburg’s Felix Klaus was sent off minutes later with the help of VAR after catching Manuel Akanji’s calf from behind. He looked dismayed to be sent off but left the field without protest.

Zorc confirmed before the game that Mario Gotze will leave once his second spell at the club ends in the summer.

Also, Werder Bremen held on for a 1-0 win over Freiburg, which had a late equalizer ruled out through VAR after Bremen midfielder Philipp Bargfrede was sent off, and last-place Paderborn drew with Hoffenheim 1-1.