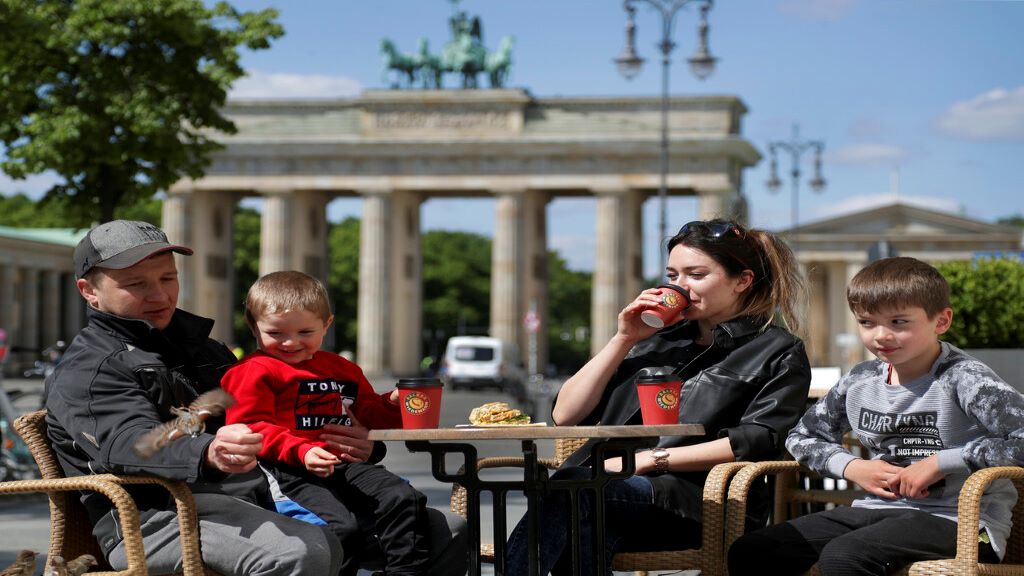 From left, Tejmur, Naile, Layla and Emil Hacimuradov from Neuwied enjoy to feed sparrows as they have breakfast in a bakery at the Brandenburg Gate in Berlin, Germany, Friday, May 15, 2020. After month of a nationwide lockdown restaurants are reopening in more German states on Friday. (AP Photo/Michael Sohn)

Germany and several other European countries where the coronavirus spread has slowed were moving ahead Friday with relaxing border restrictions, while flare-ups in Mexico and elsewhere served as a reminder the pandemic is far from over.

Slovenia, which has been gradually easing strict lockdown measures, declared that the spread of the virus is now under control and that European Union residents could now enter from Austria, Italy and Hungary.

Germany, meantime, was preparing to open its border entirely with Luxembourg at midnight, and increase the number of crossings open from France, Switzerland and Austria. Travelers will still need to demonstrate a “valid reason” to enter Germany and there will be spot checks, but the goal is to restore free travel by June 15.

Germany's states have also agreed to drop a mandatory 14-day quarantine for travelers entering from the European Union and several other European countries, including Britain, said Armin Laschet, the governor of the western state of North Rhine-Westphalia.

“Germany will only overcome the corona crisis if European freedom of movement for people, goods and services is fully restored,” Laschet said.

Austria and Switzerland were also moving ahead with easing some border restrictions, and Austria reopened all cafes and restaurants.

“I have been having breakfast at this café for about 100 years,” said Helmut Gollner, a former literature professor who was one of the first guests Friday morning at Vienna's Cafe Sperl. "My wife always made great breakfast but it’s a different atmosphere here with the newspapers and so on.”

Restaurants were reopening in more German states Friday as well, and the country was to resume professional soccer on Saturday after a two-month hiatus.

The Bundesliga plans five games with no fans present and other precautions, including the Ruhr derby between Borussia Dortmund and Schalke.

In Sydney, many cafes and restaurants opened again Friday as New South Wales, Australia's most populous state, granted permission for them, as well as places of worship, to reopen with up to 10 people so long as distancing rules are in place.

Many Catholic churches across the state opened for private prayer, confession and small-scale Masses.

“The celebration of Mass is the highest form of Catholic worship and to not be able to physically gather these past two months has been very difficult,” Sydney’s Archbishop Anthony Fisher said in a statement.

In Japan, some schools, restaurants and other businesses started to reopen after the country lifted its national coronavirus emergency, while keeping in place restrictions in limited urban areas like Tokyo where risks remain.

As countries move ahead with relaxing restrictions, the head of the World Health Organisation's Europe office, Dr Hans Kluge, warned that distancing guidance and other protective measures were more important than ever.

“It’s very important to remind everyone that as long as there is no vaccine and effective treatment, there is no return to normal," he said on French radio Europe-1.

"This virus won’t simply disappear, so the personal behaviour of each of us will determine the behaviour of the virus. Governments have done a lot, and now the responsibility is on the people.”

Worldwide, there have been more than 4.4 million coronavirus infections reported and 300,000 deaths, while nearly 1.6 million people have recovered according to a tally kept by Johns Hopkins University.

A first case was confirmed among the one million refugees from Myanmar living in dire, overcrowded conditions in southern Bangladesh. Another, a local person living in the Cox's Bazaar district, also tested positive, refugee commissioner Mahbub Alam Takukder said.

Aid workers have been warning of the potential for a serious outbreak if the virus reaches the camps, and teams were activated to treat patients and trace, quarantine and test people they may have encountered.

Somalia's official death toll hit 53, but aid groups and authorities say that figure could be far too low in a country with one of the world's weakest health systems, after three decades of civil war.

Ahead of Mexico's plan to partially reopen key industries such as mining, construction and auto plants on May 18, authorities sounded a note of concern as the country reported its largest one-day rise in coronavirus case numbers.

There were 2,409 new COVID-19 test confirmations Thursday, the first time that number has exceeded 2,000 in one day.

“We are at the moment of the fastest growth in new cases,” said Assistant Health Secretary Hugo López-Gatell. “This is the most difficult moment.”

Deaths have neared 4,500 and there were signs that hospital capacity was nearing its limit in Mexico City, the hardest-hit area. The Health Department reported that 73 percent of the city’s general-care hospital beds were full; the percentage was lower for intensive-care beds, but that was partly because of the expansion of improvised ICU units at hospitals and other venues.

In Brazil, news website G1 reported that 900 people in Rio de Janeiro were waiting for an intensive-care bed in one of the state’s overwhelmed units. President Jair Bolsonaro warned of looming “chaos” as he once again lambasted governors and mayors who introduced lockdowns in cities to limit spread of the new virus.

“I’m sorry, many will die, but even more will if the economy continues to be destroyed by these measures,” Bolsonaro told journalists in Brasilia on Thursday. “These lockdowns, closing everything, is the path to failure. It will break Brazil.”

Colombian President Ivan Duque has ordered all residents of the Amazonas Department, near the border with Brazil, to stay inside except to buy food or get medical care. Local hospitals are being overwhelmed as cases rise in a vulnerable part of the Amazon, home to many indigenous groups.

In the US, the Grand Canyon National Park was reopening Friday to allow visitors in for day trips but not overnight.

As a number of regions in New York were to reopen, Gov Andrew Cuomo urged local governments to keep a close eye on key metrics, and that people and businesses were complying with distancing rules.

Amid those and other reopenings, protests and debate persisted over how quickly to end shutdowns.

With more than 1.4 million infections and more than 85,000 deaths, the US has the largest outbreak in the world by far.

Fractures in many nations widen as virus lockdowns ease

Trump 'not sure we even have a choice' on reopening states