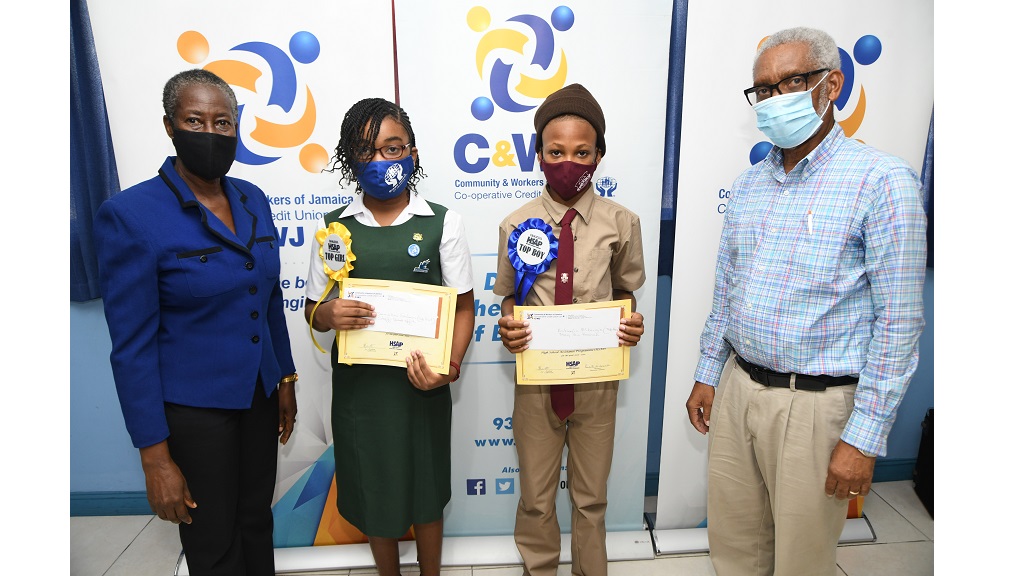 Parents of 129 students will find it easier to finance their children’s education this school year through scholarships and bursaries of $2.6 million under the Community & Workers of Jamaica Co-operative Credit Union Limited (C&WJCCUL) High School Assistance Programme (HSAP). Each bursary is valued at $20,000 and scholarship $50,000.

The presentations were made recently at the head offices of the credit union on Half Way Tree Road in St Andrew, while observing COVID-19 protocols, including sanitising, social distancing and mask wearing.

Over the past 10 years, since the credit union introduced HSAP, 1,000 students have benefited, with an average of 100 students benefiting each year.

Two top students were selected from among this year’s beneficiaries, each of whom received $50,000 in scholarships.  The Top Boy is Antwoun McKenzie, who began studies at Glenmuir High School in this month and whose mother, Charlene Robinson, is a member of the C&WJCCUL May Pen Branch.  The Top Girl is Dannielle Graham, a first former at Vere Technical, whose parents are members of the Jamalco Branch.

“I am so proud of  Antwoun.  He is a good young man, who has done well in school all his student life,” said mother Charlene.

A seemingly shy young man at first meeting, he is very competitive with his sisters and confident about his academic work.

According to Antwoun’s mother, when he heard that he had been placed at Glenmuir High, which was his first choice, he said:   “I told you so!” She said he has maintained 90s in Maths, his favourite subject, since basic school.  The scholarship fund will be used to buy Antwoun a well needed laptop.

The C&WJCCUL Top Boy said he was excited - and so was his mother-  when they  got the call from the credit union to say he was awarded the scholarship. “But I have always been the top boy in my class!” he said in a matter of fact attitude.

Edward Graham, father of Top Girl, Danielle Graham was bursting with pride at the presentation event.  He said his daughter would be going into her second year at Vere Technical High School.  He said the $50,000 scholarship would assist with books, uniform, lunch and transportation from the family’s residence in Mineral Heights to Vere.

“I am very happy with what I have accomplished so far as I study every day,” Danielle said.  “I adore doing school work. I am intense and so into learning!” she continued. Also, she loves to read because she learns new words every day.

In addressing the students, President of C&WJCCUL, Condell Stephenson, recognised the high level of essays submitted as part of the applications received from the students.

“Some of the essays were so artistic and expressive,” he noted.

WATCH: Shenseea giving away more than 100 tablets to help students