COVID 19: through the eyes of an Indian living in New Delhi 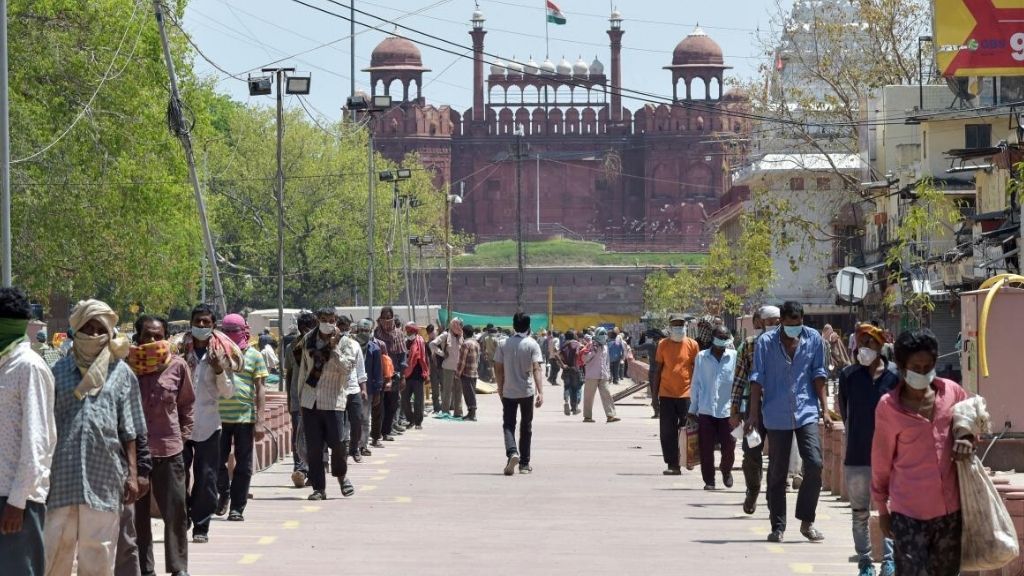 People stand in a queue to collect free food near Shish Ganj Gurudwara during the nationwide lockdown to curb the spread of coronavirus, at Chandni Chowk, in New Delhi, Sunday, April 12, 2020. Credit: PTI Photo

There have been pros and cons of this pandemic. To halt a nation the size of India which touts 138 billion citizens, was no small undertaking.

I remember the initial days of COVID-19, when the ‘Janta Curfew’ was implemented on March 22, 2020. It made a world record.

At 5 pm, the world watched as each citizen of India showed love and respect to Prime Minister Modi by going inside their homes and clapping their hands.

Local factories shut down, halting the pollution level. Places like New Delhi, that have historically witnessed polluted skies from the smog, enjoyed clear skies for the first time in decades. Glacial caps, animals and even dolphins could be seen in Mumbai.

First time re-runs of epic series like Ramayana and Mahabharat shattered movie ratings and exceeded records set by series like Game of Thrones. Metro cities like New Delhi and Mumbai (city of dreams which never stop) rely on a migrant workforce yet COVID brought that workforce to a screeching halt.

During the shutdown, migrant workers lost their jobs, and returned to their villages seeking food, security, and a need to be with family. These movements lead to a compromise in the rules of social distancing. Due to the high population, transport facilities were limited, which created a spike in daily COVID cases.

India now ranks number 3 in the world for COVID-19. This has come with macro challenges and geopolitical risks...

In India’s pursuit of becoming a more independent nation, Prime Minister Modi devised a movement entitled “Made in India”. This movement is India’s opportunity to take advantage of the trade war between the United States and China. China has monopolized every aspect of production worldwide. From food to technology, the infamous label “Made in China” will hopefully eventually change to “Made in India.” Until COVID-19 is stabilized, this dream will not reach fruition anytime soon.

Additionally, Modi encourages citizens of India to publicly vocalize and encourage foreign nationals to purchase and use local products. Modi’s slogan during the COVID shutdown read “local products getting vocal".

With the beginning of demonetization in 2016 and the introduction of the Goods & Services Tax (GST), and with unemplyment at its highest level in 45-years, the Indian economy was slowing down before COVID-19. Now one out of every four people are unemployed. Major credit rating agencies such as FITCH, S&P, Moody’s, as well as the IMF have lowered their GDP forecast for the economy.

No country can grow if the youth remain uneducated and fall behind. Large groups of Indian citizens either cannot afford internet access or do not have the means to purchase computers or iPads for education.

The schools and colleges are closed due to the pandemic, impacting not only the educational growth of Indian students, but delaying job prospects for University students as well.

Indian citizens have always used yoga and Ayurveda to boost their immunity levels. These same practices helped Indian citizens achieve a recovery rate of around 63 per cent and a mortality rate as low as 4 per cent from COVID-related symptoms.

The successful trial of the COVID vaccine by India's Bharat Biotech became the first biological therapy in the world to be approved for treating patients with moderate to severe COVID-19.

India is reviving, revitalizing its strength and returning to basics.

Instead of hugging and shaking hands, Indians are using ‘Namaste’ which means “I am respecting the soul within you.”

Lockdowns reimposed in India as virus cases near 1 million